The answer is a "Yes!" as enthusiastic as Santa’s "Ho Ho Ho!" for Binu Mathews, 51, an occupational therapist from East Northport, whose family of six each year at Christmas dons matching jammies and takes a family photograph for posterity.

"The pictures are really cute to post on Instagram," says Mathews’ oldest child, Aliya Masihuddin, 19, a student in a joint bachelor’s and medical degree program. The portraits now include Mathews, her fiance and her four teenage children, and some years, even their American Eskimo pup. Just don’t try to dress the cat, Mathews warns. "The cat won’t wear it, so forget about it," she says. 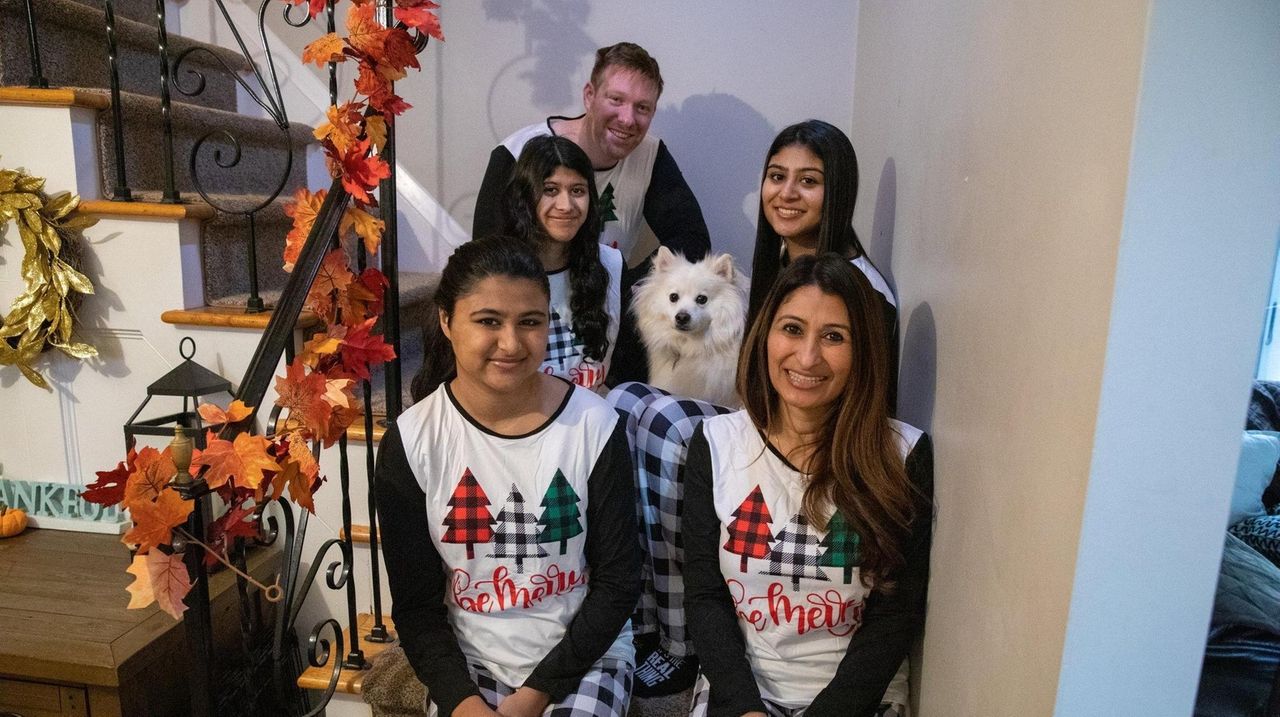 But it’s not just for the picture, of course, that the family makes the effort to be matchy-matchy. "I feel like it brings us together on Christmas day," Masihuddin says.

The trend has gained momentum over the years as department stores such as Kohls, specialty companies such as Hanna Andersson and online websites such as Pajamagram.com promote their offerings. Companies advertise family models in their bedtime duds decorated with Christmas trees, or strings of holiday lights, or trains from "The Polar Express." Real families, in turn, post their own family pajama snapshots on social media.

Last year, the company offered just one choice of holiday print for families; this year, they offer seven choices, including a royal blue set with dreidels on it that Cohn says she, her husband and her two young children wore for the first night of Hanukkah.

For the Long Island families who are adopting the PJ tradition, it typically means going to bed in the jammies on Christmas Eve and then enjoying the whole of Christmas Day in the sleepwear. The tab for their matching duds can sail toward $200, families say.

Jenna Emmerich, 34, of Medford, is a professional photographer and she says she has seen an increase in the number of families wanting pictures in their matching pajamas. "Oh my God, so much more than ever. It’s crazy," she says. "It’s more than just Christmas. Hanukkah now, too. You see it at Halloween, too. It’s a whole thing."

She’s on the bandwagon as well — she bought three sets of matching holiday jammies for her husband and her 6-year-old son for this year. "We’re obsessed with Christmas," she says. And besides, she says, "Really, who doesn’t love wearing pajamas?"

Even people without children embrace the trend. Ashley Edel, 26 of Huntington, who works in insurance, and her boyfriend, Michael Nicolosi, 25, of Connecticut, coordinate with Edel’s dogs. She had four, but one of them recently passed, so the photo this year will feature the couple with three pups all dressed in PJs dotted with pine trees, holly and wreaths.

"It’s so much fun because everybody’s in the same outfit. Anything to get in the Christmas spirit. Everybody loves the pictures standing in front of the Christmas tree," Edel says.

‘SOMETHING SPECIAL TO DO’

Bayer-Hempfling says she tries to have the family don their duds for a short period sometime prior to Christmas Day to shoot an annual family portrait. "Christmas Day we’re so busy, we actually forget to get everybody in a picture. Someone is always missing." She’s continuing a matching pajamas tradition that her own parents started with her and her siblings when they were growing up, and she says she thinks the tradition has mushroomed due to social media, where families see other families’ photos and decided to adopt the practice as well.

Jessica Sullivan, 35, of Port Jefferson, buys matching pajamas for her children and their cousins every year. Next: Binu Mathews, 51, an occupational therapist from East Northport buys her family matching pajamas for an annual Christmas photo. Bottom: Ashley Edel, 26 of Huntington, and her boyfriend, Michael Nicolosi, 25, of Connecticut, coordinate with Edel’s dogs for their holiday pajamas.

Danielle Costagliola, 35, a children’s librarian from Mount Sinai, launched such a tradition with her 4-year-old fraternal twins and her parents this year; she presented everyone with matching PJs while on vacation together earlier this fall at Great Wolf Lodge in the Poconos, and they snapped a family photo in front of the lodge’s enormous holiday tree. Costagliola says she plans to use it for the family Christmas card. The pajamas have black and red buffalo plaid bottoms, and each person’s shirt has a wolf and identifies them as "Pop Pop Wolf" or "Brother Wolf." "It’s something special to do with the grandparents," Costagliola says.

Jessica Sullivan, 35, a real estate agent from Port Jefferson started buying matching pajamas just for her own children after her oldest, now 9, was born. When her husband’s siblings started to have children, she gifted the PJ sets to her children’s cousins as well. This year she bought for seven children ages 8 months to 9 years.

"I go with Hanna Andersson because they’re really durable and they last the whole year," she says. But because that brand is expensive — full price can be $48 a pair — she shops the company’s Veterans Day sale and uses coupon codes. "This year I spent $125 for seven pairs of pajamas," she says. The kids wear them when they gather on Christmas Eve at Sullivan’s in-laws house to watch a movie and drink hot chocolate, and then they go home and wear them to bed. "I think it’s just really fun," she says.

Mathews asks her teenagers for their input into each year’s chosen design. "The kids will say, ‘We did red already, let’s do a different color,’" Mathews says. She shops at whatever store is least expensive, which can include Kohls or Walmart. "I try to get a coupon," Mathews says. "It’s close to $200 because there’s a lot of us." But it’s worth it because the kids keep wearing their pajamas all winter, and they often need new jammies anyway because they grow bigger each season, she says.

Not all the family members are all-in on the tradition at this point, Mathews says. Her 18-year-old son says "this is so lame," she says, but he will agree to wear the bottoms. He may be doing that for quite a few years, as Mathews says she plans to keep the tradition going indefinitely. "Until I run out of pajama prints."