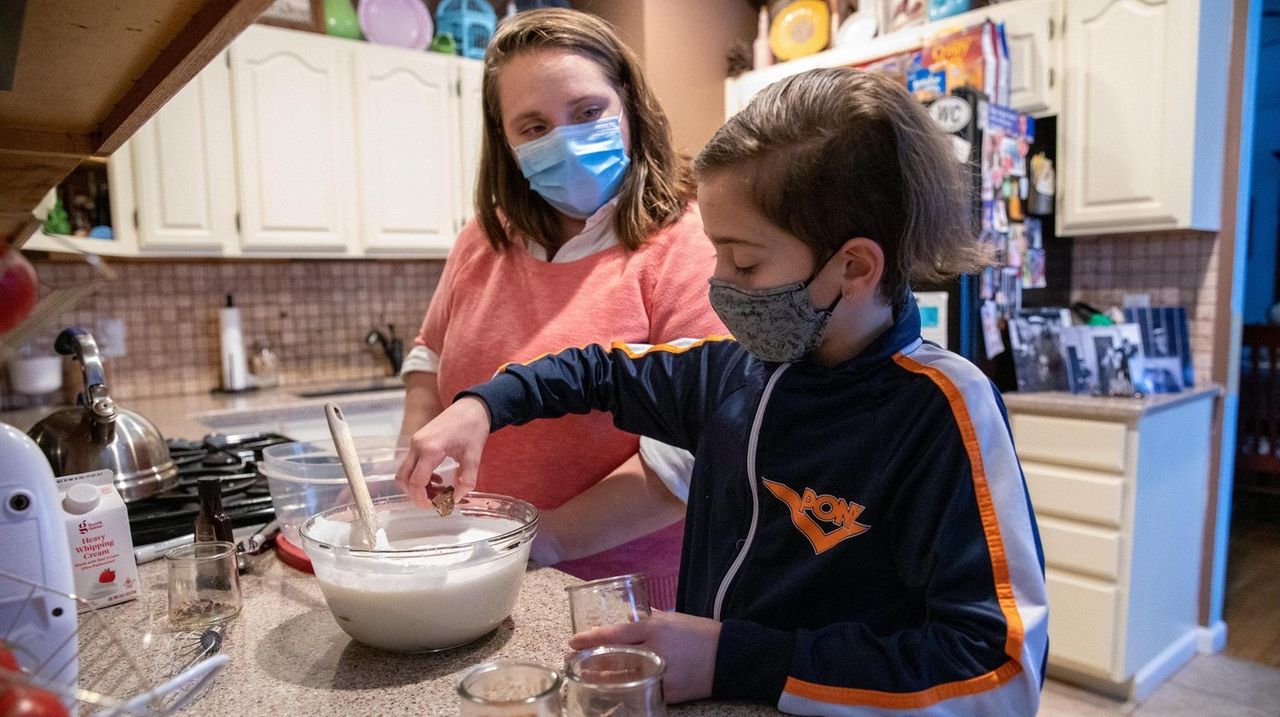 Jennifer Lopez, of Central Islip, enjoys making homemade ice cream with her daughter so they can both work on something together. Credit: Morgan Campbell

My husband and I had just formed nests of flour on our kitchen island and cracked eggs into their centers. We were making homemade pasta for the first time, our weekend entertainment during this era of limited options. We had our hands in the mixture, kneading it and getting it stuck on our fingers, when I said to him, "This is like Play-Doh. Kids should be doing this."

Apparently, I’m not alone in my thinking. Families across Long Island are expanding their repertoire of food as fun — making more than just the old standby chocolate chip cookies (although those are delicious as well). In addition to homemade pasta, my husband and I have made our own ice cream, sushi rolls and fondue during this pandemic. Here’s how your family can get in on the act.

Marie Saracena, 39, of East Islip, who works in e-commerce, gives each of her children, Jacob, 11, and Ella, 8, their own hill of regular flour to work with. They make a well in the middle. "They crack the eggs, because they like to crack the eggs," Saracena says. They knead the dough and then make a ball that they set aside to rest for an hour.

After that, they pull off small sections of the dough and feed them into the pasta maker that Saracena purchased for less than $30 on Walmart.com. "They love seeing it come out as noodles," Saracena says. And then, of course, there’s the cooking and eating part.

"It’s fun to make the volcano-like shape and add the eggs," Jacob says. "It’s fun creating something by hand instead of taking it out of the box and putting it in boiling water."

Mom says making pasta for the first time during the pandemic was "life changing." "We never want to buy a boxed pasta again," she says.

What you'll need: Heavy whipping cream, a small can of condensed milk and a sweet tooth.

My husband and I make our ice cream in an ice cream maker I purchased from Macy’s, trying out Nutella gelato, butter pecan ice cream and vanilla with M&Ms. Mia Cespites, 10, of Massapequa, and her dad, Gregory, 47, an equipment operator, are also fans of an ice cream machine.

They experimented by adding ricotta and chocolate chips to their recipe. "I really like cannolis," Mia explains. "It came out really good."

But it’s not necessary to be so fancy if you have a handheld mixer in the house, says Jennifer Lopez, 37, a stay at home mother from Central Islip who makes ice cream with her daughter, Charlotte, 9.

They use a pint of heavy whipping cream that they whip until it’s a little bit stiff, and then they fold in a small can of condensed milk. "She enjoys holding the hand mixer," Lopez says of her daughter. Sometimes they add cocoa powder or some vanilla extract.

And always they add mix-ins. Their favorite? "Oreo pieces," Charlotte says. They’ve had some ice cream fails — once they tried adding chopped strawberries, but when the mixture froze, the water in the strawberries formed little crystals that made them crunchy, Jennifer says.

After the mixture is in the freezer for a few hours, it’s ready to eat. Does it taste as good as store-bought? "It tastes better," Charlotte says. Their recipe makes enough to feed their family of three each a satisfying bowl, Jennifer says.

What you’ll need: Nori, sushi rice (or bananas) and a pinch of patience.

A sushi kit of bamboo mats and other items to make sushi rolls sells for about $30. When my husband and I made sushi, we purchased nori and sushi rice online as well. Raw fish was a little too advanced for us, so we stuck to cooked shrimp and avocado for the filling.

The hardest part was getting the rolls tight and symmetrical. On our first try, they were pretty funny looking, but we enjoyed them anyway.

To introduce her children to the concept of sushi, Alissa Lewis, 38, a registered dietitian from Huntington, makes what she calls "cereal sushi." She slices a banana into rounds, and her children, Sophie, 5, and Jack, 3, roll them in cereals such as Rice Krispies or Cheerios, using some Greek yogurt to help the cereal stick. Then they choose from toppings she puts out, such as raspberries. "I put all the stuff out like a taco station," Lewis says. "I was trying to show my kids how to use chopsticks."

Sophie already loves salmon and avocado rolls, and Lewis says she may advance to making those with the kids one day.

Catherine Hoang, 39, a teacher from Huntington, has her son, AJ, 5, help her make a spinach, artichoke and cheese fondue. "My son will help chop the artichoke, he’ll help grate the cheese because it takes four different types of cheeses," Hoang says. "We can all just sit around and we can all share it."

The Saracena family has a tradition of having fondue every Valentine’s Day. "We used to go to the Melting Pot, but we decided it’s more fun to do it ourselves at home," Saracena says.

They melt a cheese fondue recipe (many can be found online) on the stove and transfer it to their fondue set (some fondue pots allow you to melt the ingredients inside them, they sell for about $40). Their set came with metal forks so they each have one.

For the cheese segment of the meal, they cut up bread, cauliflower and apples. For dessert, they melt chocolate and dip in strawberries and chopped Rice Krispie treats. "I like making it," says Ella, 8. "It’s fun to see the progress of melting it and then eating it."

2:38
Adventureland opens its doors again after 18 months of being closed
1:14
Long Island family heads back out to celebrate birthday
2:09
Where to find nostalgic toys on Long Island
1:26
Father and son bond over vintage video games
0:18
Sitting in traffic
Didn’t find what you were looking for?