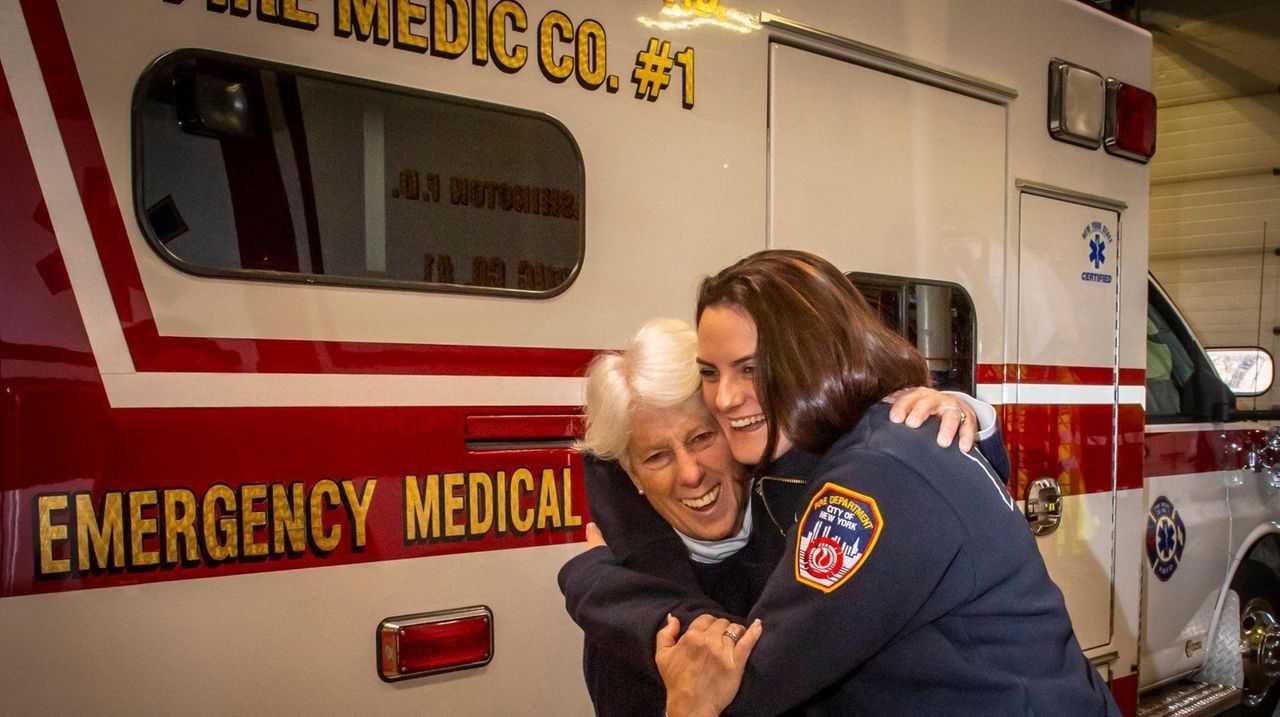 Everyone knows the expression, “Like father, like son.” But what about “Like mother, like daughter”? Meet four Long Island daughters who followed their moms' public service career paths – a police officer, an EMT, a government employee and a nurse.

'It’s the best job in the world'

DID TAYLOR ALWAYS WANT TO BE A POLICE OFFICER? Both Taylor’s mom and dad were officers, and they have photos of Taylor as a toddler wearing a police shirt and play gun belt. “I always just remember it being really cool. In kindergarten or first grade, they’d come into the class and talk to us about being officers," Taylor says. "As I got older, I didn’t know anything else. I didn’t have a parent who was an accountant or a business person. I have vivid memories of them coming home in their uniforms.”

WHAT DREW TAYLOR TO THE JOB? She likes that the job is active, she says. She started out as a patrol officer responding to radio calls. “I think it’s the best job in the world. You get to interact with the public every day. You’re usually there to help somebody in the worst situation people are in,” she says. She recently was promoted to detective.

WHAT IS IT LIKE HAVING THE SAME CAREERS? When Taylor became a police officer, she was able to use her mom’s shield, number 1857. “It was a nice honor after she wore it for 22 years,” Taylor says.

DID ERIN ALWAYS WANT TO BE AN EMT? Erin’s parents met while on the job: Erin’s father, Tom, who was a firefighter, drove the ambulance and Pam was the EMT on board. When Erin was a baby, Pam used to bring her to Fire Medics Co. 1 meetings in a car seat. When Erin was a teenager, she became a junior firefighter. The path seemed set.

WHY DOES ERIN LOVE THE JOB? “I like how it’s challenging. You do your best to figure out what could potentially be causing a patient’s symptoms from how the patient is positioned, what was going on around them,” Erin says. “We like to call it EMT detective work.” The EMT then transmits a thorough assessment to the doctors at the hospital.

Nursing 'set this fire inside of me'

DID MEGHAN ALWAYS WANT TO BE A NURSE? “She always said she wanted to be a writer for ‘Saturday Night Live,’ ” mom says. But in Meghan's junior year in high school, she began to volunteer at a hospital. She told her mom, “I’ve seen through you what nursing can be.” Meghan’s late grandmother — Kerri’s mom — had also been a nurse and served as the director of nursing at a long-term care facility in Smithtown.

WHEN DID MEGHAN MAKE HER CHOICE? “I was a junior in high school and I had been volunteering in a hospital. The day I was assigned to shadow nurses, it just felt right," Meghan says. Everything they were doing completely inspired me and set this fire inside of me as well. That’s when I felt, ‘This is the profession I feel called to.’ Being in the hospital can be a terrifying time for some people. Being able to interact and care for someone when they’re in their most vulnerable state is an absolute gift.”

WHAT’S IT LIKE HAVING THE SAME CAREERS? “It’s a gift to have her there by my side,” Meghan says. “She was kind of like my guru, my mentor.” Says Mom: “I’m so proud.”

DID COMPITELLO ALWAYS ENVISION GOVERNMENT SERVICE? “That’s kind of the way I grew up,” Compitello says. Her mom was always involved in public service, working for the town. “I realized the gratification of trying to help people,” Compitello says. She was elected town clerk in 2018.

WHAT’S IT LIKE HAVING THE SAME CAREERS? “She kind of paved the way,” Compitello says of her mom. “I still call her about clerk stuff sometimes. I got my community service genes from my mother.”

2:38
Adventureland opens its doors again after 18 months of being closed
1:14
Long Island family heads back out to celebrate birthday
2:09
Where to find nostalgic toys on Long Island
1:26
Father and son bond over vintage video games
0:18
Sitting in traffic
Snowmen across Long Island: Submit your photos
Didn’t find what you were looking for?