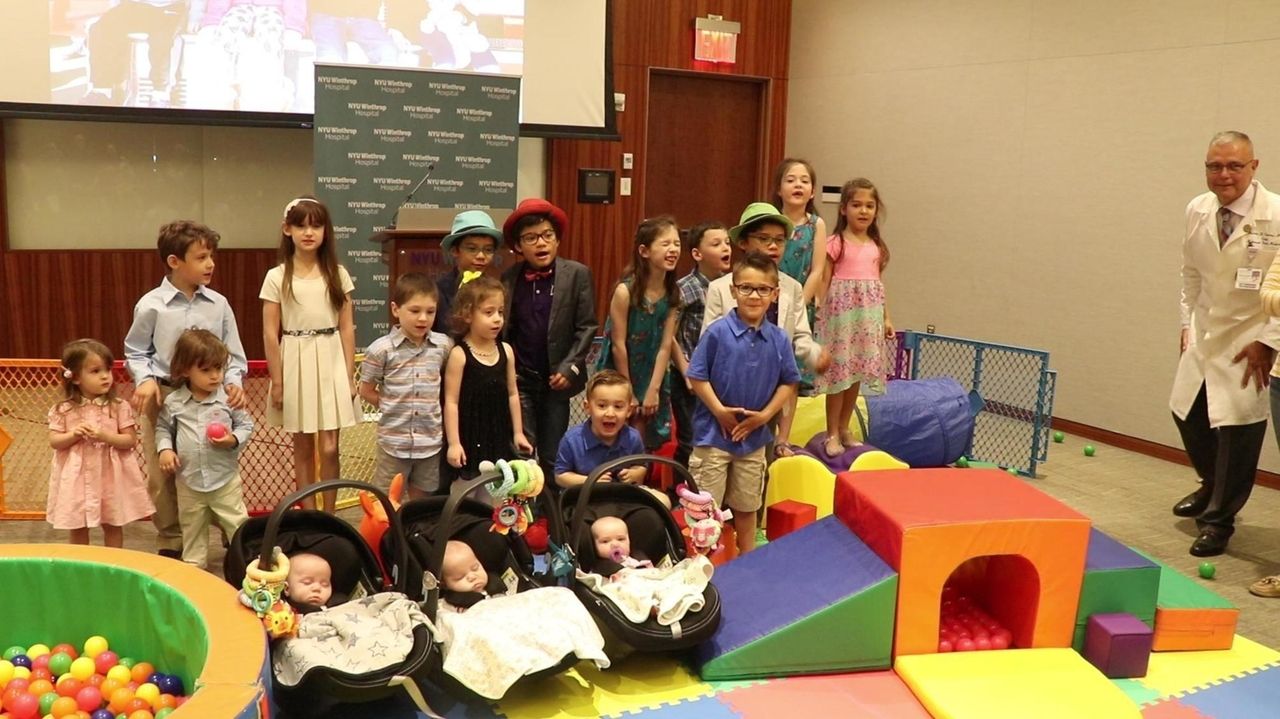 On Friday, at NYU Winthrop Hospital, the families of triplets that were born at the hospital got together for a reunion and shared stories of being a mother and their thoughts on being a parent to triplets. Credit: Jessica Rotkiewicz

A third baby is the charm for these seven Long Island families.

Each year, mothers of triplets and their families come together at NYU Winthrop Hospital in Mineola for a Mother’s Day celebration in multiples. On Friday, seven families swapped tips and experiences, as the kids — 21 triplets who were delivered at the hospital and their siblings — enjoyed cake and goody bags.

From carrying cases of juice boxes to buying color-coded outfits, seven mothers told Newsday how they make it work with multiples and why they wouldn’t change a thing.

After eight years of experience, Abelarde, 33, said she feels almost like an expert. Her biggest tip for other parents is not being afraid to ask for help. Abelarde, a single mom and nurse anesthetist, had her boys at age 24 and relied on her family and support group to get through the earlier years.

Now that they’re older, things are easier. Sure, she has to hide vegetables in their meals — “noodles, that’s where you cheat the vegetables.” — but they can pour their own cereal and get dressed by themselves, too. The boys choose outfits in green, red and blue so people can tell them apart.

“They’re old enough that I can also bribe them and say if you don’t do your homework, no video games,” Abelarde said.

Now she’s worried about girlfriends. “I’ll have to deal with that soon,” she said.

“When they were infants, it was all about having their formula measured out on the counter, ready to go,” Katsavos, 37, said. “Now I’m flying by the seat of my pants.”

Katsavos said the hardest part of having triplets is finding time to treat each child as their own person. She and her husband, Teddy, try to come up with activities for the kids and will take at least one of them on trips to the store or out to lunch.

At 7:30 p.m., the kids go to sleep and it’s time for Katsavos to relax while folding laundry and watching “Grey’s Anatomy.”

Malloy, 40, said it’s been easier than one would think to have triplets. In 2015, Malloy and her husband, Brien had a fourth child, Egan, and found raising just one to be harder.

“The triplets were mellow and low key,” Malloy, a teacher, said. “They were always very independent, they always had to wait their turn.”

The most challenging phase so far was when the triplets learned to walk, Malloy said. Then, it was toddlers everywhere and the Malloys ended up converting their basement into a large playpen. Now, the kids take care of each other, “like a little team,” she said.

Layton’s mother lives with Layton and helps care for the triplets, who just started kindergarten. Layton, a stay-at-home mom, said she’s excited for the next step and for some time to herself. The threes were the hardest for her kids — “They knew what they wanted and they could fight you about it,” she said, laughing.

Ashlyn was diagnosed with Type 1 diabetes last year but Layton said having two other children actually helped make it easier for the family. Jaxon and James help watch out for Ashlyn by letting Layton know when they hear their sister’s blood sugar monitor beep.

Polixeni said the triplets were a complete surprise. She began showing symptoms of pregnancy complications while carrying twins and doctors warned her to prepare for the worst.

“They’d initially told me to prepare for a miscarriage. I went back a week later and they said, ‘Guess what, it’s a third,’ ” she said.

Damodaran, 34, said much of her day as a stay-at-home mom is spent with her children and doing laundry. “It’s a lot of laundry,” she said. The babies still sleep for much of the day and she tries to make sure her older son, Adrian, 2, doesn’t feel left out.

At night, she and her husband, Saju, order in food and watch “something other than cartoons.”

Spivak, 40, and her husband Carson Calvo were hoping for twins when she got pregnant in 2015. But when Spivak went in for a sonogram, doctors told her to expect three. The couple had two older children.

When you have five kids under 10, you have to find a way to handle it, Spivak said. Each night she prepacks the diaper bag and the kids all eat the same meals.

“You’ll be making dinner and you have to go change a diaper and then you go back to making dinner,” she said.

Spivak, who works in the construction industry, said she’s lucky because her children are easygoing and travel well — they even like being on an airplane, she said.

Keri Witt, a teacher, and her husband, James, were expecting their first child when they found out they would get three at once.

So far, Witt, 38, said she’s relied on help from family and a night nurse to help manage the babies. It’s not often she gets time for herself, but when she does it’s for a brief shower or nap.

“People ask us how crazy it is and if we get any sleep,” Witt said. “They’re just really great babies.”