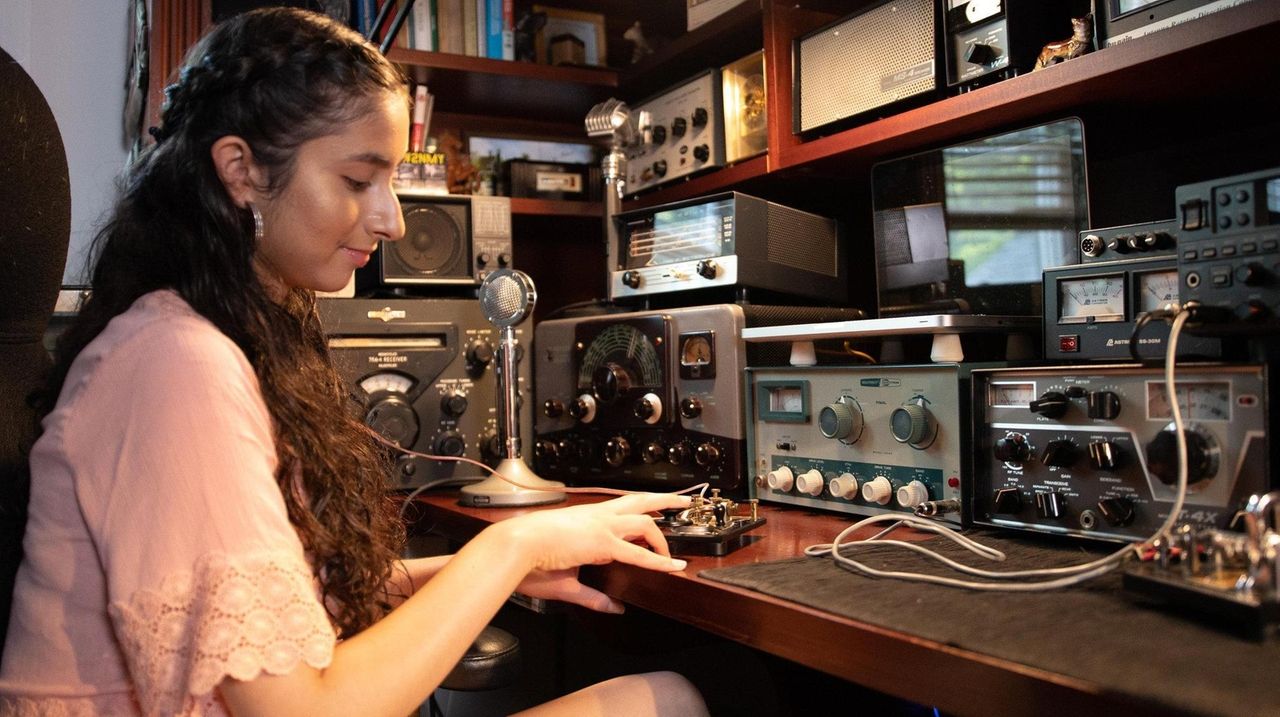 Even though Alana Bernstein of Manhasset is a 17-year-old high school senior, this spring she had to learn the alphabet all over again.

Bernstein signed up for a new, free Zoom course in Morse code created by a Long Island ham radio operators’ club to offer kids a chance to learn a new skill and stay occupied during the pandemic.

“This is a good opportunity for me to connect with people around the world, make some Morse code friends and have some fun,” Bernstein says. She finished the beginner course and is now taking a summer intermediate course that meets Mondays, Wednesdays and Fridays.

The program has reached 125 children in kindergarten through high school since it launched in March, says Alana’s father, Howard Bernstein, 68, of Manhasset. He cofounded the Long Island CW Club — the CW standing for continuous wave — in 2018 with Rich Collins, 57, a UPS driver from Hicksville. The men are known by the call signs WB2UZE and K2UPS respectively when they're on the air.

Alana says seeing her father’s passion for Morse code during her childhood inspired her to pursue the class; the fact that classes take place on Zoom has allowed children from all over the United States and Europe to participate and she’s made new friends from Wisconsin and Mississippi.

Learning Morse code is like mastering a new language, Bernstein says. The code was developed in the 1800s by Samuel Morse and other inventors, using electrical signals sent through wires between telegraph stations. It assigns a combination of dots and dashes to every letter of the English alphabet that recipients decode to translate to words.

Perhaps the best-known message is dot-dot-dot dash-dash-dash dot-dot-dot, or S.O.S.; sailors employed the letters in emergencies, and the combination came to be known as “Save Our Ship.”

“It seems today’s youth would be willing to put their phones down given a fascinating and unique alternative such as Morse code,” Bernstein says. “It is an interesting alternative to our overly high-tech world.”

Club member Robb Zarges, 54, a radio operator from Massachusetts who goes by the call sign K2MZ, leads the classes. Because the Long Island CW Club has always operated primarily on Zoom, it includes 761 members from 50 states and 15 countries.

Zarges started teaching an adult beginner class in January. When the coronavirus hit, he had an epiphany. “I said, ‘We’ve got all these kids stuck at home. Let’s teach them some Morse code.’ I really thought it was going to be a handful of kids of club members. We ended up with 75 kids who signed up.”

Classes meet three to five days a week for 30 minutes to an hour, depending on the age group. Kids are split into kindergarten to third grade, fourth and fifth grade, and sixth through 12th grade, says Zarges, who volunteers his time. Students can download a free app called Morse Typer that allows them to make the dot and dash sounds if they don’t have Morse Code equipment.

The club is on its third round of beginner classes for kids and has added an intermediate level. The next round of classes will likely begin after Labor Day. “It’s been pretty fun,” Zarges says. “The kids are so eager and having such a great time.”

OTHER WAYS TO LEARN

Bob Inderbitzen, a spokesperson for ARRL, the national association for amateur radio based in Newington, Conn., says he couldn’t think of any other organizations offering formalized online Morse code classes for children, although many radio clubs will introduce children to the old-fashioned communications tool in schools or at maker fairs and events. “It’s very common for radio clubs to use Morse code as a way to encourage young people to explore radio,” Inderbitzen says.

Boy Scouts and Girl Scouts also introduce children to the code. The Boy Scouts’ Signs, Signals and Code merit badge asks Scouts to send and receive a message of six to 10 words, for instance, and the Emergency Preparedness badge depicts the code for H-E-L-P on the badge itself. Boy Scouts can also earn the right to wear an interpreter strip for Morse code on their uniform by meeting requirements such as carrying on a five-minute conversation in Morse code at a speed of at least five words per minute. The interpreter strip spells out "Morse" in Morse code.

The Girl Scout Junior Detective Badge teaches the history of Morse code, says Denise Ingenito, chief community impact officer for the Girl Scouts of Nassau County. The girls use sheets with Morse code characters to practice spelling out their names.

For more information on the programs, visit longislandcwclub.org. While the children’s classes are free, adults pay $30 for a one-year membership or $90 for a lifetime membership and then can take classes, Bernstein says.