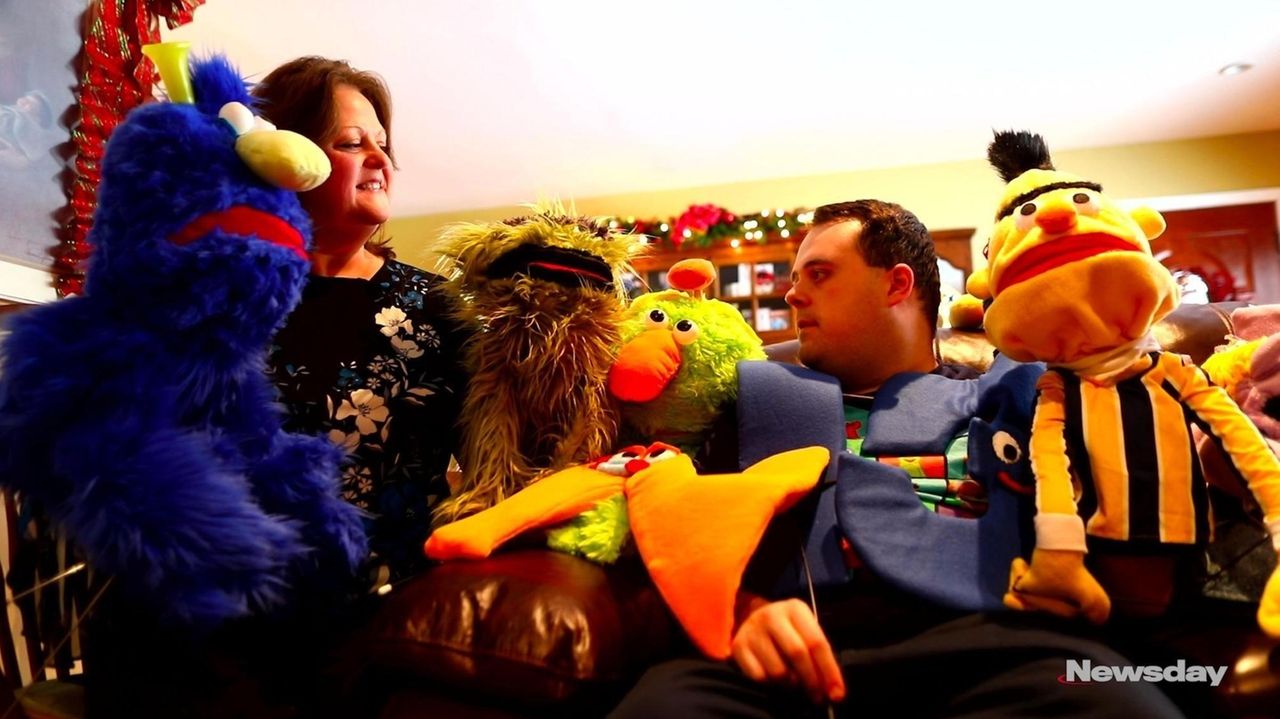 On Thursday, Carol Ceffalia, mother of Bill Ceffalia, talks about how the art of puppet making has been a therapeutic outlet for her son who has autism.  Credit: Newsday / Chris Ware

“This house is too clean. It makes me sick,” Bill Ceffalia growls.

Ceffalia is insulting his mother, but she’s not offended. Ceffalia, 25, is talking as the voice of a puppet — the furry green Oscar the Grouch, who everybody knows favors his "Sesame Street" trash can over a spick-and-span ranch in East Northport. Oscar is one of 42 Muppet replicas Ceffalia has created over the past two years.

“ … Mr. Johnson. Letter B. Rosita. Little Bird. Oscar the Grouch. Elmo …” he reels them off in the order he’s made them.

Like the "Sesame Street" character Julia, Ceffalia has autism. One of his idols is Caroll Spinney, the voice of Oscar and Big Bird. After Spinney died on Dec. 8, Ceffalia was so crushed he wrote a letter he plans to send to the Spinney family to express his condolences. Ceffalia’s dream would be to take over as the six-foot-tall Big Bird — one puppet he has yet to make. “We’re scared of that one because he’s big and there’s lots and lots of feathers,” jokes Ceffalia’s mom, Carol, 54, who works insurance claims.

A friend mentioned Judy Jones, owner of Sew Fun! in Northport. “All of a sudden, this woman fell out of the sky,” Carol says. “She said she never did anything like that before but was willing to work with him and see what they could do.”

Not only does Ceffalia create the puppets, he brings them to life.

“Every time he’s watching 'Sesame Street' he’s studying,” says Michael Carbuccia, Bill’s life skills coach. “He’s getting every single detail about the voices, the mannerisms, their back story — and that’s all in his head.”

When Carbuccia first starting working with Ceffalia a few months ago, “I was blown away,” he says. “I had heard he made puppets and I thought, ‘Oh, that’s a nice arts and crafts activity.’” Then he saw the puppets in person.

LEARNING AT ANY AGE

“Sesame Street” offers Ceffalia a coping mechanism when struggling with challenges such as overstimulation, Carbuccia says. When Carbuccia took Ceffalia to Rise of the Jack-o’-lanterns in Old Westbury during Halloween season, it was dark, there was scary music, Carbuccia says. “I heard him re-enacting one of the lessons he learned on 'Sesame Street' about how it’s OK to be scared of the dark.”

At the private Sewing Class Ceffalia attends for two hours twice a week, Jones guides Ceffalia step by step as he sews by hand or on a sewing machine. Materials for each puppet cost about $30, Carol Ceffalia says; sewing sessions are $50 each. Making a character can take six or more sessions. Ceffalia is currently working on Herry Monster; next up is Prairie Dawn.

“I love the voices that Bill does as his puppets. He makes me laugh all the time,” Jones says. “This is Bill’s element.”

In the Ceffalia home, one room is given over to the characters. Bill has also made props — Oscar the Grouch’s silver garbage can, a bowl of stuffed cookies for Cookie Monster. He’s drawn scenery on bedsheets hanging on the walls. He makes videos; Carol tapes them. “The house will be filled at some point,” Carol says. “But it makes him really happy."