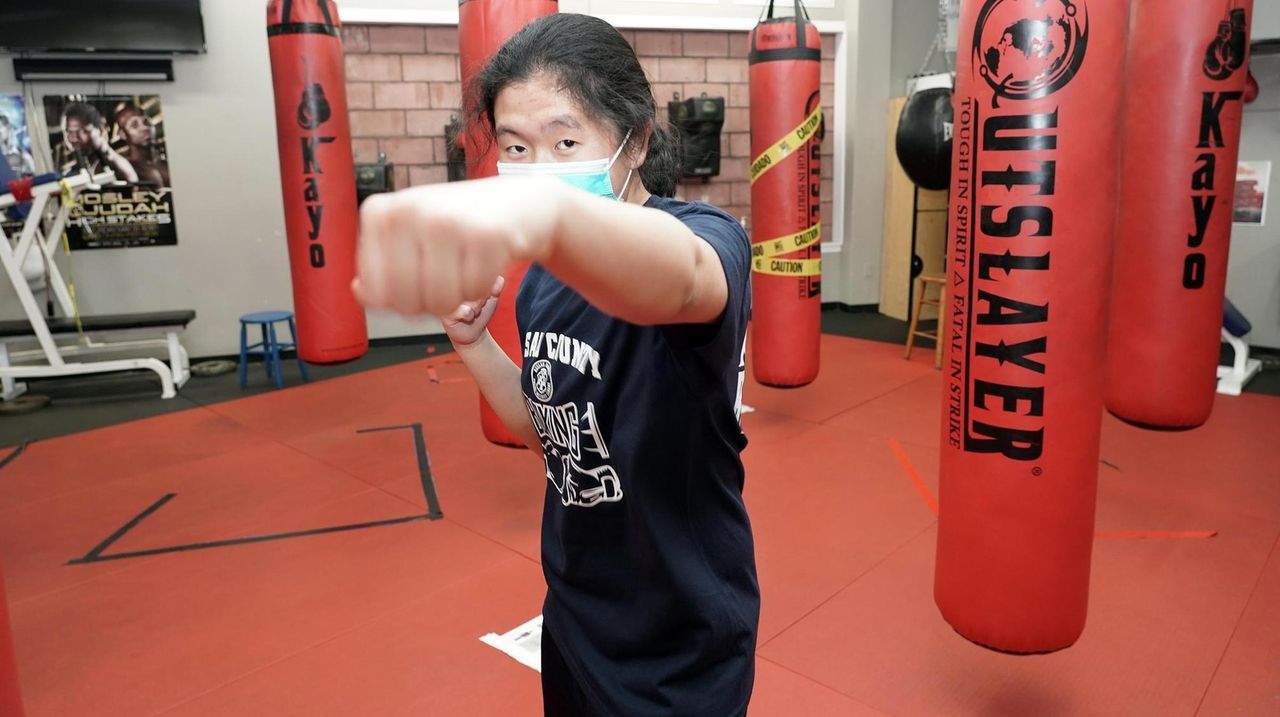 After a 15-year hiatus, the Nassau County PAL decided to offer boxing to tweens and teens again at Kayo Boxing in West Hempstead. The spring program is currently full but there is a waiting list in case more sessions are able to open.

When the Nassau County Police Athletic League decided to offer boxing to tweens and teens again after a 15-year hiatus, the classes filled up faster than a one-two punch.

The plan was to start in April with two sessions on Saturdays, but the response was so overwhelming that two more sessions were immediately added, says Nassau Police Officer Christopher Innace, one of the directors of Nassau’s PAL. After those filled, there was still enough interest to add four more weekend sessions.

Now there are eight 45-minute sessions on Saturdays and Sundays with 68 children in all, with 20 additional children on a waiting list, Innace says. Groups are divided by age, 8 to 12 and 13 to 18, in coed classes limited to 10 students each. Each class will run for eight consecutive weeks and cost $160 per child; boxing gloves and other equipment is included.

The sessions will be noncontact — children won’t be boxing each other, Innace says. "This is more of a physical fitness, get in shape type of program," he says. Kids will learn form in the ring and will punch heavy and small bags to learn combinations and techniques.

"I was surprised that we were able to add all these sessions so fast," Innace says. "This is something new, something different." Parents say they signed their children up for a variety of reasons: to give them a workout, to teach them self-defense, to help them relieve stress, to help return to normal after a year of pandemic isolation.

The support for a boxing program isn’t surprising to Suffolk County Police Officer Edward Groce, a coordinator of the Suffolk County PAL — Suffolk has been running its boxing program for kids for more than 40 years, offering a less formal, drop-in training five days a week at the Brentwood Recreation Center to a roster of 300 children who pay $50 a year; some of those kids have eventually gone on to compete in the ring. The Suffolk program is currently on pause due to the pandemic, Groce says.

"Boxing does a multitude of things," Groce says. "It takes your energy and level of aggression out in a productive manner." Kids also idolize boxers just like they do other sports figures and want to emulate them, Groce says.

"I’m thinking it’s going to be exciting because I really like boxing. I watch boxing sometimes on the TV," says Marc Santamaria, 10, of Valley Stream, whose parents signed him up for the Nassau program.

Christopher Tomeo, 15, of Lynbrook says his maternal grandfather was almost a professional boxer when he was younger. "He was teaching me here and there," says Christopher, who is looking forward to formal training.

"It’s going to be a great cardio workout, a great body toning workout and a great stress release," says Michael Corleone, owner of Kayo Boxing, where the sessions will take place.

The children will learn to shadowbox. "Shadowboxing is like punching the air. It is something every boxer does all over the world since the beginning of time. You get to practice how you would throw your combinations without the punishment of getting punched back," Corleone says.

The kids will also punch a heavy bag — a great way to alleviate aggression and stress, Corleone says. They’ll use a smaller speed bag, which focuses on eye-hand coordination and works out the triceps and biceps, Corleone says.

The sessions will be supervised by PAL police officers, which helps create a bond and trust between students and the force, says Nassau Commissioner of Police Patrick Ryder, who approved the reinstitution of the program.

Tricia Alwaise-Kiernan, 50, a teacher’s aide from Seaford, signed up her son, Patrick, 14. "I really want him to learn self-defense. I just want him to be able to take care of himself, not hurt anybody."

The program was initially supposed to begin in 2020, but due to the pandemic, it was postponed. Manuel Santamaria, Marc’s father, says Marc was signed up last year, and he and his wife, Teresa, signed him up again this year as soon as they heard the program was on again. Manuel, 54, a project manager for a construction company, says they like the fact that it’s noncontact, and that Marc may have a chance to take off the few pounds he has gained being remote and without organized sports for months during the pandemic.

"It’s not like I want to put him at 10 years old in the ring fighting with another kid," Manuel says. "We’re just parents who want our kids to be active instead of sitting in the house doing nothing. I think everybody is just trying to get out of the house and do activities."

Nassau County PAL offers classes at Kayo Boxing, 456 Hempstead Tpke., West Hempstead. Students attend a 45-minute class one day a week for eight consecutive weeks at a cost of $160 per child. The spring program is currently full but there is a waiting list in case more sessions are able to open; 516-573-2250, nassaucountypal.org.

Suffolk County PAL offers classes at the Brentwood Recreation Center, 99 Third Ave., Brentwood. Drop-in training for ages 8 to 18 is offered five days a week for a $50 per year fee. The program is on pause due to the pandemic. 631-852-6107, Cipalsports.org.

Other venues offering boxing for kids:

Slick Sluggers Boxing, 460 Jericho Tpke., Mineola, offers a youth program for ages 11 to 16, with classes from 5:30 to 6:15 p.m. Mondays through Thursdays. Membership fees run $207 per month for a three-month commitment, $177 per month for six months and $147 per year. Membership entitles a child to three classes per week. Classes are noncontact. Students do bag work and focus on form and technique, says owner Nic Gialourakis; 516-493-9889, slicksluggersboxing.com.