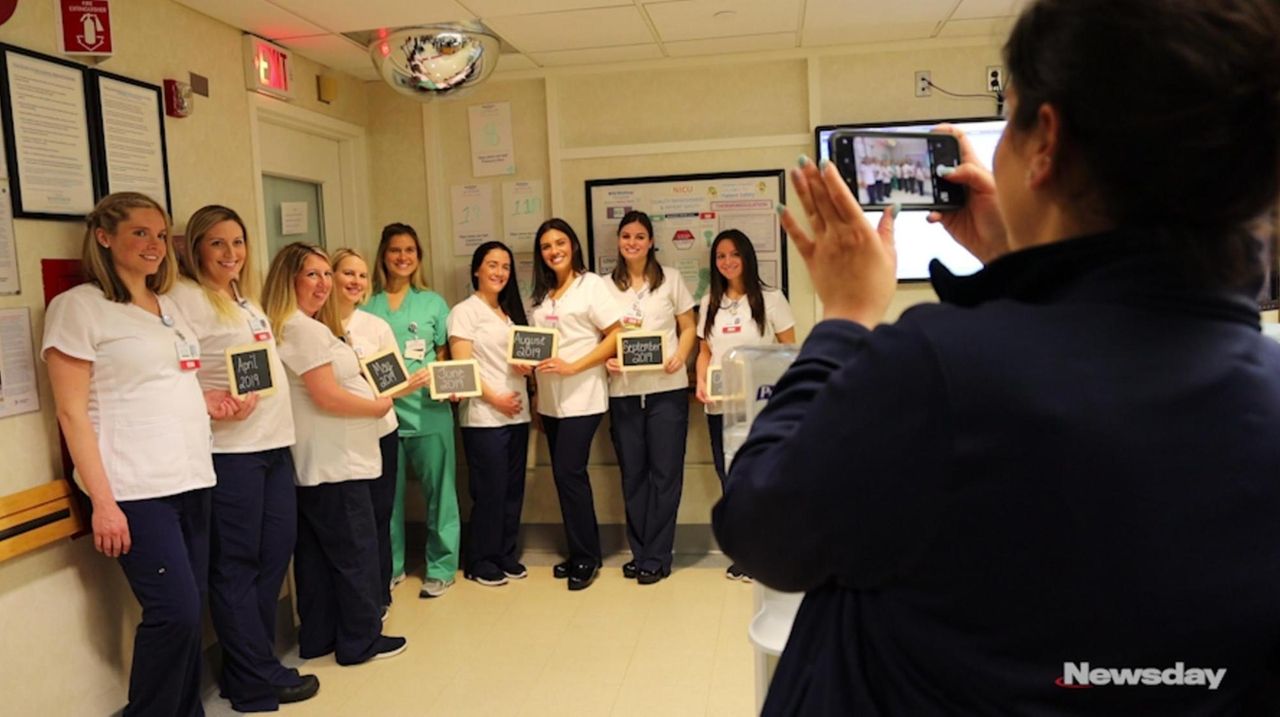 Eight nurses and a physician assistant who work in the Neonatal Intensive Care Unit at NYU Winthrop Hospital in Mineola, are due to give birth between now and October. On Tuesday, Sara Chewens, the seventh neonatal employee to come forward with her pregnancy, explained how the expecting mothers are able to give each other advice on their pregnancies. Credit: Newsday / Alejandra Villa Loarca

It seems pregnancy is contagious among the mother-and-newborn-care staff at NYU Winthrop Hospital in Mineola — 15 women in the labor and delivery unit and the adjacent neonatal intensive care unit are due to give birth between now and October.

“We should make an announcement: ‘Anybody else? Come forward now,’ ” joked Katelyn O’Connor, 31, a physician assistant from Stamford, Conn., who is due to have a boy on June 6.

In the neonatal intensive care unit for premature or sick babies, eight nurses and a physician assistant are pregnant, and all the women except one are expecting their first child. In the labor and delivery unit, six staff members are pregnant on the heels of seven other colleagues who have given birth since the fall.

C.J. Catalano, nurse manager of labor and delivery, has been in her position for 18 years, and she said she’s never seen a baby boom like this one. “That is unusual. I can’t explain it,” agreed Dr. Nazeeh Hanna, chief of the neonatology department, also known as the NICU.

A similar story about nine staff members pregnant at the same time in a labor and delivery unit at a hospital in Maine went viral recently on the internet, and O’Connor said at least three people sent it to her because she works with babies. “I say, ‘Come down to the NICU. We’re living that right now,’ ” she said. “I think the funniest reaction is from our co-workers who don’t want to get pregnant. They say, ‘Stay away, don’t come near me.’ ”

LaShon Pitter, nurse manager for the neonatal intensive care unit, which uses about 120 nurses to care for up to 27 babies around the clock, said she’s not shocked that the baby boom happened because seven of the nine pregnant women in the NICU got married in the past two years.

Sara Chewens, 33, of Glendale, Queens, was the seventh NICU employee to come forward with her pregnancy — she’s due on Aug. 23. “I took a long time to tell everyone, because I was in denial,” she said. She said she couldn’t believe she was expecting, too. She was trying, though, she admitted. Seeing everyone else pregnant gave her baby fever.

Katherine Kent, 35, of Massapequa Park, is a labor and delivery scrub nurse who helps with C-section deliveries and is due with her second child on June 23. “It’s been amazing. It’s the best unit to be pregnant in. We deal with pregnant women every day,” Kent said.

Working in the NICU can be sobering because the nurses see what can go wrong. “This job lets you know more than you should, the possibility of the sad stuff,” Chewens said. But she focuses on the excitement and joy, she said.

The NICU nurses often turn to Amy Florio, 39, of Franklin Square for advice — she’s the only one of their group expecting a second baby, a girl due on May 3. Her daughter Hailey is 2. She’s a live version of “What to Expect When You’re Expecting” for her co-workers — she’s been asked everything from which stroller to buy to details about banking babies’ cord blood, which she did with her first, she said.

Heather Beebe, 28, of Floral Park, was the first NICU nurse to get pregnant — she’s due April 17. “I knew it was possible there would be others following me,” she said. “It’s definitely a cool experience sharing it with them.”

What LI hospitals offer expecting parentsWhen it comes to having a baby on Long Island, many parents-to-be have questions about where to deliver their little one. See what LI parents are naming their kidsMichael was the most popular male name and Isabella was the most popular female name among 230,557 children born on Long Island between 2007 and 2016. LI kids' unique names and the stories behind themSome parents name their children in honor of a loved one, while others take a different approach.