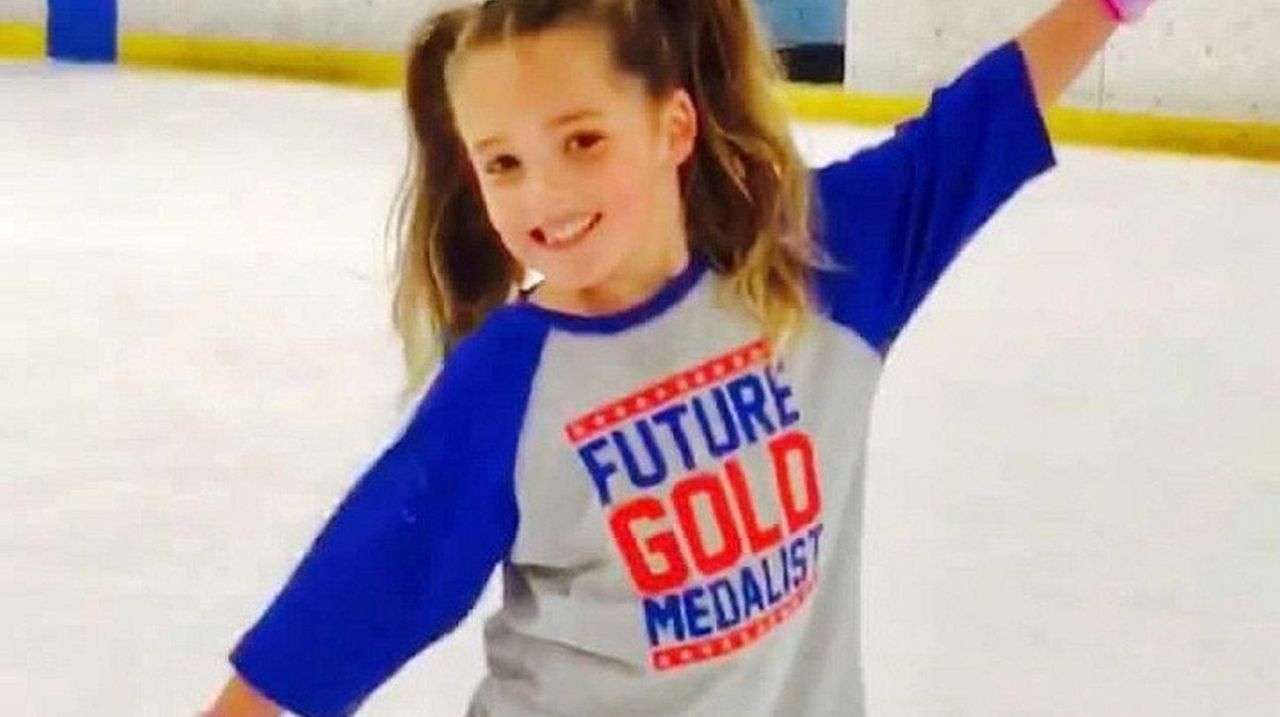 Madison Lada, 6, of Garden City, on Feb. 15, 2018, talks about her love of figure skating, as she is accompanied by one of her coaches, Shannon Lenihan of Great Neck, and Samantha Esposito, skating school director at Iceland in New Hyde Park, one of the rinks where Madison skates. Credit: Newsday / Beth Whitehouse

Six-year-old Madison Lada of Garden City watched Mirai Nagasu become the first American skater to accomplish a triple axel — and dreamed of a day when she, too, might be an Olympic figure skating star.

The kindergartner has been ice skating since she was 3 years old, and skates four days a week at Long Island ice rinks with private coach Tara Modlin, who right now is at the Olympics in South Korea with adult competitors.

Madison competes with a 2-minute routine choreographed to the “My Little Pony” song “Time To Be Awesome.” And to be awesome is her goal. “You get to glide around,” Madison says of skating. Her favorite move is a waltz jump. “It’s very fun to be in the air for a long time.”

Has she ever fallen?

Madison is one of the many kids on Long Island who are working hard to perfect their skating skills — even more so as they watch Olympic skaters win medals for their achievements, says Samantha Esposito, skating school director at Iceland in New Hyde Park, one of the rinks where Madison skates.

“There are so many young girls who skate every day who work hard and skate their hearts out before and after school. You can see how much harder they are working because they want something like that,” Esposito says.

“Madison is this little bubble of energy,” says her secondary coach, Shannon Lenihan of Great Neck, who steps in when Modlin is away. “She skates with pigtails, she skates against 13-year olds and goes out and wins. She spins, she jumps, she does a lot of things that most people her age don’t do.”

Madison’s mom, Cathleen Curran, says she doesn’t know where her daughter’s passion for the sport came from. “I can’t skate at all,” Curran says. “She kept wanting to go ice skating. I don’t know where she saw it.”

Curran signed Madison up for group lessons on her third birthday. On the first day of class, while the rest of the group was playing with toys on the ice, Madison used a rink walker and skated across the rink, her mom says.

Modlin, who was the instructor that day, approached Curran, and Curran thought Madison was probably going to be in trouble because she didn’t stay with the group. Instead, Modlin told Curran what Madison had said: “She told me she wasn’t here to play, she was here to learn to skate.” Soon, Curran had Madison taking private lessons.

“This is my sixth Olympics,” says Modlin in a phone interview from overseas. “I know what it takes, and hard work is the No. 1 ingredient.” Madison has that going for her, Modlin says.

Working toward winning competitions is a commitment for the parents as well as the child. Curran has to drive Madison to her lessons and has to pay for them. “And it’s cold,” Curran says. “Even in the summer, I’m cold.”

14 trends every LI parent needs to know in 2018Take a look at the potential parenting trend forecast that may capture your attention in 2018. 11 perks for kids at LI restaurantsDining destinations offering something fun for kids. 16 birthday freebies for kids, adults on LIFrom burgers to balloons, birthday freebies are abound at many LI venues.