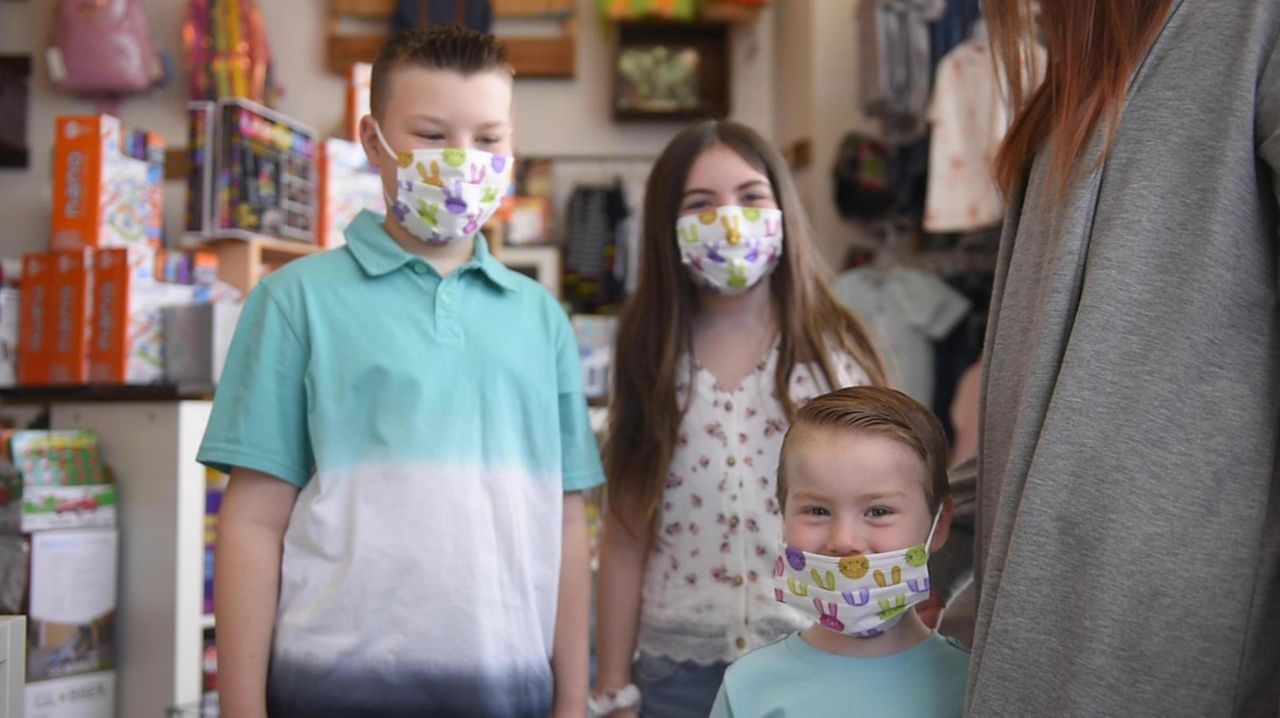 Erica Risciglione, of West Islip, on Wednesday went with her husband and children, Jaxon, Joon and Landon to Bubble Boutique & Learning Center in Babylon to go shopping for Landon's 4th birthday. Risciglione talked about the difference between her kids' birthdays during the height of the pandemic in 2020 as compared to today. Credit: Johnny Milano

Sacrificing a birthday party once during the pandemic was disappointing enough. But for kids whose birthdays fall in March, April, May, and perhaps beyond, this is their second year that singing "Happy Birthday" may have to be a muted affair.

Parents are coming up with creative ways to mark the special days, taking advantage of the growing optimism surrounding vaccinations and improving weather conditions to plan parties outdoors, at restaurants and at party venues that have now been allowed to reopen.

Kelly and Henry Urbano of Massapequa Park, for instance, say it was heartbreaking when they canceled their daughter Camila’s first birthday party last March. "It was our first child, her first birthday," Kelly says. The milestone was supposed to be feted with a visit from "Frozen" characters Anna and Elsa.

This March, when Camila turned 2, however, the Urbanos were thrilled that for $100 they got a permit from the Town of Oyster Bay to accommodate a party for 15 adults and 10 children at Brady Park in Massapequa. They had a fish piñata and a cake by the lake; the children played on the park playground.

"We just pulled off such a really, really nice event," says Kelly, 33, a director of business development for a production company. "I finally got to throw my child a birthday party."

Other families have found ways to move beyond the car parades and Zoom gatherings that marked so many birthdays last time around.

When Julianna Farrell of Bay Shore turned 7 this March, her parents planned an extended family get-together with her aunt and uncles and her older sister. "She wanted to wear a dress; we put make-up on her so she felt special," says Lorraine Ellis, 32, a stay-at-home mother. They bought Julianna a Baby Yoda ice-cream cake and served tacos, her favorite dinner.

"We looked into having a party, but a lot of her friends didn’t really feel comfortable doing it yet, so we chose not to. We’re hoping next year it will be a lot better," Ellis says. Then maybe Julianna can have the Chuck E. Cheese party that was canceled in 2020.

Emily Mooney of Islip celebrated her 13th birthday in March by going for lunch in an igloo with three friends at Maxwell’s on Main Street, says her mother, Tara, 47, a custodian. Her son Conner’s 16th birthday is in April and they are still deciding what to do for him. "He’s happy at least this year he can see his friends. Last year he couldn’t," Mooney says.

Ava Lerner, 16, of East Northport, didn’t get to celebrate her Sweet 16 in a big way during 2020, but the family plans to mark her milestone in 2021 with a trip instead with her best friend, who is turning 16 in August, says mom Lori, 45 an account clerk. Disney is one option on the table.

Landon Risciglione, 3, of West Islip, has a smaller wish for his 4th birthday in April, says Erica Risciglione, 36, a stay-at-home mother from West Islip, and Risciglione is happy she now feels like she can grant it. "He desperately wants to go to the toy store and pick something out," she says. "I feel comfortable taking him places now."

HEADING BACK TO ‘NORMAL’

Some families are venturing back to play places for outings or birthday parties.

Summer Simon, 44, a photographer from Port Jefferson Station, took her daughter, Emma, and one of Emma’s friends to the indoor DreamWorks Water Park at the American Dream mall in New Jersey in early April to celebrate Emma’s 14th birthday.

Last year, they had a Zoom party. "It was definitely not the kind of birthday you want when you’re turning 13 years old," Simon says. This year, "She said ‘this birthday was so fun.’ I was happy to hear that. It was nice to get out and do something fun."

Kristin Ho, 36, a hospital credential coordinator from Flushing, had her son’s 7th birthday at Pump It Up of Great Neck one recent Saturday. Her group was alone in each bounce room, which was cleaned before and after they used it. "I was concerned I wouldn’t get enough of a turnout," she says, but a dozen children attended.

Crissy Ciaccio, 33, of Smithtown, a gymnastics coach, says her son Daniel, who will turn 9 in April, is hosting four friends along with his siblings and a cousin at a party at Urban Air in Lake Grove, which was able to reopen at 25% capacity last month.

"Last year it wasn’t the worst, because I had a birthday parade, but it wasn’t like a regular birthday party, and I didn’t get to see my friends," Daniel says. "I feel much better this year, of course."

Before Ciaccio even told Daniel about the plan, she contacted the other parents to gauge their comfort level. "Shockingly, they were all for it," she says. Ciaccio says being able to plan the party is a relief. "It’s like, ‘OK, maybe things are starting to go a little bit back to normal.’"