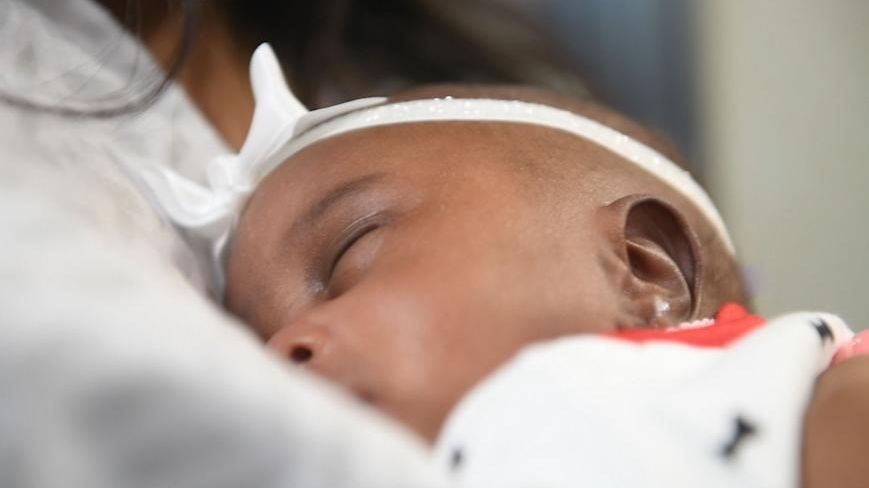 On hand to celebrate World Prematurity Day at Good Samaritan Hospital in West Islip on Friday Nov. 17, 2017, were babies Alijah McLeod and Oscar Campos, who are home after having spent time in the hospital's neonatal intensive care unit. Credit: Newsday / Alejandra Villa

For more than three months, the Campos and McLeod families hoped and prayed that their newborn babies would leave the neonatal intensive care unit at Good Samaritan Hospital in West Islip.

But on Friday, the families returned — their babies in hand — in celebration of World Prematurity Day, a day established in an effort to raise awareness of preterm birth.

In 2016, about one in 10 babies was born too early in the United States, according to the Centers for Disease Control, and the earlier a baby is born, the higher the risk of death or serious disability.

Alijah was born on June 27 and spent 112 days in the hospital. Oscar was born June 2, and his stay lasted 137 days. He remains on oxygen since going home.

Alijah’s mother, Barbara McLeod, 36, of Bay Shore, said her daughter, born at 24 weeks, was “the smallest in the NICU, but the strongest.”

“All the nurses kept saying, ‘She’s just fighting us every day, she’s kicking, she’s hitting!’” she said. “They couldn’t believe how strong she was. She, she had a determination to live.”

Luciana Campos, of Lindenhurst, called her son Oscar “a miracle” and said she feels blessed to have seen him overcome such odds. He has grown from about 1 to 8 pounds since he was born.

“It was a very long journey, with ups and downs,” Luciana Campos said. “But we took one day at a time.”

“You don’t see that many 23-weekers survive,” she said.

Both Campos and McLeod gave birth through emergency C-sections. McLeod, who went into kidney failure one week before delivery, required emergency dialysis until the baby was born.

Alijah has undergone two laser eye surgeries and a hernia repair operation. During her time in the NICU, she was intubated and had several blood transfusions.

“She’s still not out of the woods,” said her mom, noting that doctors said the baby would not be on stable ground until at least age 3.

Alijah is the youngest of five children — “the completion to our family,” as her father, Donavan McLeod, called her. Two of the McLeods’ older children were also born prematurely.

Barbara McLeod said all of her pregnancies have been identified as high-risk since her first, when she was 19.

Luciana Campos has two older children, neither of whom was born prematurely, so Oscar’s early arrival was especially surprising. The newborn was intubated for a month and a half and spent a week under lights.

His brown eyes wide and wet on Friday, Oscar’s father, Juan Campos, said he just could not believe his “miracle baby” is doing well after so much uncertainty.

For Alijah’s father, Alijah is a reminder not to give up on seemingly hopeless situations.

“I literally have a living miracle that lives with me; so, now, you know, what more excuses, if I had any, can I have?” he said.