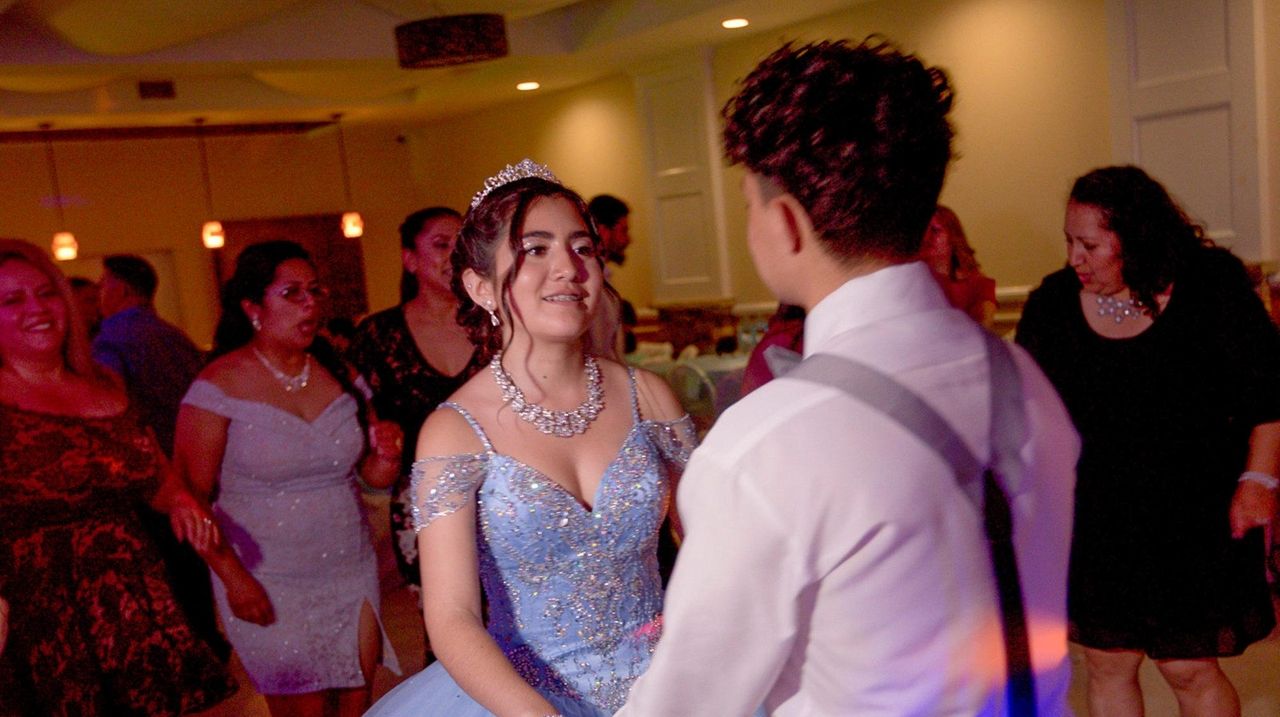 Some families take years to plan a quinceañera, the Latino celebration marking a girl's 15th birthday. Samantha Alvarez of Brentwood celebrated her quinceañera with friends and loved ones at the Masonic Lodge in Smithtown on May 25. Credit: Linda Rosier

Between the Patchogue teenager's classic quinceañera morning Mass at St. Joseph the Worker Roman Catholic Church in East Patchogue and her evening party at a catering hall in Medford, Muy and the friends she had chosen for her “court” had their limousine stop at a Wendy’s so they could enjoy fast food in full party regalia.

That regalia for Muy included a blush-pink ballgown she had scoped out online at Pinterest.com and then tracked down at Estelle’s Dressy Dresses in Farmingdale. And at the party in August, Muy’s father, Eduardo, 40, a construction worker of Ecuadorian heritage, gave a welcome speech in both Spanish and English so all 150 guests would understand.

Fast food pitstops, online dress shopping and speeches in two languages are recent additions to the quinceañera as the Latino celebration of a girl’s 15th birthday evolves with the times. While the quinceañera (pronounced keen-SAY-en-yera; quince is the Spanish word for 15) is said to date to the Aztec Indians in Mexico, it’s still relevant for many families on Long Island, who may plan for a year or more for the coming-of-age rite of passage that can cost tens of thousands of dollars.

A quinceañera traditionally includes a church blessing followed by a party, typically in a catering venue. Girls choose a “court” that includes her escort as well as a number of boy and girl friends, siblings and cousins, sometimes as many as 14, who wear matching formal outfits.

During the party, the father typically changes his daughter’s shoes from flat ones a little girl would wear to high heels to symbolize the transition to a grown woman. Samantha Herrera of Brentwood walked into her quinceañera in March at Jericho Terrace in Mineola wearing Vans sneakers, and her father, Juan, who is Honduran and owns a trucking company, replaced them with a pair of pumps with crystals to match her Cinderella-style champagne-colored dress.

“My dad was really emotional. I thought he was going to cry,” Herrera says. The duo then shared a traditional father-daughter waltz — the Herreras chose the contemporary tune “No Crezcas Mas,” whose lyrics implore, “Please don't grow anymore.” The party also may include other traditions, from mom placing a crown on her daughter’s head to the girl being presented with a symbolic “last doll” of her childhood to a “surprise dance” made up of three or four numbers performed by the court.

The surprise dance involves multiple practices leading up to the quinceañera. “On weekends I have to focus on everyone getting to my house for practice,” said Samantha Alvarez, 15, of Brentwood in an interview before her May 25 quinceañera, which took place at the Masonic Lodge in Smithtown. "Everything went well," she says, adding that the event "marked a new chapter in my life. I think five years from now we will be looking back at the pictures and looking back at the videos and all the memories we made that day."

Like with bar and bat mitzvahs and Sweet 16s, families may hire party planners to help with the theme and decorations, a choreographer to plan and supervise the surprise dance, a D.J., emcee, photographer, videographer, and makeup and hair stylists. Dresses can cost hundreds of dollars. The entire cost can range from $10,000 to $40,000 or more, says Aura Gonzalez, a Long Island party planner and choreographer.

Ileana Perez-Castillo, 57, a school district neighborhood aide from Jericho, gave both her daughters — Olivia is 16 and Natalia Rosa is 14 — the choice of a quinceañera or a Sweet 16 and says she was thrilled when both chose a quinceañera to honor the family’s Puerto Rican heritage.

“It helps me feel closer with my culture and my family,” says Natalia Rosa of her decision. She chose a theme of roses for her quinceañera, because her middle name means rose in Spanish. She selected a scarlet ballgown with silver roses for the event, which is happening at Prime in Huntington in September. Her older sister’s quinceañera was last year at Crest Hollow Country Club in Woodbury.

Ericka Uribe Carey, 50, who works at the Patchogue-Medford Library, had a quinceañera many years ago in Mexico. “I remember my dad, he just shared that it was a treasure for him to have a daughter. He wanted society to see me as a person who needed to be respected and treated with love and care, like a beautiful flower.” But some girls choose a trip abroad or even a car instead of a quinceañera — Carey’s own daughter, who is 12, for instance, wants to travel to Paris instead of having a party.

Muy says she is happy she had the traditional celebration. “I was really scared for the entrance part,” Muy says. But she needn’t have been. “When I walked in everything was so nice. Everyone was clapping and cheering. I would say that was one of the best moments of my life. Everyone there to celebrate a day that’s for me, to celebrate my birthday.”

50 best places for families on LIFind out where LI parents love to take their kids. 18 historic LI places kids will loveStep into the past, make crafts, explore nature and more. Big thrills on LI: 15 unique things to doTackle the tallest water slide, try the largest slice of pizza and even see a 900-pound pig.