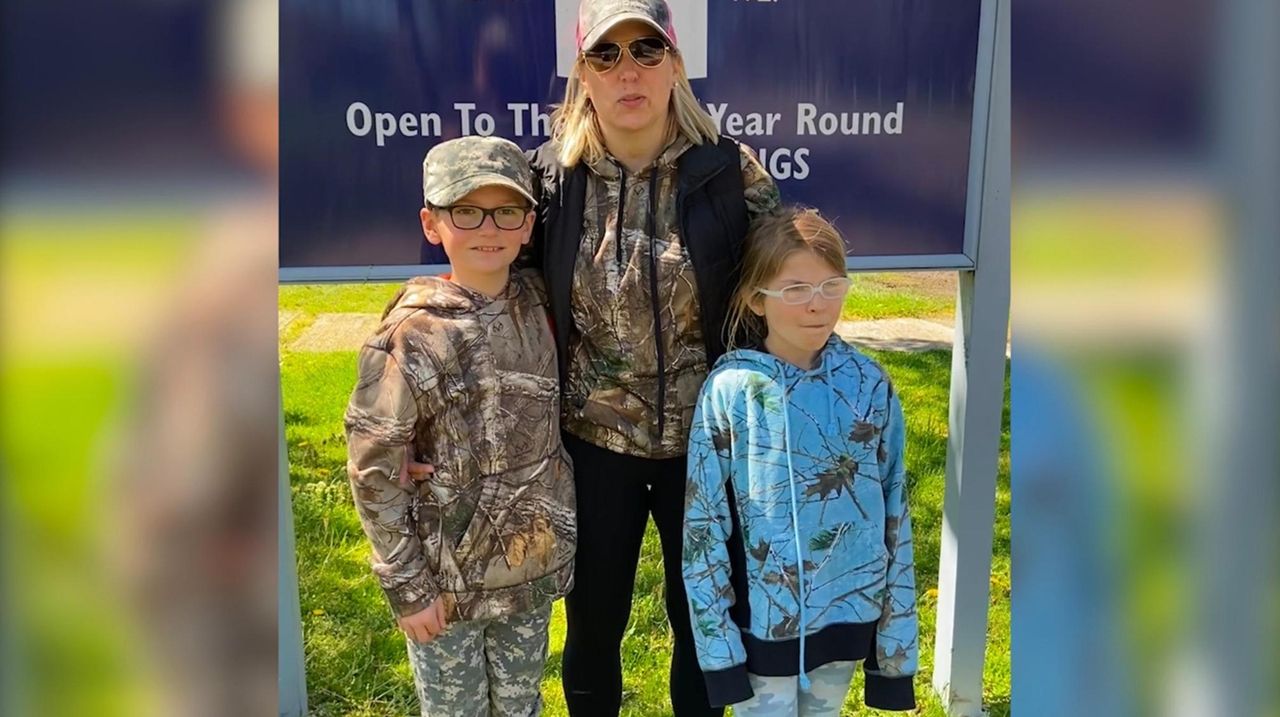 Nicci Fitzgerald, a realtor from Cutchogue, created the "Covid Chase" scavenger hunt on the East End. More than 70 families, including the Boyds: mom Lisa, and twins Hannah and Alexander, 9, participated on May 2.  Credit: Nicci Fitzgerald and Lisa Boyd

Twins Hannah and Alexander Boyd, 9, faced each other in front of the Long Island Aquarium in Riverhead and had a quick chat — in dolphin language.

As they made-up funny squeaks, their mom, Lisa, 47, aka “QuaranTeam Boyd” manager, videotaped them on her smartphone and then marked 30 points on the team’s score sheet. The Cutchogue family, which included dad Mike, 48, was one of 74 that entered the “Covid Chase” scavenger hunt one recent Saturday.

The hunt sent them by car to East End locations to earn points: Hannah ran up the outdoor stairs of the Horton Point Lighthouse in Southold to the theme song from “Rocky” (that sound effect earned them 10 bonus points) and at the Supreme Court building in Riverhead, they had to Google the year Riverhead gained its separation from the town of Southold (Answer? 1792).

Scavenger hunts have become the entertainment of the moment during the coronavirus lockdown. These are not the old-fashioned find-a-green-straw, locate-a-1955 -penny, put-everything-in-a- paper-bag-and-hand-it-in kind of scavenger hunt. These hunts have participants visiting outdoor locations to take selfies or to accomplish goofy or educational tasks that they document on their phones.

‘Something to look forward to’

The "Covid Chase" was put together by Cutchogue resident Nicci Fitzgerald as a fundraiser to benefit two local East End charities — each team paid $25 to enter. A recent scavenger hunt promoted by a group called Babylon Village Strong supported local Babylon businesses — more than 100 teams paid $10 each to enter and the organizer used that money to buy gift cards from storefront shops as prizes. Colored Colors, a Long Island-based group that fosters relationships between artists and the community, ran a completely digital, virtual scavenger hunt called “Long Island’s Great Art Find” on May 9 in which participants stayed home on their smartphones. Partial photos of Long Island landmarks were sent to them electronically, and the first three players to identify each landmark won paint-and-sip style paintings by local artists donated by Pinot’s Palette in Bay Shore. Colored Colors plans to run another such hunt on May 23, says founder Jose Tutiven.

Other scavenger hunts have been created by parents to entertain just their own children. Some have sprouted online encouraging people to put teddy bears in their windows or paint rainbows that families can look out for while taking local walks. Other hunts that can be done anytime include lists of items to find in the yard (like birds, and colored items).

“They have become a trend because people are looking for something to look forward to and something to do without putting anybody in an unsafe situation,” says Fitzgerald, 44, a realtor who says she spent more than 50 hours creating the items on the "Covid Chase," which ran from 10 a.m. to 5 p.m. on May 2.

Jennifer Parendo, 40, a stay-at-home mom, created the Babylon Village hunt, which was shorter, taking about 30 minutes to complete. “It was a really fun way to bring the community together,” she says. “I think people are looking to bring some happiness into their homes.”

Maryam Lee, 37, participated in a smaller scavenger hunt in Southampton in April organized by local teacher Victoria Muller to raise money to buy iPads so residents of the local nursing home could communicate with family members. "It was good to get out and help out our community," says Lee, who played with her husband, Daniel, 38, a physical therapy professor, and their children, Donovan, 6, and Vivienne, 4. "We've been inside for so long, just to get in the car and look for fun things, the kids loved it."

The outdoor hunts respect social distancing guidelines — each team in the "Covid Chase" could only be made up of people who are quarantining together, Fitzgerald says. The participants were instructed not to get out of their cars unless it was to take a quick photo or video, and to wait if other families arrived at a spot before them.

For the Babylon Village hunt, families could complete it anytime on April 25 or 26. That way there weren’t as many people at the same place at the same time, says Susan Kenny, 46, a teacher who lives in Babylon Village and did the hunt with her whole family — husband Thomas, 45, also an educator, and children Grace, 16, Emily, 15, Tommy, 9, and Jameson, 6.

Emily’s favorite stop was Babylon High School, where competitors had to take a family selfie in front. Emily hasn’t been to school since March. “I got to see it again,” she says.

“We had a blast,” says Mike Malkush, 68, a retired schoolteacher from Cutchogue who did the "Covid Chase" with his twin grandsons, Jacob and Tyler, 11, who live in the same house with him. “We didn’t take the approach that we’re going to go crazy and win it. We said, ‘Let’s just have fun.’ I went to some place that I didn’t even know existed, and I live out here.” One of the stops gave teams 100 points if they dropped off nonperishable food for a local food pantry. “That was ingenious,” Malkush says.

Fitzgerald says she tried to bring awareness to different locations on the East End that players might not know about, such as Spirits Promise Equine Rescue in Riverhead and Einstein Square in Southold, named for the genius who is said to have summered at least once on the East End. She also included points for getting contactless takeout for lunch or dinner from restaurants on the list.

Emerson Fritscher, 8, who did the "Covid Chase" with his mom, Michelle, 44, a high school teacher from Mattituck, says his favorite stop was the Carousel in Greenport’s Mitchell Park. “Mom had to act like a kid and pretend to ride. It was so funny,” he says.

While some hunts have prizes, the "Covid Chase" had a winner but no tangible reward. “There’s no true prize other than bragging rights,” Fitzgerald says. “It kind of becomes a virtual scrapbook for them, too.”

Lisa Boyd agrees that the memory of the scavenger hunt will endure. “This will certainly be something we will look back on fondly in years to come,” she says.

Ready to hunt? Try this scavenger hunt on a walk or drive with the family. Check off the items when spotted and try to find all 15:

- Rainbow in a window