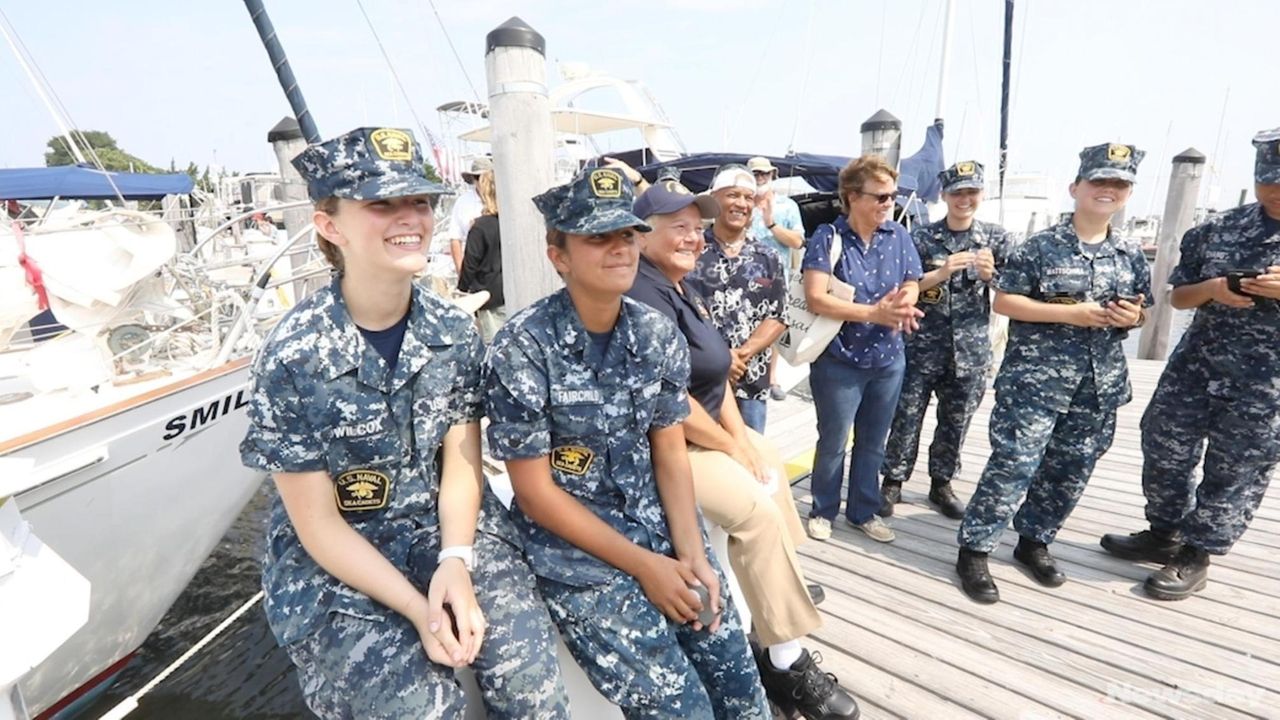 A crew of six teenage girls returned to Mount Sinai on Monday after completing an all-female, nine-day East Coast sailing trip to Provincetown, Massachusetts, and back as part of their summer training with the U.S. Naval Sea Cadet Corps. Credit: Marisol Díaz-Gordon

A crew of six teenage girls completed an all-girl, nine-day East Coast sailing trip in Mount Sinai on Monday, after braving seasickness, winds that pushed them backward and navigating in overnight shifts.

Kerry Monaghan of Islip, who turned 17 during the trip run by the U.S. Naval Sea Cadet Corps, called the experience one she’ll remember for the rest of her life. “It’s been amazing to just look out onto the water and not see any land, just blue sky,” Monaghan said in a telephone interview while at sea last week.

At the dock in Mount Sinai on Monday, she added that the trip taught her "You can make as many plans as you want, but you always have to be able to change that plan and come up with a new direction."

Fellow sailor Natalie Puello, 16, of Mastic, wrote a rap tune about the trip, which she performed on the dock on Monday, joking that her rap name is L'il Jib Sheet, after the name of one of the boat's sails. "I never thought I'd see a day, a female trip on a ship going underway," she rapped.

For the past three years, the Sea Cadet teens who set sail from Long Island on the 47-foot boat named Nada were all male. Because the sleeping accommodations on the boat are tight, teen sailors must be the same gender, says Roger Noakes, 60, of South Setauket, who captained the boat; this is the first time he’s taken out an all-girl crew. Noakes runs Sailing Nada Adventures, a nonprofit leadership program that works with the Sea Cadets to use immersion in an ocean voyage as a leadership classroom.

The U.S. Naval Sea Cadet Corps is the U.S. Navy and U.S. Coast Guard’s youth organization that aims to inspire leadership and good citizenship, and the organization funded the bulk of the cost, with each girl contributing $50, says Lt. Robert Garceau, a Sea Cadet representative along on the trip. The girls are Sea Cadets from divisions in East Moriches, West Sayville and Northport. The remaining sailor is from a North Carolina division.

The girls asked for an all-girls trip this year, and on Aug. 18, the crew set sail along with three adults — Noakes and two Sea Cadet representatives, Garceau and Lt. j.g. Nereida Gonzalez of Medford. The plan was for the girls to sail 24 hours a day in rotating shifts along the coast to Maine and then return.

Mother Nature had other ideas.

“The first night was rough because the wind was really hard. The waves were going up and down,” said Abby Fairchild, 16, of Wilmington, North Carolina.

Everybody got seasick, said Olivia Wilcox, 15, of Shoreham, who described running into the head to throw up.

“Quite a bit of water went down below through the hatches,” Noakes said. He gave the girls the option of just sailing in the bay and not going back into open water. “They showed significant determination to decide they were going to go into this again."

Said Fairchild: "We wanted to really have a sailing experience and push through it."

The teens then sailed from Montauk through Rhode Island Sound, Block Island Sound, Buzzards Bay and to Cape Cod in one shot, sailing overnight and sleeping in shifts.

"Sailing overnight was the most interesting thing I've ever done, because you don't know which direction is which," said Wilcox.

"You're responsible for everyone's lives on the boat," said Erika Mattschull, 16, of East Northport. “It’s doing something most kids aren’t able to do or just don’t do."

Echoed Puello: “We’ve learned everything from steering the boat itself to putting up the sails to cooking while we have rough seas.”

The teens stopped on land at the U.S. Coast Guard Station  in Provincetown, Massachusetts, as well as in Woods Hole, Massachusetts, and Martha's Vineyard. They didn't make it to their original destination in Maine, where they were supposed to have a celebratory lobster dinner, due to the weather and winds. The teens said they weren't too disappointed, because none of them like seafood.

The girls overwhelmingly declared their stop at the U.S. Coast Guard Station as their favorite part of the voyage. “They gave us a tour of the base, and that was really interesting,” OIivia Zhang of Islip Terrace, who at 14 was the youngest on the trip. The girls also got to go shopping on shore, she said.

The teens learned about boating — nautical terms, mitigating risk on the water -- but that’s not all, said Noakes and family members present to pick up the girls after they lowered the boat's American flag to officially conclude their voyage.

“They build confidence. They build character,” Noakes said. “Mostly they learn about themselves.”

Family members welcomed the girls home on the dock.

"I knew this was going to be a wonderful training event," said Peter Mattschull, Erika Mattschull's father, who served in the Navy from 1981 to 1990 and is currently an ensign in the Sea Cadet Corps. He said the girls learned to live in tight quarters, acquired leadership skills and realized that Mother Nature is in charge of everything.

Before the trip, "I had a lot of fears, a lot of anxiety," said Donna Albright, who picked up her granddaughter, Abby Fairchild. "I'm very proud of her."