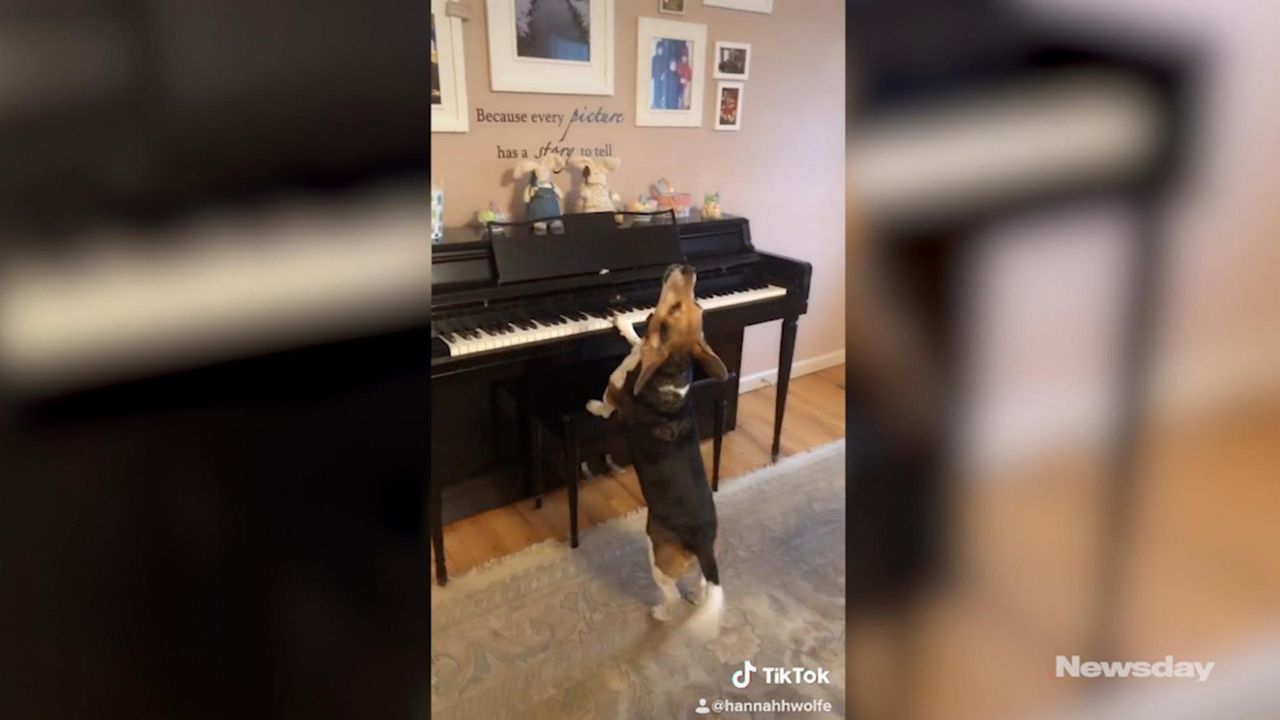 Buddy Mercury, the howling pooch from Lake Ronkonkoma, knows how to entertain by playing the piano and barking to the beat.  Credit: Hannah Wolfe

A video of Buddy Mercury — the piano-playing dog from Lake Ronkonkoma — has gone viral again.

Not only does the pooch play piano, he accompanies himself by singing — um, howling? — the blues.

Two years ago, Buddy’s “pawrents,” as Laurie and Glen Wolfe refer to themselves, posted a YouTube video of their beagle-basset-hound-mix doing its shtick, and that video garnered more than 1.5 million views. And then, when Hannah Wolfe, 15, of North Carolina, was visiting her aunt and uncle on Long Island in April, she took a video of Buddy and posted it on the TikTok app. “That one skyrocketed,” Hannah says.

That new video has indeed soared past 1.6 million likes and gotten more than 15,000 comments. “That’s a robot, look at its tail movement,” wrote one skeptical viewer. “Proof there is an afterlife, probably was Beethoven,” wrote another viewer.  “When that dog went ‘AROOOO’ I felt that,” wrote a third.

“It’s super funny,” Hannah says of seeing Buddy Mercury play — and, yes, he’s named for Freddie Mercury of “Queen.” “We’ll be sitting there eating breakfast and he’ll be doing that.”

Buddy, a rescue dog, plays the piano every day, says Laurie, 37, a wellness manager, and her husband, Glen, 38, a drummer and audio engineer. Sometimes their 22-month-old daughter, Eve, accompanies Buddy. “She loves it. She has a baby piano and they play,” Laurie says. Buddy is self-taught, Laurie jokes. “My husband is a drummer. Music runs in the family.”

The Wolfes have taken things to the next level by taping videos with Buddy wearing a bow tie and creating Buddy Mercury T-shirts and paraphernalia. Buddy’s dream, they say, is to appear on TV with Ellen DeGeneres or Jimmy Fallon. Buddy has his own page at buddymercury.com/pages/behind-the-piano. “We’re just trying to make it fun,” Laurie says. “When we have family and friends over for dinner, sometimes he just jumps up there. He’s a little virtuoso.”

5 unique LI day trips for families Here are a few ideas for thematic day trips guaranteed to please the whole family. LI restaurants offering fun experiences for kidsGo to the carnival, climb aboard a bus or pet a kitty -- all while you eat. 24 new places for kids, parents on LISome of the most recent, family-friendly spots that opened on LI.

1:18
Bay Shore Hobbies provides model projects for all skill levels
The hottest toys of the 2021 holiday season
2:29
Copiague man legally changed his name to Santa Claus
The elves are back! Creative Elf on the Shelf returns
Didn’t find what you were looking for?