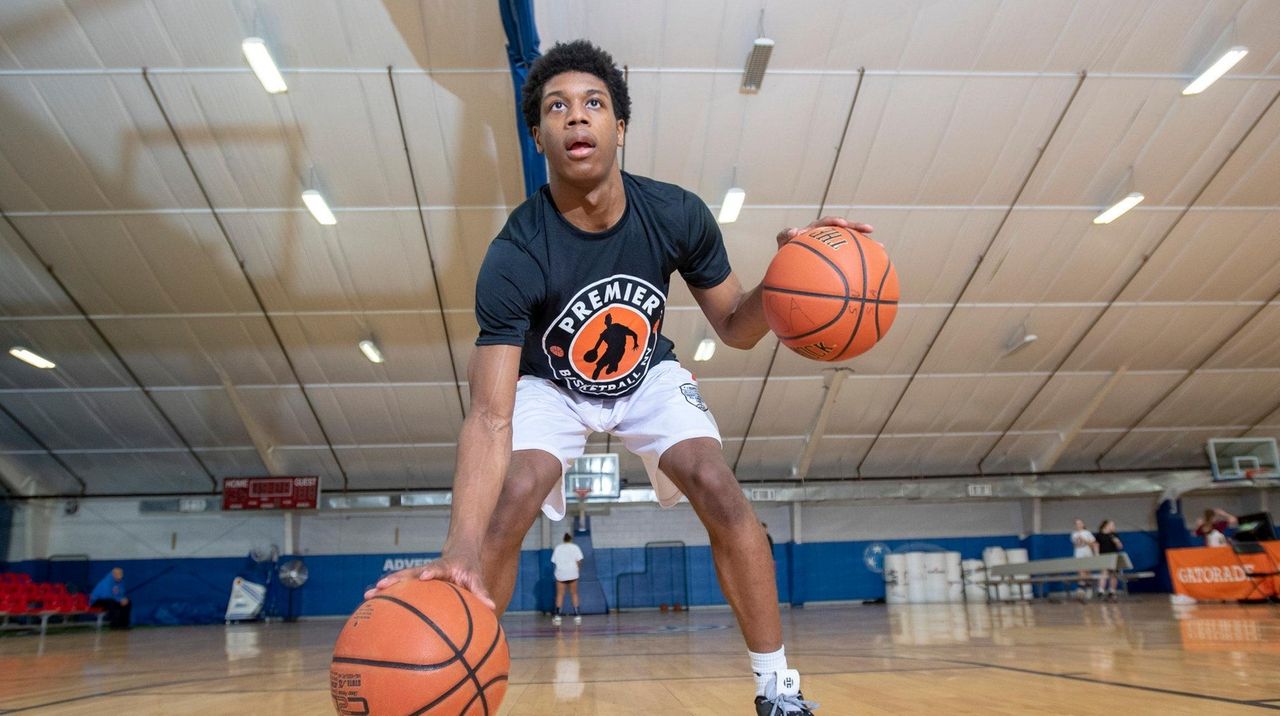 Jordan Riley, a sophomore basketball star at Brentwood High School, talked on May 3 about traveling to games and his hopes to play in the NBA one day. Credit: Howard Simmons

So your child likes soccer. REALLY likes soccer. Or dance. Or robotics. Or cello. It’s great that they have a passion, right? But how far are you willing to take it? Are you ready to invest thousands of dollars a year and give up your weekends for them to participate at a more competitive level?

Nearly two-thirds of parents — 64 percent — are stressed about paying for their child’s competitive activities, according to a recent survey by CompareCards, a division of the Lending Tree financial service company. “It’s something that parents are thinking about and talking about around the country because it’s a lot of money,” says Matt Schulz, chief industry analyst for CompareCards.

Four Long Island families talk about what it costs in time and money to go hard — and what the payoff is for the kids. Not sure you want to go that route? We highlight some less demanding alternatives.

THE TIME COMMITMENT Jordan, a sophomore at Brentwood High School, plays on the varsity basketball team and for the New York Jayhawks, a competitive team sponsored by Adidas. For at least three to four hours daily, Jordan either practices, trains with Premier Basketball N.Y. and Endurance Agility Speed Training in Hauppauge or plays in games. "I don't even keep count. It's a lot of hours. It's fun to play," Jordan says. He frequently travels to locations such as Texas, Alabama, California and Washington, D.C., for tournaments with the Jayhawks. Jordan has three older sisters who help parents Monty, a New York City electrical inspector, and Karen, a librarian assistant, drive Jordan to basketball obligations.

THE FINANCES “It’s been a lot of money,” Monty says. “I’ve taken money out of my 401(k) to buy him a shooting machine, which cost about $8,000.” While Jordan’s expenses to travel with the Jayhawks are paid by the team, Monty tries to go with him, and he has to pay his own way. For instance, a recent tournament in Dallas, “that was a $1,200 weekend for me,” Monty says.

THE BENEFITS “I just wanted to give him what was not given to me,” Monty says. Monty says he thinks basketball will pay off financially for college. “He’s sparked interest from Georgetown, UConn, University of Virginia, Florida State,” Monty says. Monty predicts Jordan will end up playing basketball with scholarships to a Division 1 school. "I want to do something with it," Jordan says. "Hopefully play in the NBA."

A LESS INTENSE OPTION CYO of Long Island runs a recreational basketball program, and teams compete against other teams in Nassau and Suffolk counties. Though it's the Catholic Youth Organization, children of all denominations are welcome. Registration is through the local parish, and, while each parish sets its cost, the fee is typically between $100 and $200 for a 12-game season, says Paul Echausse, executive director of CYO of Long Island.

Tatiana and Kayla Cordero, 14 and 10, Farmingdale

THE TIME COMMITMENT Tatiana, who is in eighth grade, is on two competitive teams and Kayla, a fifth-grader, is on one with Premier All-Star Cheerleading in West Babylon. Tatiana has practice three days a week for between two and four hours each, and Kayla has practice twice a week for two hours each. Because cheerleading can call for back handsprings and other challenging maneuvers, both girls have gymnastics for an hour and personal training for 30 minutes weekly. Weekend travel for competitions usually involves trips for the whole family — which includes mom Jennifer, 33, an accountant, dad, Anthony, who owns a home improvement business, and younger sister, Aliyah, 5 — to New Jersey, Pennsylvania, Maryland and New York locations. “We travel about seven times a year. The farthest we’ve gone is South Carolina,” says Jennifer, who drives the girls to the Premier All-Star Gym for their sessions.

THE FINANCES “It can get a little crazy,” Jennifer says. In addition to team and training fees and $400 for each girl’s uniform, there’s the cost of hotels. She estimates the family spends at least $5,000 for everything each year. “I took my daughter out one year because it was getting pricey…. She was miserable,” Jennifer says. So she’s back in now. Jennifer says she anticipates having the same commitment for her youngest daughter. “My 5-year-old couldn’t wait because she sees the other ones out there. She just started this year,” Jennifer says. Her class is only once a week.

THE BENEFIT The girls learn life lessons, Jennifer says. “They win together, they lose together. They set goals for themselves, they meet the goals. It keeps them busy and out of trouble,” she says. “They build relationships and work as a team, they learn that when they come together they can accomplish anything … the life lessons and most importantly the joy it brings to my daughters is priceless.”

A LESS INTENSE OPTION Children can sign up for town or local cheerleading groups that cheer for a local youth football team and may participate in cheer competitions only on Long Island as well. Bay Shore Youth Cheerleaders, for instance, charges $225 for the season for kids ages 5 to 12, which includes practices, uniform and competition fees, says Grace Voges, vice president of the Suffolk County Youth Cheerleading Association and one of the coordinators for the Bay Shore program. The families will also fundraise to offset additional costs, Voges says.

THE TIME COMMITMENT Declan golfs with the PGA Juniors League at Eisenhower Park twice weekly and participates in tournaments on weekends. “My husband has to be there with him for four hours because he can’t be left alone. He’s 7. He’s still a kid,” says mom Blair Stack, 38, a stay-at-home homemaker. The Stacks also have three other, younger children who do activities, including swimming, lacrosse, gymnastics, dance and baseball and they have a live-in au pair to help with driving so Declan can get to his golf commitments.

THE BENEFIT Stack says she and her husband, David, 41, who works in finance in Manhattan, are prepared to invest more time and money in Declan’s continuing golf activities because he’s shown them he’s passionate about the sport since he was a toddler and had a set of Fisher-Price golf clubs. “He wouldn’t sleep in the crib unless I put those blue plastic clubs in there with him. He would live on the golf course if I let him,” Blair says. “With Declan, we do believe he will follow this on his life path.”

A LESS INTENSE OPTION The First Tee of Nassau County offers a seven-week course for $140 at Eisenhower Park for ages 5 to 17 that meets once a week for an hour, says Justin Koff, program director. Towns also may offer youth golf lessons.

THE TIME COMMITMENT Emily, a freshman at Huntington High School, plays on the school’s junior varsity lacrosse team, which practices six days a week from March to May, coaches a team of second-grade lacrosse players two days a week, and plays for a competitive travel team called Team Elevate that requires tournament travel in the fall, including to Florida in November, and tournaments from Virginia to Massachusetts in the summer. “I no longer have summer weekends,” says mothers Debra Geller, 49, an independent contractor who works from home. “Your life really focuses around lacrosse. You can’t miss practices. You can’t miss games.” Emily also works with a personal trainer on stick skills and defense for one hour every Sunday.

THE FINANCES “It becomes a huge investment to make,” says Debra. With fees, equipment, uniforms, training and travel, Geller and her husband, Gregg, also a 49-year-old independent contractor, spend close to $6,000 a year on lacrosse alone; they also have a son, Aidan, 12, who plays soccer, but not to the extent that his sister plays lacrosse. “You really have to weigh the options,” Geller says. “Do your investigating. Speak to the other parents who are in that league. It’s a commitment, but if you want to see your child succeed and have a passion for something, in the end it’s worth it. You do what you can do for your child.”

THE BENEFIT “I like watching her growth,” Debra says, adding Emily has learned how to both win and lose graciously, how to work under pressure and how to work with a team." Says Emily: “I really love the pace of the game, how fast it goes. I like the fact that it’s not just running, you have to have a lot of stick work and you have to use your hands. I think it would be a really cool experience to play at college.”

A LESS INTENSE OPTION Most towns have recreation lacrosse teams for kids, many of them through the Police Athletic League. Huntington Village Lacrosse, for instance, plays as part of the Nassau PAL system, says David Evans, president of Huntington Village Lacrosse. “The premise is we teach the game, we have high school kids who get involved in the coaching,” he says. “We have kids who are not very athletic that are on the team, that are welcome to be part of the team.” Games are all played on Long Island, and cost about $150 to $200, says Mike Nelson, president of the Nassau County PAL Youth Lacrosse League.

7 best LI playgrounds worth the driveThese parks offer more than just swings and slides. 5 unique LI day trips for families Here are a few ideas for thematic day trips guaranteed to please the whole family. 50 best places for families on LIFind out where LI parents love to take their kids.