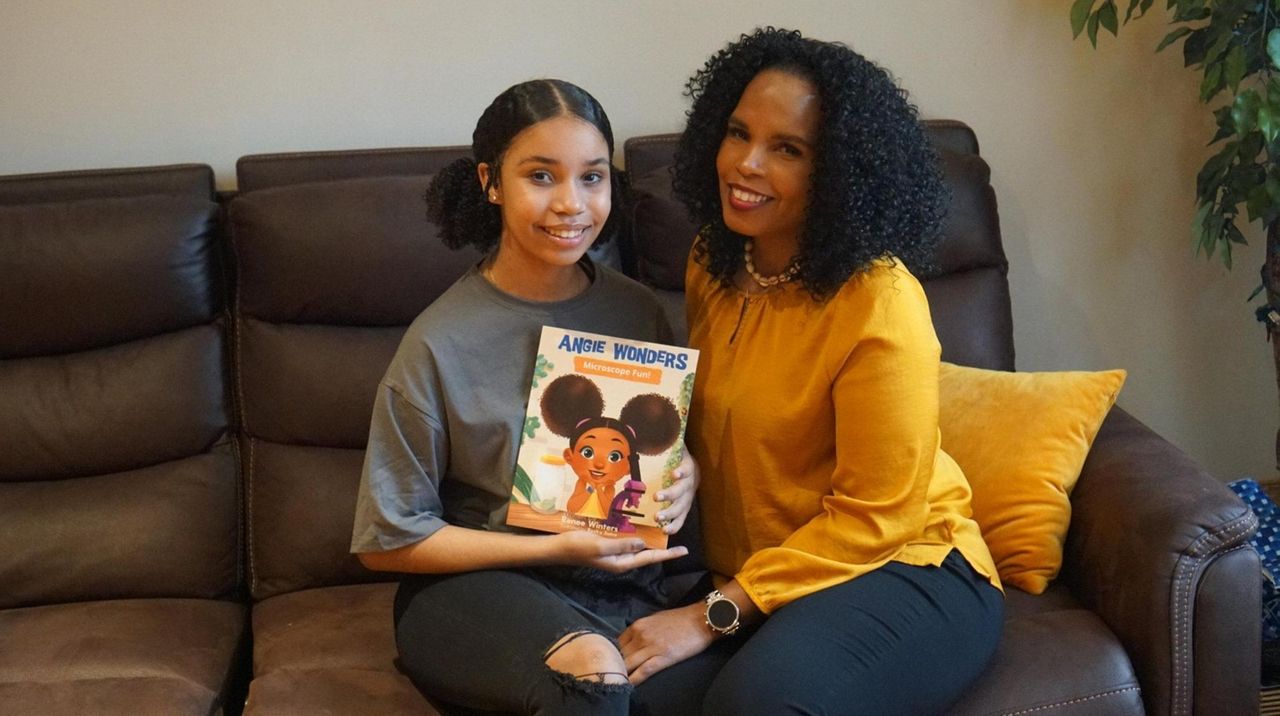 Renee Winters, of Deer Park, in part inspired by her daughter, Angelina, now 14, has written her second children’s picture book in the “Angie Wonders” series, aimed at inspiring girls of color to love science and math. Credit: Renee Winters

School's out, and reading for fun is in: Three Long Islanders are out with new children's books that help teach little ones not to be afraid of monsters, insipire elementary school girls of color to explore STEM, and present middle grade readers with a story of a best friendship based in a Long Island town.

Angie Wonders is the character’s name — but it’s also a description of her personality in a new children’s picture book by a Long Island assistant principal called “Microscope Fun," meant to inspire young girls of color to explore science and math.

Renee Winters, 51, who lives in Deer Park and works at Stratford Road Elementary School in Plainview, says she was at an educators’ conference that talked about how when girls were asked to draw what a scientist looked like, they often drew white males wearing white jackets. “No one saw themselves in that role,” she says.

Winters has a daughter herself — Angelina, now 14 — and she wanted to write children’s books that would inspire girls like her. She named the character Angie in a nod to her daughter and gave the last name Wonders to encourage girls in kindergarten through fourth grade to be curious and ask questions about the world.

“It’s so important that we do empower our girls,” Winters says. She and her husband, Todd, 52, who works for the U.S. Postal Service, also have a son, Alec, 21, who's a musician. “I try to expose my daughter to everything I expose my son to.”

This book tells the story of Angie's excitement to receive a new tool — a microscope. “She’s enthralled by looking at it,” Winters says. She looks around for things to examine and draws what she sees through the lens.

The first book in the series, 2019's “What is the Sun?”, has Angie waking up and noticing the sun outside her window and asking her father what it is. “From the moment she wakes up, she questions what is going on in the world around her,” Winters says. Each book includes a nonfiction, educational page for parents to use with the children, she says.

Winters is working on a third Angie adventure, this one about mathematics. The softcover, self-published books — Winters also created Positive Energy Publishers — are available on Amazon.com for $10 each.

“I’m very proud of my mom,” says Angelina, a rising high school sophomore. “It’s really important to educate young Black girls what they’re capable of. I feel like little girls will be inspired by the books to explore different subjects.”

Scavenger hunts are all the rage right now, and Greenlawn author Gae Polisner’s latest book features hunts that tween best friends Lukas and Joy, who live in a fictional Long Island town, have been creating for each other every year because their summer birthdays are two days apart.

“Seven Clues to Home” (Random House Children's Books, $16.99) tells how Lukas plants clues for Joy on the day before her 12th birthday in their town of Port Bennington, which Polisner says is modeled after Port Washington. But, tragically, he dies that same day. Joy can’t bring herself to follow the clues until a year later, on her 13th birthday. “In the process of looking for the clues, Joy finally finds a way out of her grief,” Polisner says. Polisner says she is proud that Book List called the novel “a modern-day ‘Bridge to Terabithia.’”

This is the sixth book for Polisner, 55, but her first one aimed at middle grades ages 8 to 12. Her previous books for kids have been aimed at the young adult category. This is also the first book she’s co-authored — the book is told through the two characters’ voices. Polisner wrote the character of Lukas, while Connecticut author Nora Raleigh Baskin wrote the character of Joy.

“I write boys often. They’re more straightforward to me,” says Polisner, who also wrote as a boy character in her most popular young adult book, “The Memory of Things,” a post 9/11 story published in 2016. She and her husband, David, 55, a lawyer, also have two sons, Sam, 24, and Holden, 22.

In conjunction with the June launch of “Seven Clues to Home,” the Huntington Public Library has a complementary — and complimentary — mini scavenger hunt on its Facebook page that children can do themselves. Huntington youth and parent services librarian Andrea Pavlik says she “absolutely loved” the book. “It’s sad, but it’s sad in a good way. I read it in one day; I couldn’t put it down.”

When 16-year-old Brandon Cohen of Jericho was little, he used to have trouble falling asleep at night, worried about monsters. He likes to draw, and one day, when he was doodling on the side of his high school math work, he sketched what he thought a monster that lives in the closet might look like.

“This whole idea arrived in my mind that these monsters are actually dream catchers, and they try to help you by capturing bad dreams and turning them into good dreams,” Cohen says. That idea is now a children’s picture book called “The Dream Teams.” It tells the story of a little boy whose grandmother cures his fear by explaining that the monsters work together to protect him while he’s sleeping, not hurt him.

Cohen broached the idea of a book to his parents, who fronted him a budget of $1,000 to hire a freelance illustrator on a website platform called Fiverr to take his sketches and turn them into reality. He also worked with an editor on the storyline. “It was a very hard process. I wasn’t expecting it to be that hard,” Cohen says.

But the high school senior stuck with it and now his 24-page, softcover, self-published book is available for $12.99 on Amazon.com. He says he is donating any profits from the book sales to Pet Peeves, a Long Island nonprofit that supports animal shelters and rescue groups in honor of his own dog, a Shih Tzu-Yorkie named Corduroy.