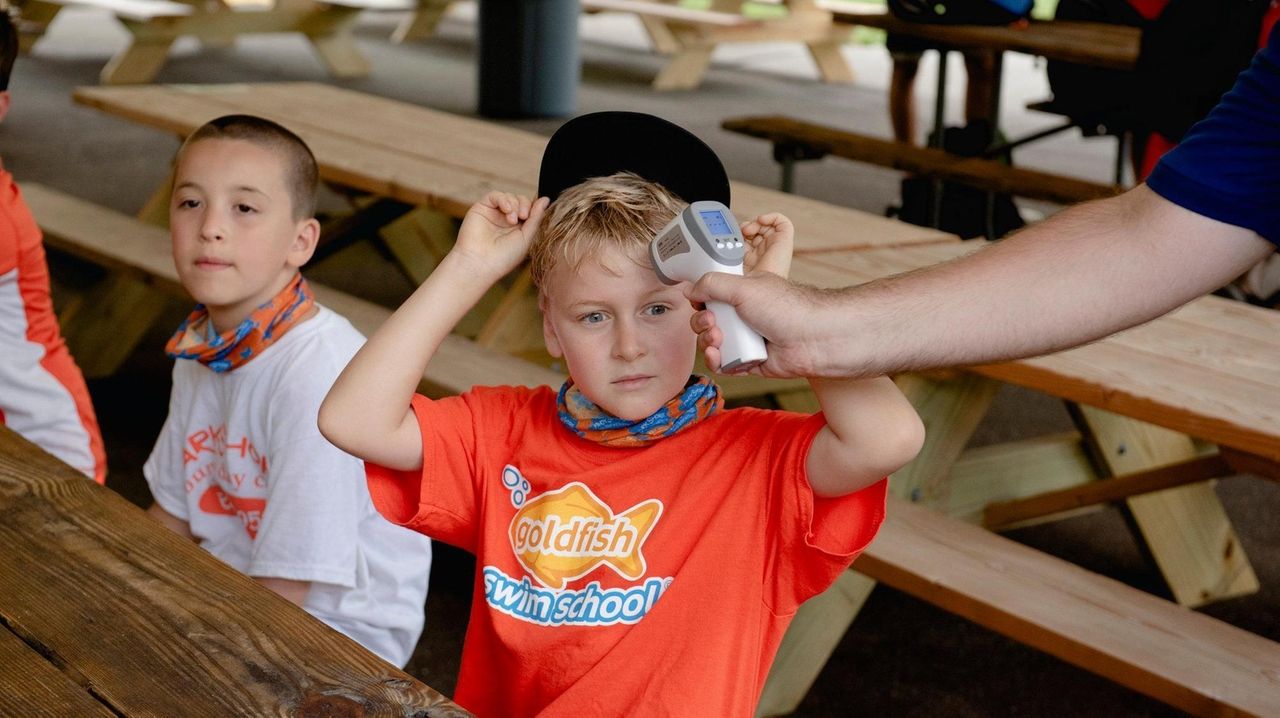 A glimpse inside Park Shore Country Day Camp, in Dix Hills, where changes have been made amid the pandemic to keep campers safe. Credit: Johnny Milano

After months of at-home schooling, Sam Allison has a new routine: The 10-year-old wakes up in Melville, eats a breakfast of pancakes, puts on sunscreen and dresses for a day at Park Shore Country Day Camp in Dix Hills — he likes to wear his bathing suit and a T-shirt to make it easier to change for swim. This is Sam’s fourth summer at Park Shore, but his first during a pandemic.

His weekdays start differently than years past — instead of being picked up by the camp bus, his mom, Alyssa, 40, a teacher, now drives him. Eliminating transportation is one adjustment many camps have made to keep kids safe; other modifications have been mandated by the CDC and local health departments. To show us what is different, and what's stayed the same, Sam and his camp group friends take us through their summer day, from 9 a.m. arrival to 3 p.m. ice cream and pickup.

“We had to pull up with masks on, and they take the kids’ temperatures before they get out of the car,” says Nikole Willman, an occupational therapist from St. James whose son, Fynn, 9, is in the same group as Sam and is attending Park Shore for the first time. The Willmans signed him up because Fynn was craving socialization, she says. “When we pulled into the parking lot the first day? I haven’t seen him smile like that in four months." DJ music was playing, the bounce houses were in the distance and all the camp counselors were cheering. Says Fynn: “In the beginning, when you get out of your car, you can see all the fun stuff waiting for you to go to." A counselor walks each camper to his or her group.

“Before anything, we have to wait on the baseball field for everyone to get there. I bring Legos or Pokemon cards,” Sam says. Groups of up to 15 campers wait separately; Sam and Fynn’s group of boys is dubbed the Steelers for the sports team. The kids in that group will be the only kids they interact with throughout the day. Sam usually attends the camp’s “Extreme Steam” science program, but because it’s based indoors, it’s not running. “First period we went to rock wall,” he says. Sam says the harnesses were sprayed with disinfectant between users. “They spray right away, as soon as they get out of it,” he says. While some of the group was climbing, the rest of the group went on the bouncy slide. That was really fun, too, Fynn says. “I always like going to birthday party places and being able to go on the big, tall slides,” he says.

The group next moved to play gaga, a variant of dodgeball. Once campers are in their groups, they can take off their masks but must put them back on when they're on the move within the camp. “We usually wear masks when we’re walking by other groups. Park Shore handed out gaiters,” Sam says, which are worn around the neck and pulled up over the mouth and nose when necessary. “I had it on all day except for swim.” The activity periods during the day are longer — they used to be 30 minutes; this year they last 40 to 50 minutes to cause less movement within the camp. Says Fynn: “I’m really good at gaga, so it’s really fun. Personally, the best thing, I think, is volleyball. I made a lot of friends. The first friend I made, we met by liking the same sports.”

Temperatures are taken again at lunch. “It’s just like a little quick head swipe, and then it’s over,” says Sam. Says Fynn: “We stayed at our table. We just stayed with our group. We at least stayed 10 feet apart from other tables.” Campers can bring their own lunch or they can have lunch provided by the camp. "I usually get the camp lunch," says Ethan Grossman, 8, of Smithtown. Wednesday's offering: meatball hero sandwiches. “We have a VIP garbage can right by our group, and you need to use that one," Sam says.

“We also went swimming. It was really good because it was really hot out. It was really refreshing to go in the water,” Fynn says. Buoy lines separate groups into sections to keep them distanced during swim. Instead of swimming twice during the day, once for lessons and once for free swim, the period is twice as long and the two swims are done back-to-back. "It's weird seeing lifeguards with face shields," Ethan says. "Everything else is the same."

Instead of a regular basketball game, the group played “knockout,” in which they line up to compete, Fynn says. “Whoever shoots the ball into the basket first, wins,” Fynn says. “It was really fun, I loved it.” The physical play and interaction is important for children, says Peter Byer, 45, a lawyer from Commack, whose son, Brendan, 9, is also in the Steelers group.

Sports are confined to competition within the group this year, says Brendan’s older sister, Kayleigh, 14, who is a C.I.T. of 4-year-old campers. “They would usually do soccer tournaments and there would be prizes,” she says. Brendan says he misses playing sports against other groups in camp competitions dubbed the World Series, World Cup and Stanley Cup. What about kids who don’t love organized sports? Sam says he prefers to be the sports broadcaster, and that’s the role he takes on when the group plays hockey or soccer. “I was announcing the entire thing, using my Gatorade bottle as a microphone,” he says of the day's hockey faceoff.

“I’ll tell you when it starts getting different — dismissal,” Sam says. Before, kids would get on buses to go home. “Now, you have a special dismissal time where your parents come to pick you up and they call your name. The counselor brings you over to the parking lot to go to your car.” Says Elyssa Byer, 43, a school social worker from Commack and mother of Brendan and Kayleigh: “When I pick them up in the afternoon, I’ve never had to wait.” The camp staggered drop-off and pickup times between groups to help things flow. “As soon as they get home, they wash their hands and change their clothes,” she says.

Fynn’s mother, Nikole Willman, an occupational therapist from St. James, sums camp up this way: “It’s been fantastic so far. Socially and emotionally, it’s been exactly what he needed.” Sam seconds that motion with one simple statement. "I'm pretty happy," he says.