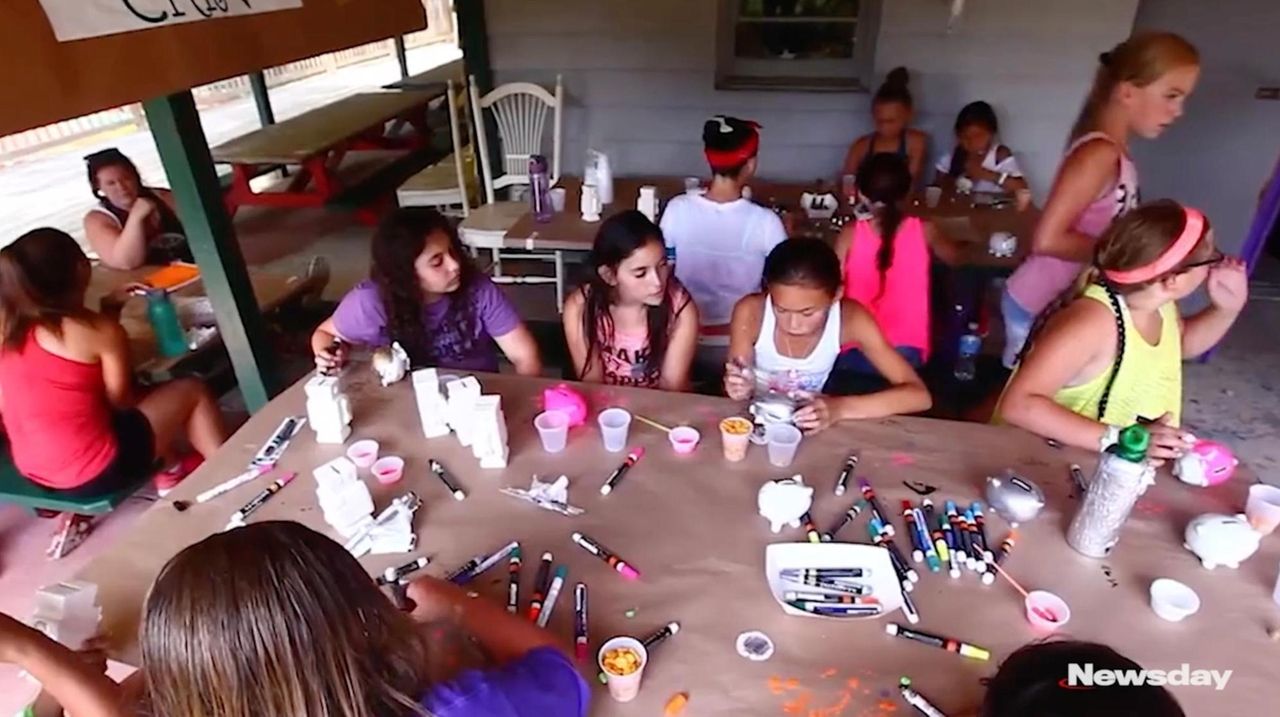 Mark Transport, the president of the Long Island Camps and Private Schools Association and the co-owner of Crestwood Country Day Camp in Melville, discusses how camps may change this summer. While some day camps have canceled their summer season, Transport is still aiming to open his with safety measures in place.    Credit: Newsday / Megan Miller; Skype; Coleman Country Day Camp

At Pierce Country Day Camp in Roslyn,  changes have been made to meet the new demands for day camp: A one-way road has been built through camp so parents can drop campers off directly to their group counselor. New, separate picnic areas are set up to allow each group to eat lunch without exposure to others. But the spirit of activities that make day camp fun for children remains, Pierce co-owner/director Will Pierce and other Long Island camp directors say.

Here’s a roundup of what parents may want to ask about how their child’s summer camp experience will be different this year, keeping in mind that protocols are evolving and may change as the season unfolds:

Will children be screened on arrival?

Parents will be asked three questions required by the CDC: Has your child been exposed to anyone who has tested positive for COVID-19? Has your child been near anybody exhibiting symptoms? Does your child show any symptoms? Older children may be asked directly. Then, the child’s temperature will be taken, and many camps are requiring that if it is 100.4 or higher, the child goes home, says Dan Weir, president of the New York State Camp Directors Association and senior director of program development for the YMCA of Long Island, which has camps in Glen Cove, Huntington, Bay Shore, Patchogue and East Hampton.

Rick Lewis, CEO of the Mid-Island Y JCC, which has camp at the Henry Kaufmann Campgrounds in Wheatley Heights says camps must err on the side of caution and require the child to stay home until the fever resolves. If they exhibit other symptoms and test positive for COVID-19, they will have to quarantine, he says.

Will camp groups be smaller?

Camps will likely operate at reduced capacity. Pierce, for instance, is voluntarily operating at 50% so it can spread campers over its 27 acres, Pierce says. Right now, each group — or cohort, as they are being dubbed this year — will consist of up to 15 campers as limited by the New York State Health Department. Each group is required to have the same counselors throughout the season, Pierce says.

What if someone in my child’s group tests positive?

Camps are required to report cases to the county Department of Health, which will follow up. The child should be excluded from camp for two weeks; his or her entire cohort will very likely also have to quarantine for up to two weeks, camp directors say.

What if a child gets sick at camp?

Some camps, such as Pierce, have a pediatrician on the grounds. They will also have a separate area for children who may exhibit COVID-19 symptoms. Pierce has gotten approval for testing and analysis and will be able to use a nasal swab on site, Pierce says. “If it is the worst-case scenario, if it is a case of COVID, we can react sooner,” Pierce says. Says Lewis: “We will isolate the camper immediately and have the parent pick them up.”

Camps are discouraging carpooling. If someone has a fever or symptoms, the entire car’s passengers may or may not be required to go home as well, depending on that camp’s policy, Lewis says. Pierce will only allow carpools if the campers are in the same group, Pierce says.

Campers aren’t required to wear masks outdoors. Counselors must wear them any time they are within six feet of a camper or interacting directly with campers, even when outdoors, as currently required by the New York State Department of Health. Campers will need to bring a mask in their backpacks in case they need to go indoors; camps will have extra disposable masks available, directors say. Pierce has had special face coverings with a design made for counselors that can be worn around the neck and pulled up over the nose and mouth. “They’re going to be a collectors’ item in five years,” Pierce says.

Camps are keeping traditional arts and crafts and sports activities but modifying them. For arts and crafts, camps may have separate supplies for each cohort, or even each camper. For sports, the camp may focus on skill development or fitness activities versus competitive play, Weir says. For instance, instead of playing a basketball game, the group may focus on a dribbling clinic, he says. Equipment will be disinfected between groups, camp directors say. Full camp activities such as carnival or color war will be curtailed unless they can be done with the cohorts separated, camp directors say.

As for swimming, some camps may have more than one group in a pool at a time, but they will be separated in the water and leave the pool area before other groups arrive, camp directors say.

How often will facilities be cleaned?

Camps say they will sanitize activity areas between each group and at the end of the day. “We bought a lot of pretty cool equipment, electrostatic equipment,” Pierce says.

Will visitors — or parents — be allowed on the camp grounds?

Will children be taken off camp grounds for trips?

“No,” is the answer from most camp directors.

How will lunch be handled?

Some camps that ordinarily offer food service have chosen not to this summer. Many camps have established more picnic areas for lunch or are moving existing tables so groups will be sitting six feet away from each other. “Sometimes, that’s not possible,” Lewis says. At Park Shore Country Day Camp in Dix Hills, temperatures are taken once again at lunch.

What will happen if it rains?

If the camp has the ability for groups to be separated indoors, they will move activities inside. Other camps are establishing a “rain day” policy. “You know about snow days in school?” Pierce says. Rain days will be similar; if a day is going to be a washout, the camp will call parents to cancel by 7:30 a.m., he says.

Will there be refunds for rain days or sick time?

Camps are handling this in different ways. At Pierce, for instance, there won’t be a refund for the first three rain days. After that, parents will get a refund of $100 per rain day or can use it as a credit toward the summer of 2021. As for sick days, if a child or cohort is required to quarantine the family will get a $100 per day refund or credit for the following summer, Pierce says. Other camps, such as the Mid-Island JCC, may only offer the credit for the following year. “It’s a very difficult situation because we are committed to paying our staff, to buying cleaning supplies,” Lewis says.

Will staff members limit exposure on evenings or weekends?

That’s one of the most frequent questions that Lewis says he sees parents asking. “We ask the staff to respect the rules provided by the government,” Lewis says. “Unfortunately, that’s all we can do.”