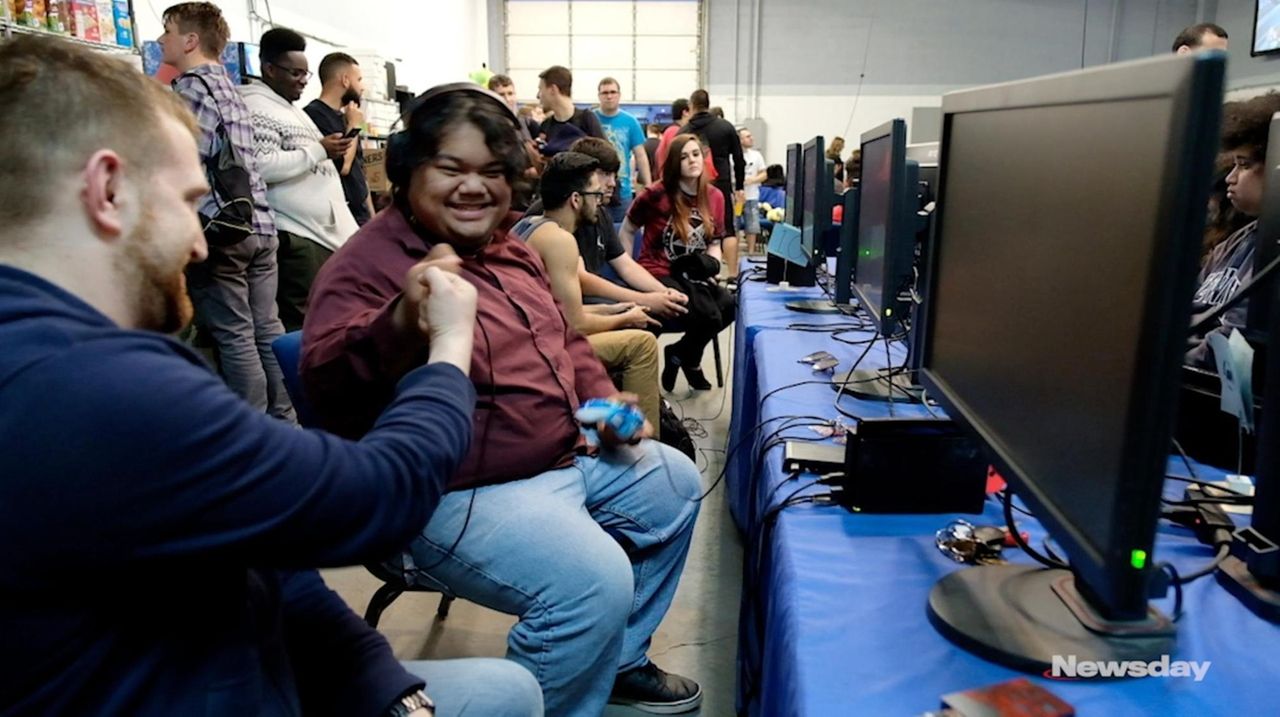 Smash Bros. tournaments are held every Friday at AON Gaming in Deer Park, but they are upping the ante by partnering with Game On Fest to host a tournament at The Paramount in Huntington with a $5,000 cash prize and some of the best gamers in the business. Credit: Jeff Bachner

A $5,000 prize pool and a chance to battle nationally ranked talent entice Super Smash Bros. competitors to sign up for the inaugural “Game On Fest — Smash @ The Paramount” on June 15 in Huntington. But even more compelling, some say, is the opportunity to gather with the gaming community in an arena-style venue on Long Island.

Typically, local tournaments occur in gymnasiums and hotel ballrooms, says Kris Renkewitz of Huntington, event promoter. This one-day event will bring video game competition to “a big-style arena locally” with the opportunity to involve 512 players and hundreds more spectators, he says. Name players who have registered include Samuel “Dabuz” Buzby, 25, of Nesconset, who is a top-tier player nationally and earns his living by gaming, and Ezra "Samsora" Morris, a high-profile player from Florida.

“I’ve always wanted to attend local tournaments because it’s a huge community thing,” says Will Rurup, 20, of Coram, a student of radio and television production at Suffolk County Community College. “It’s so much fun to play these games with other people who play these games, a whole roomful of people, people cheering.”

COMPETE WITH THE BEST

That's exciting to participant Kofi Amanquah, 20, of Brentwood, who works at the Brentwood Public Library. "There's a lot of big names going to the tournament," Amanquah says, citing Buzby and Morris.

“It’s my job to do this,” says Buzby, who earned an economics degree from Stony Brook University. “I go traveling all the time. Right now, I’m in Canada. I can make a good living off of this. It’s a dream come true, actually.”

Megan Behzadi, 26, of Greenlawn, who works for the Suffolk County Department of Health, has never been to a tournament before but decided to check this one out partly because it's happening so close to home. "Let's be honest, I know I'm not going to win this tournament. I'm doomed," she jokes. "That's OK, I'm going to have fun."

Activities throughout the day will include game demos, vendors and music. Food and drinks, including alcohol, will be sold. Entrants must be at least 16; those younger than 18 must be accompanied by an adult, with one adult required for up to three minors, Renkewitz says.

Player Jeme Casco, 22, of Bellmore, a host at Red Robin and an adviser at GameStop, explains a Super Smash Bros. game as akin to virtual sumo wrestling — you don’t want your character to be knocked out of the ring. Competing characters use super powers to try to defeat each other — one might be a master swordsman, throw fireballs or even use magic, Casco says. But though it’s a fighting game, the contenders are all cartoonish Nintendo characters, Casco says, comparing them to cartoon adversaries Tom and Jerry or Wile E. Coyote and the Road Runner.

“It good to win. That’s the basics of it,” Casco says. “In sports, people feel good when they hit a home run or catch a touchdown pass.” Casco says he feels the same euphoria when he vanquishes a video game opponent.

“It lets me find friends with similar interests, which is a big deal for me,” Schook, who has autism, says of playing Smash Bros. “Before I didn’t have many friends. Now I have a ton of friends because of tournaments.”

Jules Blandino, 17, a recent high school graduate from Ozone Park, Queens, says the tournament lets people who are not physically athletic have the opportunity to be competitors. "I’m proud of the community for getting a regional going on Long Island,” Blandino says. “It’s really going to be something.”

WHAT Game On Fest - Smash @ The Paramount

INFO To compete: $50 through June 1; $60 June 2 through day of event at smash.gg/tournament/smash-at-the-paramount. To watch: $30 at ticketmaster.com, paramount box office or on site on day of event. Entrants must be at least 16; those younger than 18 must be accompanied by an adult, with one adult required for up to three minors. For more information, email AONGamingLLC@gmail.com.

HS freshman earned $200,000 playing FortniteFour ways to turn gaming into gold. 7 family-friendly waterfront restaurants on LIWaterfront dining on Long Island doesn't have to be a formal affair. There are plenty ... 8 family-friendly LI parks with perks Yes, there are walking trails at these parks, but you can also see wildlife, spy the New York City skyline, ride a carousel and do lots more.