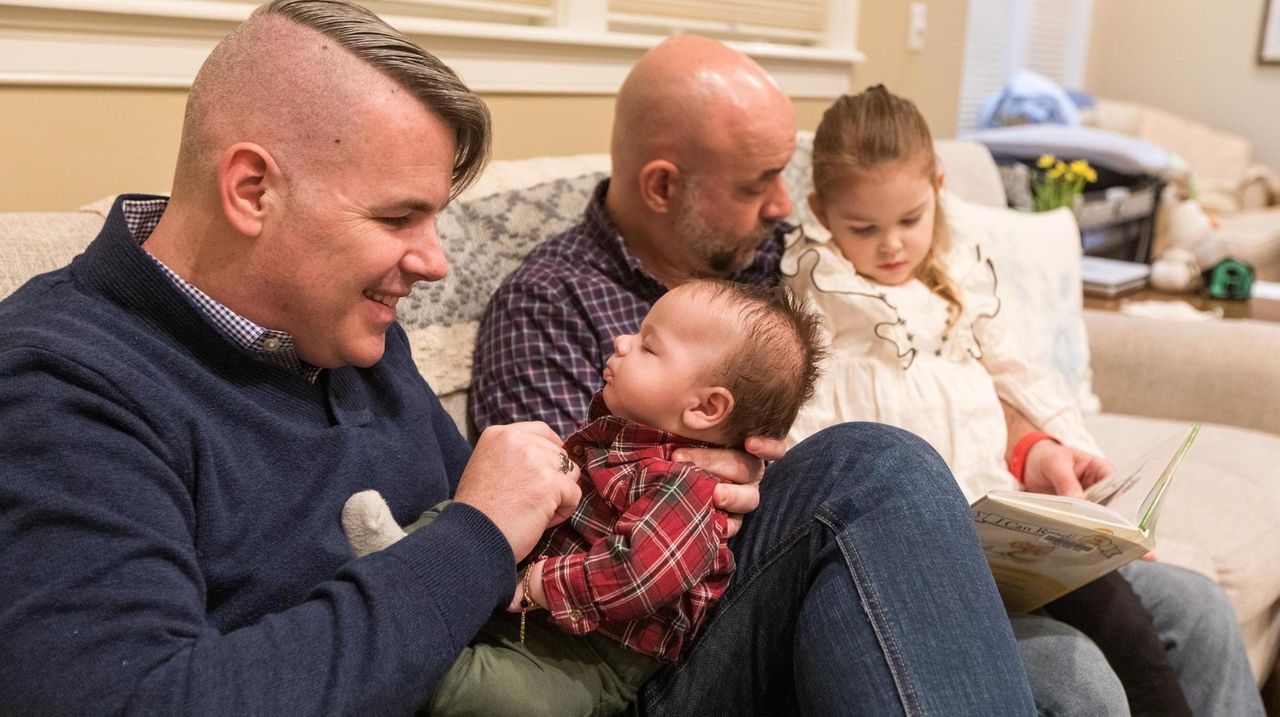 Sean Braut-Doherty and his husband Steve, of Northport, had to travel to Florida to work with the surrogate who carried their two children because it is not legal in New York State for a woman to be compensated for carrying a baby that isn't biologically hers. They spoke to Newsday on Wednesday about New York state legalizing surrogacy and what that could have meant for their family.  Credit: Barry Sloan

Women in New York can be compensated for carrying babies that are not biologically their own under a law that goes into effect Feb. 15. Previously, intended parents had to go to other states to seek such help to grow their families.

"Now, you can recruit a gestational surrogate in New York State and have her be compensated for her time, risk and effort in carrying the pregnancy," said Dr. James Stelling, a fertility specialist and co-founder of Stony Brook Community Medical-Island Fertility, referring to the Child Parent Security Act.

Stelling, for instance, has a patient who was born without a uterus and will need a gestational surrogate to have a biological child. The act will also be a boon to gay men who want to have children, proponents said.

The law was passed by the State Legislature on April 2, 2020, as part of the New York State budget and signed into law by Gov. Andrew M. Cuomo, capping a 10-year-effort by a coalition of New York attorneys, fertility organizations and LGBTQ rights groups, said Denise Seidelman, a Rockland County attorney who helped write the law. New York was one of only three states that fully banned compensated gestational surrogacy; the others are Louisiana and Michigan, she said.

Megan Smith, 34, a nurse's assistant from Coram who has three children, is ready to become a surrogate for a family with whom she connected on a Facebook group that helps to match potential surrogates with intended parents. "My kids are my entire life," Smith said. "I had no problems getting pregnant. I couldn't imagine being in a situation where I couldn't have my children."

"It was always really ridiculous that of all places, it was this state that was inhospitable, hostile to gestational surrogacy, with so many gay men in this region who were ready to become parents," said Ron Poole-Dayan, executive director and founder of the New-York based nonprofit Men Having Babies.

Sean Braut-Doherty, 37, a teacher from Northport, and his husband Steven, 46, a personal trainer, had to travel to Florida to work with the surrogate who carried their two children, Charlotte, 5, and Grant, 8 weeks.

"It would have been much easier to form our family here," Sean said. Added Steven: "We would have been able to go to more doctor’s visits and have more meetups in general if she wasn’t so far away."

Alex Peyser, 32, who grew up in Great Neck and lives in Manhattan, and her husband, David Seidenberg, 33, an art dealer, have one son, Abie, 2, born with the help of a surrogate from Tennessee.

"Obviously, it added more obstacles to the process, which is complicated in the first place," Peyser said of matching with a surrogate from another state. Peyser was born without a uterus and always knew she would need a surrogate to give birth using the couple’s embryos. They are planning for another child now and hope to work with a surrogate from New York this time, said Peyser, who is a fertility fellow at Northwell Health in Manhasset and went into the field because of her own experience.

The law requires that the baby not have any genetic relation to the carrier; in other words, it must be an intended mother’s egg or an egg or embryo from a donor, said Amy Demma, an East Hampton-based assisted reproductive technology attorney. The law sets out a Surrogates' Bill of Rights that ensures the surrogate is represented by her own attorney, has health insurance paid for by the intended parents and retains the ability to make decisions for the pregnancy.

The law currently requires that one of the intended parents and the carrier be New York residents for at least six months before the commencement of an agreement, and that they be U.S. citizens or permanent residents, said State Sen. Brad Hoylman (D-Manhattan), who sponsored the bill in the Senate and who has two children born from California gestational surrogates.

Proponents are seeking to allow intended parents from other states to contract here, but residents of other countries will not to be allowed to participate, Hoylman said. "We want to discourage surrogacy tourism," he said.

Altruistic surrogacy, in which typically a family or friend volunteers to carry a child and isn’t compensated, has been legal in New York and remains so, Demma said. Traditional surrogacy, in which the surrogate’s own eggs are fertilized, giving her a biological connection to the child, remains unenforceable and compensating her remains illegal; that’s been the case since 1988 when Marybeth Whitehead, who lives on Long Island, entered into a traditional surrogacy arrangement but changed her mind and wanted to keep the baby, setting off a court battle for custody.

The law does more than legalize compensated gestational carriers; it streamlines other processes for intended parents, such as allowing them to get a court order recognizing them as the parents at the moment of birth, Demma said.

The Albany-based New York Surrogacy Center has started to recruit on the Suffolk County NY Mom’s Group Facebook page. "I am hoping to spread the word about the amazing opportunity to become a surrogate and give the gift of parenthood while earning up to $40,000," a post said.

"The surrogates that we work with are people who have had their own families and have had relatively uncomplicated pregnancies and are desirous of helping other people experience the joy of being parents," said Joe Williams, the center’s director of surrogate services.

"When the surrogate lives not too far from the intended parents, it’s better for everybody’s sake," said Rita Kardach, owner of Rite Options, a surrogacy matching service in Garden City. "It’s emotionally comforting."