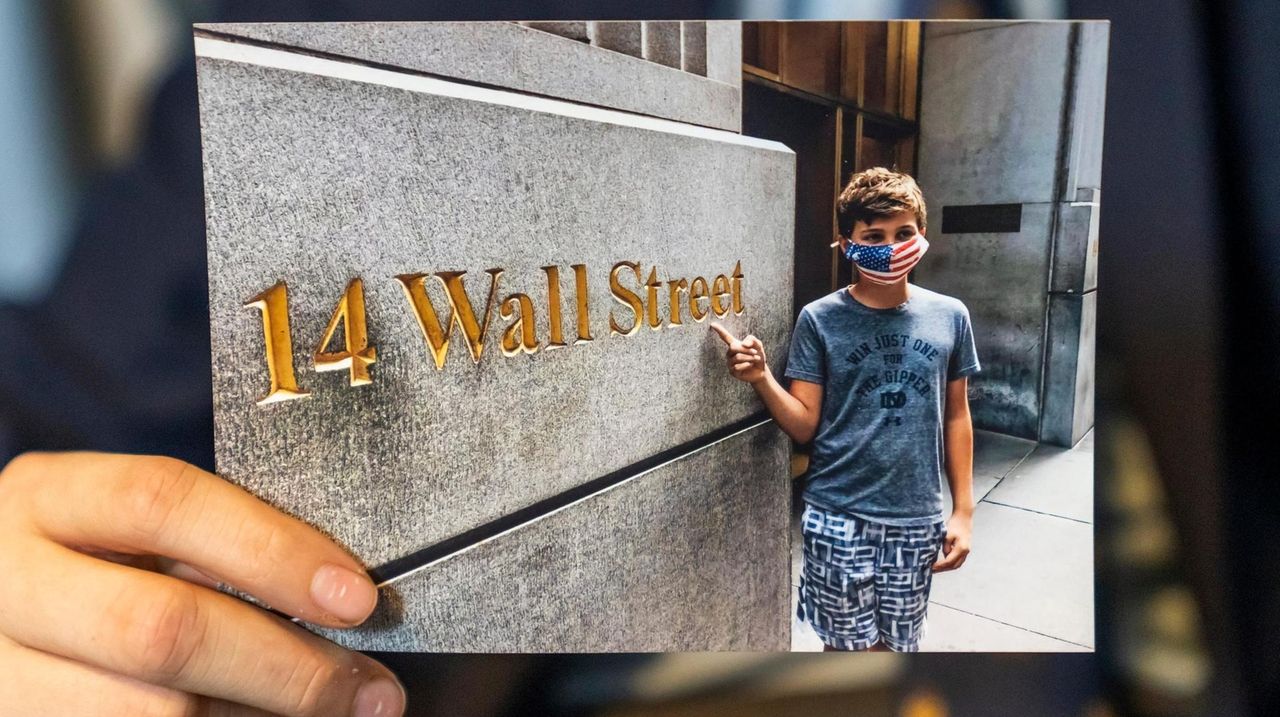 Shane Stephen of St. James found more than just a hobby in learning how the stock market works, he found a passion for trading. Credit: Randee Daddona

For his 12th birthday in October, Shane Stephen of St. James requested an unusual gift: He wanted a tour of Wall Street — to see the famed bull, to get close to the stock exchange, to walk by the office of TV personality Jim Cramer, host of CNBC’s "Mad Money."

So, his family booked a private tour with Annaline Dinkelmann, who for years has introduced New York City schoolchildren to the world of high finance. Shane liked the tour so much that his family asked if Dinkelmann gives classes.

As a matter of fact, she does. And while for the past 12 years they have been in person in Manhattan, since the pandemic began Dinkelmann continued her series of "Teach Me Wall Street" classes online and now can reach kids farther afield.

Thrilled, Shane signed up for her 10-week, after-school course called "Investing and Trading" that met once a week for an hour. "I learned what it takes to be listed on the New York Stock Exchange," Shane says. "She told us about stocks and IPOs and bonds and the beginning steps of trading." On January 25, Shane will begin taking a second course called "Wall Street 101."

Dinkelmann, who has worked for Morgan Stanley and as a day trader, offers three online course options: Wall Street 101, Investing and Trading, and Budgeting and Beyond. The classes are geared to ages 13 to 17, but Dinkelmann welcomes a highly motivated 12-year-old like Shane, she says.

Wall Street 101 teaches "who are the players and what do they do," Dinkelmann says. Teens learn about the Federal Reserve, which controls interest rates in an effort to manipulate inflation. "If money is cheap, like now, they want people to start companies and get rid of unemployment," Dinkelmann says. She teaches about the Securities and Exchange Commission, which she calls "the policemen of Wall Street." She’ll show students how if they owned hotel stocks in January, they would have had a bad year in 2020. However, "if you bought Amazon or Shopify, you would be singing all the way to the bank because you made so much money," she says.

In "Investing and Trading, Dinkelmann goes in-depth about how to read a stock chart, and how and when to buy or sell a stock. She teaches how to place a trade. Some students’ parents have opened accounts for them with small amounts of money to let them experiment, Dinkelmann says.

In Budgeting and Beyond, Dinkelmann has students investigate what education they will need for their career and what their chosen field would pay. Then she has them factor in payroll taxes and deductions, rent and necessities such as car payments and grocery bills. "What if your washing machine breaks, what are you going to do?" she’ll ask. She’ll talk about credit cards, how companies market to consumers, and how freedom of choice is reduced proportionally to amount of debt.

Halley Bodian’s son James, 16, of Oyster Bay, had thought he wanted to pursue digital filmmaking, but this fall expressed an interest in going into business instead. So, Bodian found Teach Me Wall Street online and signed James up for Investing and Trading; he’ll be taking Wall Street 101 starting this month.

"He loved every minute of it and he learned so much," Bodian says of the fall class. "He’s initiating conversations with me about Zoom and DoorDash. He’s much more aware of business."

James says Dinkelmann was "super nice" and that he never felt like he couldn’t ask a question out of embarrassment. "When I’m older, I think I want to go into finance because of this class," he says.

Shane has always dreamed of a career in business; he’s been investing in stocks since he bought Under Armor, PepsiCo and Fed Ex with his Communion gifts and made a profit. He’s also worked with his church, turning $10 they gave him to invest into enough money to donate a goat to a family in Haiti and sponsor a Kentucky Fried Chicken dinner for a group home in Port Jefferson Station.

Courses are $300 for 10 weeks; Dinkelmann gives a 10% sibling discount. For more information or to register, visit Teachmewallstreet.com.

For the first time, Annaline Dinkelmann will offer her Teach Me Wall Street classes to parents beginning in February. “So many mothers I’ve spoken to in the past six months have said, ‘I have to take this class that my kid is taking,’” Dinkelmann says.

Dinkelmann hopes that parents who aren’t aware of how investing works will open accounts and learn to place trades. That class will be 90-minutes a week for five weeks. For more information, visit Teachmewallstreet.com.