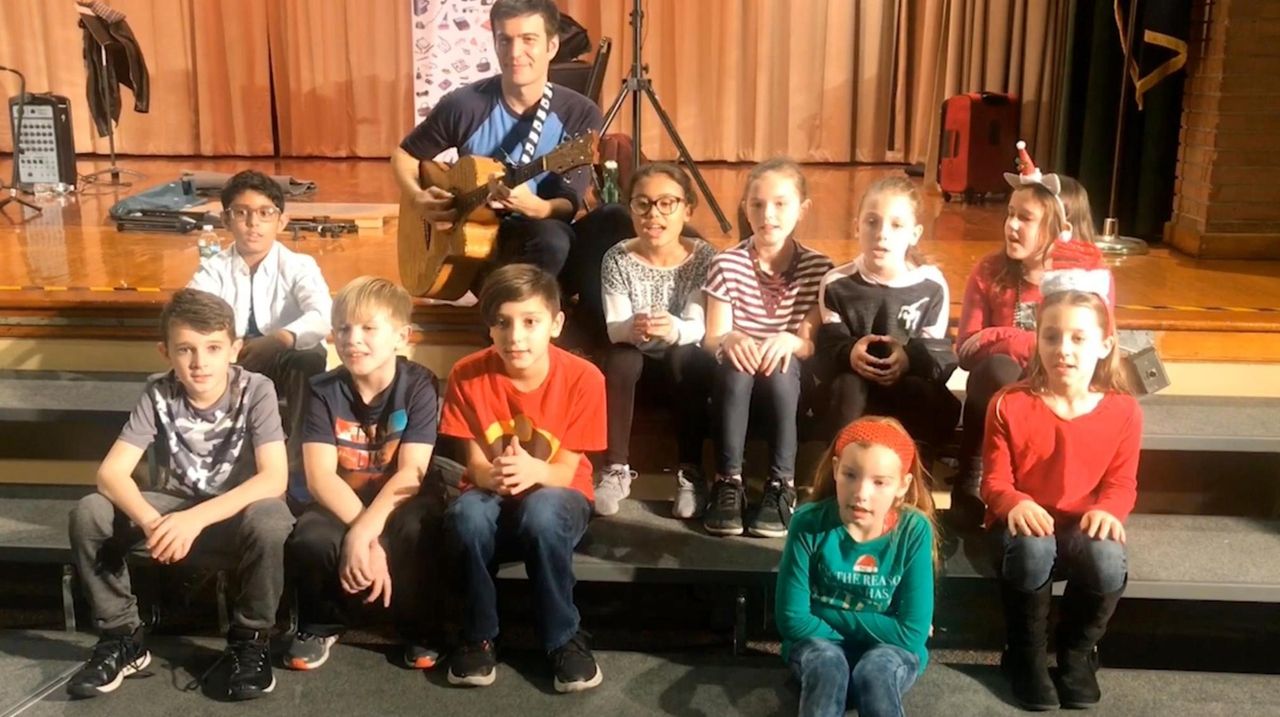 About 90 kids from a chorus in a Farmingdale elementary school will have bragging rights if children’s artist Tim Kubart’s album “Building Blocks” wins a best children’s album Grammy Award in February.

The now fourth-graders at Woodward Parkway Elementary School sing the chorus of a song called “We Are Growing” on the album. They recorded it in the school’s auditorium last year with Kubart, who grew up in Farmingdale and attended Woodward Parkway from kindergarten through sixth grade.

“We wanted to write a song that was the type of thing kids would sing at a graduation. We thought it would be kind of special if we brought a chorus of kids in to sing the song,” says Kubart, 34, who lives primarily in Los Angeles and leads a band that travels the country and the world singing for kids and families. He had heard the school’s third-grade chorus rehearsing on a visit to the school in 2017 — Kubart returns each year to give a concert for his grade-school alma mater — and he asked music teacher Stephanie Haas whether she would want to teach the kids the song and have them record it.

“I said, ‘Of course, I’d be honored.’ I couldn’t believe we would have the opportunity to do that,” Haas says.

She taught the students the song in about a month. “It was actually fun and easy,” says Francheska Espinal, now 9.

The kids can be heard singing the chorus, “And they say it’s my birthday, another candle on the cake, and I say, ‘It’s you I want to celebrate.’ We are growing into something, into someone, and I don’t even know what it is yet, who we are yet, but I trust that we will get there.” Some of the kids can also be heard on a few of the other tracks on the album.

Kubart was back at Woodward Parkway Elementary for his fourth annual concert on Friday, and he met with some of the kids from the choir, high-fiving them about their Grammy nod. “Because there are 90 kids singing on it, they’re all part of it, too,” Kubart says. “So we’re all nominated together.”

Haas says she had to explain to the kids what a Grammy is. Once they understood, they were excited, she says.

“To be nominated for the Grammy is special,” says Daniel Sattler, 9, of Farmingdale. “A lot of people don’t get the opportunity to do the Grammy.”

LI kids' unique names and the stories behind themSome parents name their children in honor of a loved one, while others take a different approach. Indoor places to play on LIIf you want to take the kids somewhere to play indoors, we've got you covered. 18 historic LI places kids will loveStep into the past, make crafts, explore nature and more.