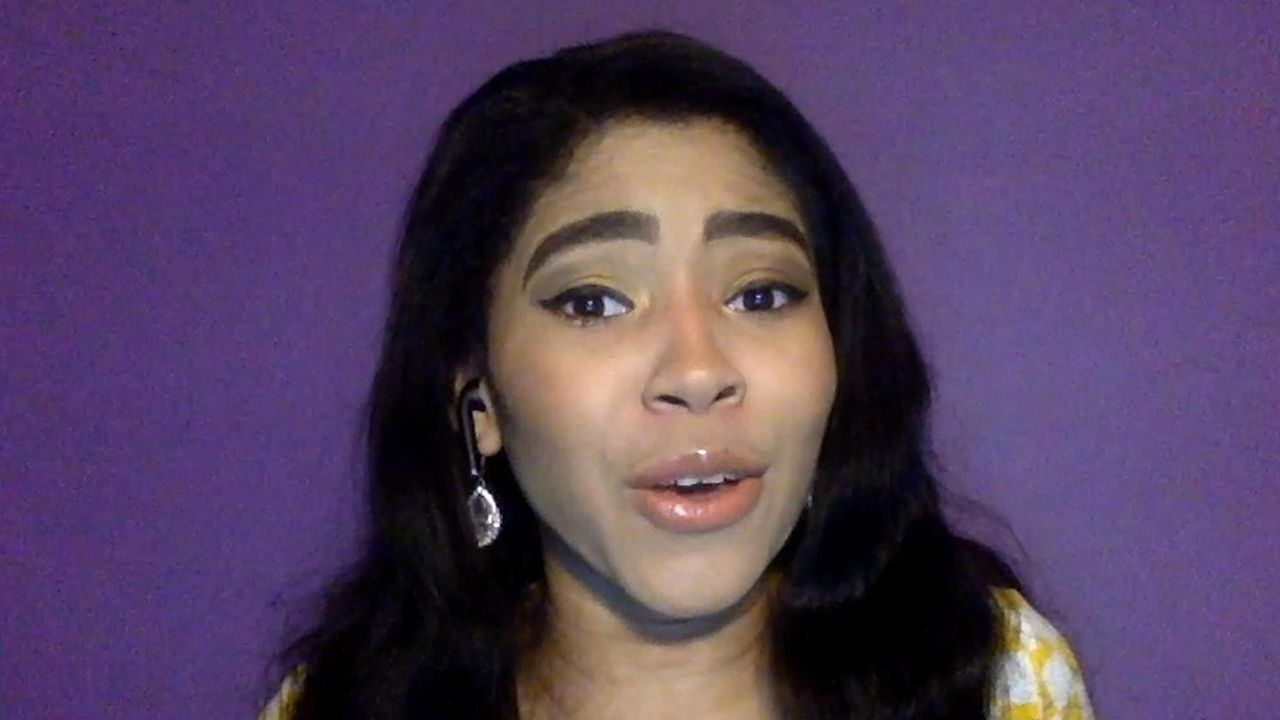 Members of the Uniondale show choir Rhythm of the Knight have been practicing biweekly on Zoom.  Credit: Uniondale High Choir

Twice a week, 17-year-old Lynette Perusier sets up her laptop in her bedroom in Uniondale, logs onto Zoom and tries to sing — and dance — in unison with dozens of other students. This is their new choir practice.

“It’s so delayed and there’s an echo!” Lynnette Carr-Hicks, 50, director of the renowned Uniondale High School show choir Rhythm of the Knight, says with a laugh. At the end of the 45-minute lesson, “I’ll tell them, ‘The bell rang and class is over. They’ll go, ‘No! No!’ “

Two months ago, Perusier was preparing with Carr-Hicks for what would be her first and last competition solo with the group. As a graduating senior, she’d finally worked up the courage to try out for a spotlight role in the choir’s performance of “Bring Me to Life” by Evanescence. Set for mid-March, plans to attend the Florida-based competition were canceled, much to the disappointment of Perusier and the choir’s other seniors.

“It’s so upsetting. When everything hit, they didn’t get to compete; they got nothing,” says Carr-Hicks.

The group still has a reason to keep practicing though. Shortly after starting their virtual lessons, the Uniondale show choir was tapped to perform on a nationally broadcast TV special, “Graduate Together: America Honors the High School Class of 2020,” airing May 16, at 8 p.m. on ABC, NBC, FOX and CBS.

“It’s something not many people will get the chance to do, so I’m really grateful for that,” says Perusier, who lives in Uniondale. “I’m a little shy, so I think it’s really cool that show choir is giving me this opportunity.”

The Uniondale show choir is used to the spotlight — a feature film about the group is in the works with California-based Amblin Partners, a production company led by Steven Spielberg. When schools across the country began switching to distance learning, a representative from the “Today” show called Carr-Hicks and requested the choir perform “Have a Little Faith” on a broadcast as a tribute to essential workers.

“It kept the kids really busy," she says. They recorded videos of themselves singing solo and sent them to Carr-Hicks for feedback until they got it right. "Then we got an email [about the graduation special] asking for the seniors to perform and they were so excited,” Carr-Hicks says. The seniors and a few juniors were asked to record videos of themselves singing the national anthem in graduation caps and gowns, which had to be donated by choir alumni and picked up and dropped off by Carr-Hicks. The previously recorded clips will air during the special.

“It’s been hard,” choir member Krystina Stevens, 17, of Uniondale says of being away from school and the choir. “I never would have thought anything like this would happen my senior year, but I’m blessed to be getting this opportunity.”

Being in high school, as senior Francesca Zamor, 17, puts it, “hasn’t been the easiest experience for a lot of us.”

While Carr-Hicks aims to lift her students’ spirits with such opportunities as the “Graduate Together” appearance, she acknowledges several in the group are juggling far more at home than they would be if in the classroom. “Some are doing good. Some are just not able to handle it. Some are getting into a depression mode. It’s really sad,” she says of the students that have formed “one big choir family.”

The group of nearly 40 students has found other ways to connect and support one another while maintaining their social distance. When member Nicole Smith-Constant's mom Dawne Marie Smith, 58, died April 16 after suffering a heart attack, Carr-Hicks and the group arranged a drive-by to show their support.

"The whole choir came by my house and made signs and posters. They gave me money to help pay for my mother's funeral expenses. It helped a lot," says Smith-Constant, 16, who currently lives in Uniondale with her father, brother and uncle.

“We lost a choir mom,” Carr-Hicks says, “and three of my young men lost their uncles and aunts to the virus. They went into a depression. I try to get them excited about singing again. I tell them, ‘You gotta sing! You’ll feel so much better.’ “

In lieu of in-person meetings and group venting “therapy” sessions, which choir members say typically happen in school, Carr-Hicks designates a portion of their Zoom practice for the group to talk about their days and what they’re going through. She’s also switched up her playlist to include songs with positive messages, like “Brighter Day,” by Kirk Franklin, and “Have a Little Faith,” by John Hiatt.

“She chooses songs where you have to actually listen to the lyrics and think about them,” says Stevens, who will attend Hampton University in the fall. “It teaches you it’s OK when things aren’t OK. Life will get better. In the end, you just have to look for the brighter day, you know?”

ON TV “Graduate Together: America Honors the High School Class of 2020,” featuring the Uniondale show choir, airs May 16, at 8 p.m. on ABC, NBC, FOX and CBS.