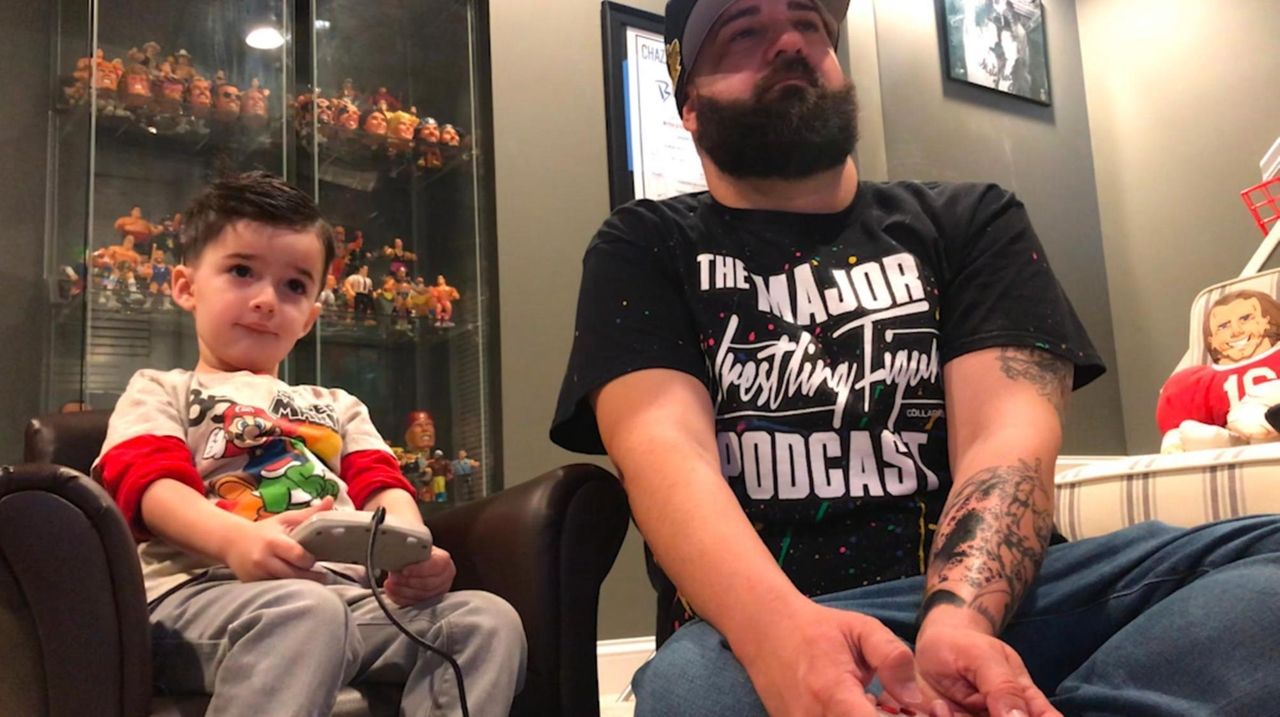 Robert and Gavin Maurus of East Patchogue talk about their love of vintage video games that they can play together. Credit: Bruce Gilbert

The apple doesn’t fall far from the tree, and the same goes for the Game Boy.

Ask Robert Maurus, 37, an East Patchogue process server whose love for playing games from his childhood Nintendo Entertainment System — "Ghostbusters," "Teenage Mutant Ninja Turtles," "WWF WrestleMania," and "Super Mario Bros.," among them — is as strong today as when he first played 32 years ago.

He’s in good company. His 3-year-old-son Gavin has become just as big a fan of the games that his dad discovered in the late 1980s.

"Gavin was playing ‘Ghostbusters’ the other day. The best part is that he blows into the games before he plays," says Maurus, whose collection of action figures, toys and games have a place of honor in his home office. "He saw me do it, and now he does it."

The Mauruses aren't alone in their experience. Long Island parents are finding their kids playing with games and toys they once knew when they were younger. One of the driving factors is nostalgia, and that everything old is new again. In addition, the pandemic has compelled people to look for stay-at-home fun.

For Gavin, whose favorites include "Mario" as well as "Sonic the Hedgehog," which Dad also played as a kid on another game system, getting his game on like Dad is a blast. "I like the colors," he says.

For Maurus, it pushes feel-good buttons. "It brings back memories," he says. "I get the joy of watching him play with the same game — sometimes the very same original one — I did. It’s definitely really cool."

And really popular, according to Long Island toy store operators. Tristan Whitworth runs Game On Video Games, which has locations in Smithtown and Miller Place. The name of the game at the shops is vintage — Atari, Sega Genesis, Nintendo NES, Game Boys — and business is humming along.

"It’s a huge trend. It’s pretty crazy," Whitworth says, adding that it "starts with the parents" looking to bridge time and share an experience.

He speaks from authority as a business owner and as a father of three, including son 5-year-old Rowan, and daughters 3-year-old Emma and 18-month-old Tessa. At age 36, Whitworth is smack in the middle of his typical customer profile. Shoppers typically range from their mid-20s to mid-40s.

Rowan, who’s been playing Dad’s games for 18 months, started with the dot-gobbling, ghost-dodging "Pac-Man." "It was super simple and it was in the house," says Whitworth.

Vintage game-playing has had some positive influence. "Over the last 12 months, we’ve really bonded over it," says Whitworth, adding that the hero-driven "The Legend of Zelda: A Link to the Past" has boosted his son’s reading skills.

Nostalgia has been a constant reason for growth, but the pandemic has pumped it up even more. "The trend has been growing and very big right now," says Jerry Barba, owner of Retro Games and Toys of LI in Levittown.

"It’s huge right now," adds Barba, whose store stocks a mix of old and new playthings. "We’re seeing younger customers — kids who are 6 to 15 — looking for the older systems and toys."

Brianne Wakefield, 34, a Bay Shore stay-at-home mother of four, has seen that too. Her 9-year-old son, Justus, gravitates to bygone games.

"My son loves old things, lots of old things. He loves ‘Teenage Mutant Ninja Turtles,’" says Wakefield, whose go-to game stores include Blast from the Past in Bay Shore. She grew up loving "Mario Kart" and "Donkey Kong."

In addition to video games like the ones his mom played, Justus' favorite toys are old school Ninja Turtle action figures from the late ’80s and early ‘90s. They include mighty monkey Sergeant Bananas, mole man Dirtbag and raucous reptile Leatherhead.

Justus likes that "they’re animals," he says, "and the way they move."

One reason why old games and toys are more popular than current ones is that they’re parent-tested, according to Wakefield. "The new ones are too vivid, too real and too violent," she says.

Games make lasting impressions. Maurus still remembers the thrill of getting "Super Mario Brothers 2" at age 6 as a reward for shoveling snow off the family driveway. Mitchell Roulston, 38, who own Hasttel Toys and Collectibles, a haven for action figures and comic books in Medford, vividly recalls devouring games like "Popeye" as a kid.

Besides games with the pudgy plumber Mario, who has inspired his bedroom décor, little Mitchell is also a big fan of the cartoony boxing game "Punch-Out!!" His reason why it’s a favorite explains these games’ enduring appeal. "It’s fun," he says.

His father agrees. "It’s weird. I see so much of me in him," says Roulston. "It was so organic. He’s a mini-me almost."