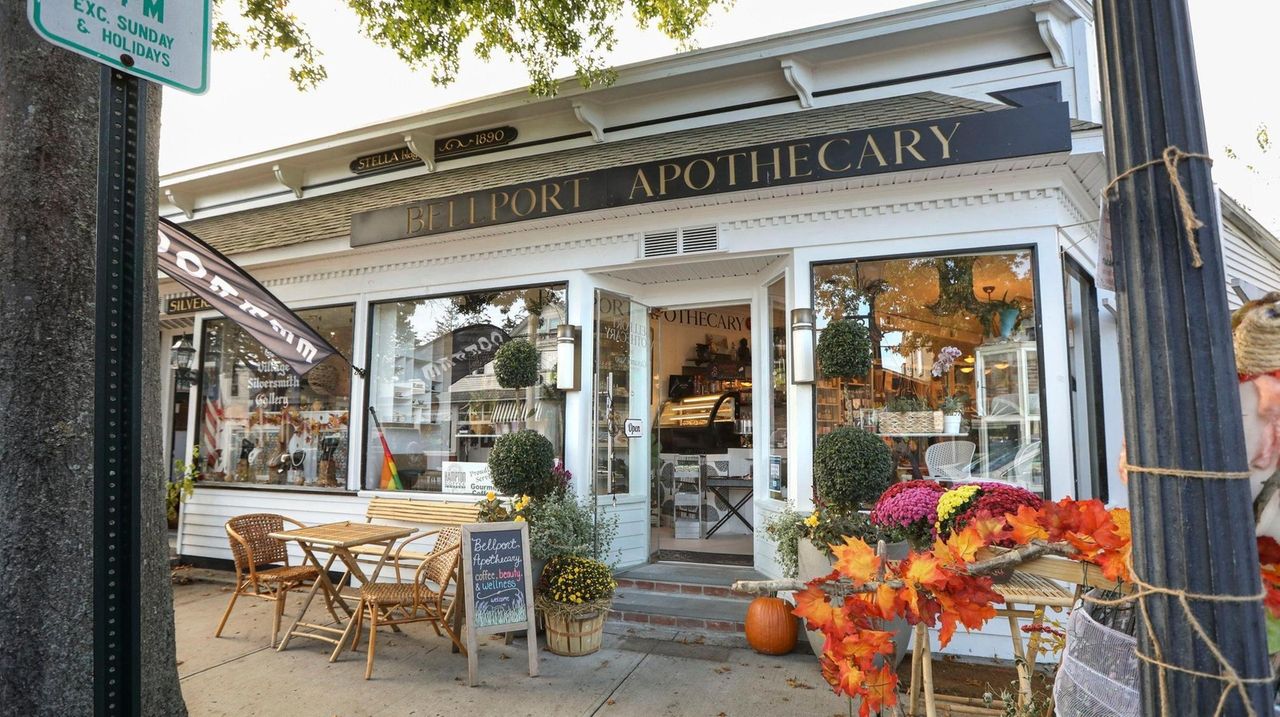 In the photo: Giovanni Naso says he was inspired to open Bellport Apothecary after binge-watching the T.V. show, "Schitt's Creek." In the video: Co-owners of Amityville Apothecary spoke about the inspiration behind leaving their corporate jobs to open their dream business.  Credit: Howard Schnapp

A trip to a pharmacy during a weekend when his young son was stung by a bee convinced Brian Zone it was time for history to repeat itself.

His son had been stung by bees before and was prone to infection, but Zone was unable to find his son’s antibiotic in stock. Zone says he was stung by the experience, so with a background in pharmaceutical sales he decided to open Long Island Apothecary in his hometown of Commack.

"I learned from my grandfather that the customer always comes first," Zone, a Commack resident, says. "I looked at different names and ‘apothecary’ came up — I was trying to get back to the old-school way of doing things, but with new technology like computers and text messaging."

Zone is among a growing number of Long Islanders who are bringing back apothecary shops and giving them a modern spin.

Started as storehouses where owners stocked and disbursed herbs and spices and later began preparing medicines for doctors, the first one was opened in Baghdad in 754 A.D. by scientist Jaber Ibn Hayyan, the founder of chemistry science. Until recently, the word "apothecary" was considered archaic after people who manufactured and dispensed medicines became known as pharmacists who worked in drugstores or pharmacies instead of apothecaries.

But Zone and others say that what was old has become the new big thing, with the pandemic leading to an increased focus on wellness and more and more stores popping up that offer natural alternatives to traditional medicines and personalized service. They add the television series, "Schitt’s Creek," which has as one of its main "characters" Rose Apothecary, has also fueled interest throughout the country in these businesses.

Zone plans to open a second apothecary in mid-November in Merrick, and notes that while you can get a prescription filled at his shops, they’re "a mix between a pharmacy and a skin care" store.

Bay Rose, a Bluepoint resident who owns the Nettle + Rose apothecary shop in West Sayville, says that, increasingly, people are "going natural and getting connected to the earth instead of taking the traditional route" when they have health concerns.

One of her customers, Deidre Nesteruk, who lives in St. James and Malibu, California, likened Rose to a modern day "medicine woman" and says, "We need more spaces that provide this type of medicinal healing."

Here’s a look at Bay Rose’s store and some other Long Island apothecaries that don’t fill prescriptions but offer lots for what might ail you, ranging from herbal remedies to mystical crystals:

Located in an adorable space painted pink and white on the exterior, this shop opened in 2019 and caters to women’s needs with offerings in the apothecary, beauty and natural living categories. Included are products touted to ease menstruation and menopause. "My Breast Friend," is an herbal breast care balm that the store’s website says can be used for helping to keep breasts healthy.

"I can’t give medical advice," owner Bay Rose and other apothecary owners who don’t sell traditional medicines say. But she says claims made about her products are based on what "studies have shown or from my own personal experience … trial and error in my own health journey." You’ll also find such treats at her shop as lemonade, herbal lattes and vegan ice cream.

Co-owners Dina Rosenberg and Danielle Martin opened the store in 2018, and Rosenberg says she had to Google the word, "apothecary" to find out that it was "basically an old-fashioned pharmacy." Martin refers to the store’s tagline in saying it sells "remedies for the mind, body and soul." Personalized care packages can be made to include items like candles, crystals and oils.

One of their customers, Carol Lea Pike, 65, became so hooked during the pandemic lockdown on the shop’s Friday night live Instagram sales that she made a special trip to Long Island just to visit the shop and take its three-day crystals healing class. Her house is filled with crystals from the store and she says some help with anxiety she experiences in her job as a prop assistant for television shows.

The idea for this store came straight from "Schitt’s Creek." Owner Giovanni Naso was binge-watching the show and decided to open an apothecary to help pay the bills when the pandemic stalled his interior design business.

"Many episodes into the show they got to Rose Apothecary and it was like a message from the universe, ‘You’ve got to do this,’" Naso, of Bellport, says. For him, it was what the doctor ordered in more ways than one. "I love interacting with people. People come in that don’t know about ‘Schitt’s Creek, or don’t know about an apothecary or can’t pronounce it, and we talk. I let them know I’m not selling RX; I sell things like scrubs for your face and body."