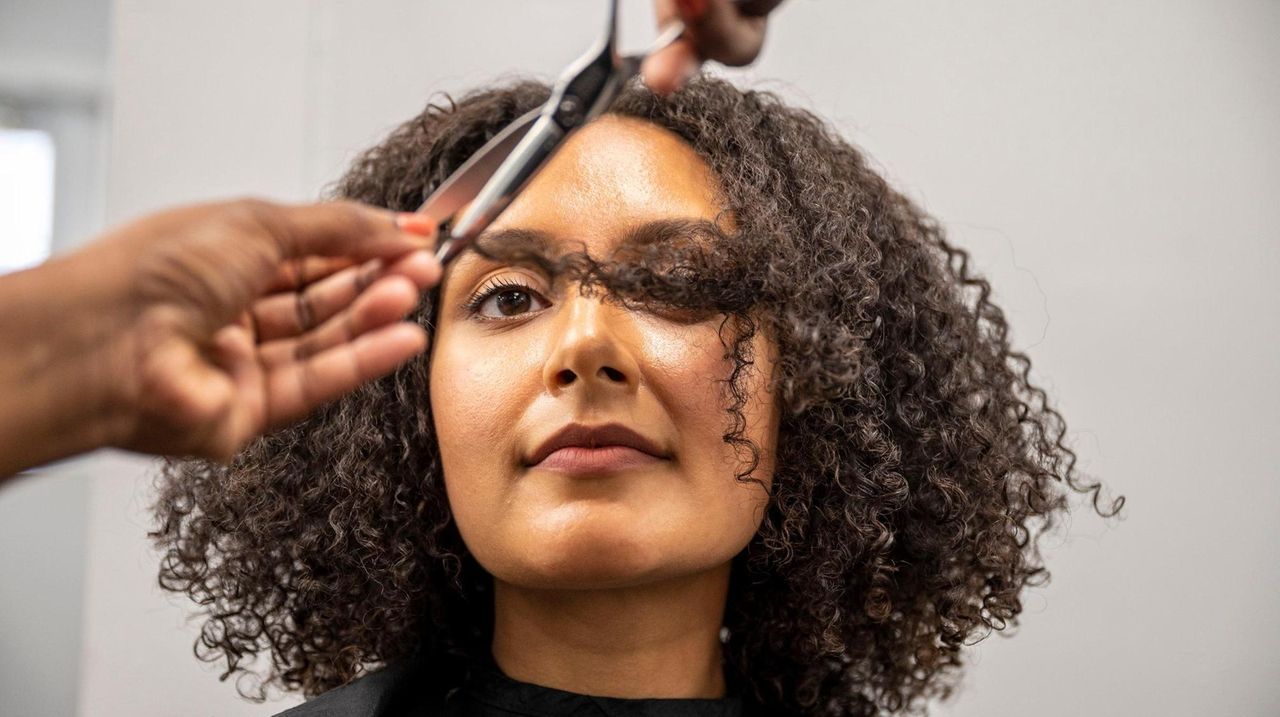 Caring for your curls: Tik Tok has made rejuvenating your curls a trend. Elizabeth Rabanal, of the Curly Culture Salon, is a veteran hairstylist who has focused on curly hair for the last six years, calling it her first love. She'll be doing a long cut on client Sarah Kahlil at her current location.  Credit: Newsday / Alejandra Villa- Loarca

The appreciation and embrace of curly hair — ringlets, spirals, corkscrews, waves, coils — is growing as folks of all ages and backgrounds are relishing their natural hair instead of trying to tame it.

"It’s a big trend," says Dana Persico, the CEO and executive director of education at the Long Island Nail, Skin and Hair Institute in Levittown. "The ideal that people once saw in magazines, on TV and even with supermodels was that hair should be smooth, straight and neat. For people with curls, well, you didn’t look like that — your hair was the exact opposite. Today, it’s much more about being your best self and authenticity is in," she says.

In fact, giving up on what some describe as a "fight" with their curls, and giving way to acceptance and a new found pride in tresses that have a tendency to do their own thing is more than a moment in the ever-changing world of hair. It’s a movement across Long Island and the nation.

For Mary Wilson, 33, a television producer from Bay Shore, it wasn’t until she was a junior in college that it dawned on her that she didn’t have to straighten her "intensely curled African American hair." She describes that feeling as a "light bulb moment."

"At some point, as a Black girl, like when you're nine or 10, it’s almost like a rite of passage to get your hair relaxed which kills the curl pattern. But I thought, this is the hair that comes out of my head naturally and I’m going to let my free spirit ride. Part of it was curly, part was straight so I cut it all off into this little Afro. It was kind of shocking but I just got tired of having to change my natural hair to meet some kind of invisible standard," says Wilson.

"When you start embracing your hair, it’s a big step towards loving yourself."

Today, Wilson, who gets most of her haircare tips from YouTube, says she's very protective of her curls.

Similarly, Felicity Masone, 22, a graduate student at Adelphi from Port Jefferson, recently liberated her curls. "In middle school, I did get bullied for my natural hair and I hated it," says Masone, who often wore it back in a pony tail to tamp it down. "I damaged it so much when I was younger, thinning it and straightening it."

Now says Masone, "I know how to take care of it with Jamaican black castor oil, coconut oil and vitamin E. My curls are popping and my mom loves it, my boyfriend loves it and I love it too. It’s an appreciation of yourself."

But bottom line, while curly hair may be natural — it’s not always easy. For some less skilled than Wilson or Masone, it requires expert cuts and care to bring it back to a healthy and beautiful state after years of abuse and to keep it that way.

At Curl Evolution, a 15-year-old curl-centric salon in Babylon that draws folks from all over Long Island and even from out of state, there’s now a wait list for haircuts by one of 10 curly hair stylists.

A first cut there runs $165 and follow ups cost $70. Why the price difference? "We found that originally when we did cuts and styling alone, clients weren’t hydrating curls enough with a good, deep treatment for the curls to look their best," says Alison Bridges, the shop owner. So, they added a bit more to the initial visit which includes, "a dry cut for your curl pattern, a lesson on styling, a deep treatment, a micro fiber towel, and a care guide to take home." The process takes anywhere from 90 to 120 minutes.

"People tell me they’ve had a lot of bad haircuts and hair trauma, that their hair is always a frizz ball and they hate it."

Some of her clients worry that their natural hair is inappropriate for the workplace. "There’s such a stigma. My job is to show them that their hair is beautiful and my goal is to show that you can look professional with your natural hair. I believe we’re getting to the point of not being tied down to a straightening iron. We’re letting ourselves be who we are."

It took decades for fitness, style and beauty influencer, Christine Mayoral, 52, (@fitfunfiftystyle) of Merrick to champion her curly mane. "For 35 years of my life, I fought my curly hair," she says. "I just wanted my hair to look like everybody else’s — long and straight. I had it relaxed, used all kinds of straightening products and flat irons, and finally I was sick of it. I thought, ‘let me do this curly thing.’ "

Now says Mayoral, people regularly compliment her 'do and she’s even presented curly tutorials on Instagram.

"It’s not easier," she says of her haircare regime. "But I feel like it’s more me."

One curly hair guru, Elizabeth Rabanal, of Curly Culture Salon, who just opened a new space in Glen Cove, is on a mission she says, "to motivate black women to love their hair."

Aside from her own business Instagram, she has created a separate page, @curlyandthriving to support those looking to embrace their curls which has more than 30,000 followers.

"Cutting curly hair is my first love," says Rabanal, who charges $100 for above the shoulder cuts, and $130 for longer ones. She’s adapted and updated some well-known curly cutting techniques, creating her own specialized cut, and urges clients to avoid chemicals, opting instead for healthier products.

"People do get upset with their hair and are looking for someone to understand it," she says. "We’re all born with our own beautiful hair, and I want to make sure they know what their hair can do for them."

Haircuts here include a consultation (important, she says) a dry cut, a shampoo and conditioning treatment ("to make hair shiny and curls bounce"), and a re-cut if necessary.

"There’s been a shift when it comes to hair in the Black community," Rabanal says. "When you start embracing your hair, it’s a big step toward loving yourself."

—Terry, terry, quite contrary: Never use a terry cloth towel to dry your hair — it adds to the frizz factor, dries out your hair and can worsen split ends and cause additional damage. Salons such as Curl Evolution in Babylon give first-time clients a microfiber towel, which are recommended, but many YouTubers and folks on TikTok espouse the use of a soft cotton T-shirt which they say works just as well.

— Hands off: “Don’t touch your hair,” says Dana Persico, the CEO and executive director of education at the Long Island Nail, Skin and Hair Institute in Levittown. “The less you do, the nicer the natural curl presents itself.” Generally, contact with almost anything (hands, hairbrushes, etc.) puts you at risk for the dreaded frizz and tangling. So, leave your curls alone. Angela Villaquiran, a senior stylist at Curl Evolution, agrees. “Don’t mess with it during the drying phase. If you touch it too much you’ll break up each curl.”

— The key word: Porosity. Loosely defined, it’s the hair’s ability to absorb and retain moisture, and because curly hair is dry in varying degrees, moisturizing is very important but it all depends on what the hair needs. There are three main types of porosity — low, medium and high and these will determine what and how much oil, conditioner or gel you should use. How to judge? There’s the water test, where you take one strand of hair and place it in a glass of water. Hair with low porosity will remain floating on top, medium will hover somewhere in the middle and high will sink to the bottom. “A lot of people have mixed hair,” notes Villaquiran so accuracy isn’t assured. But at least it’s a starting point and you can take product advice from your stylist or various sites online.