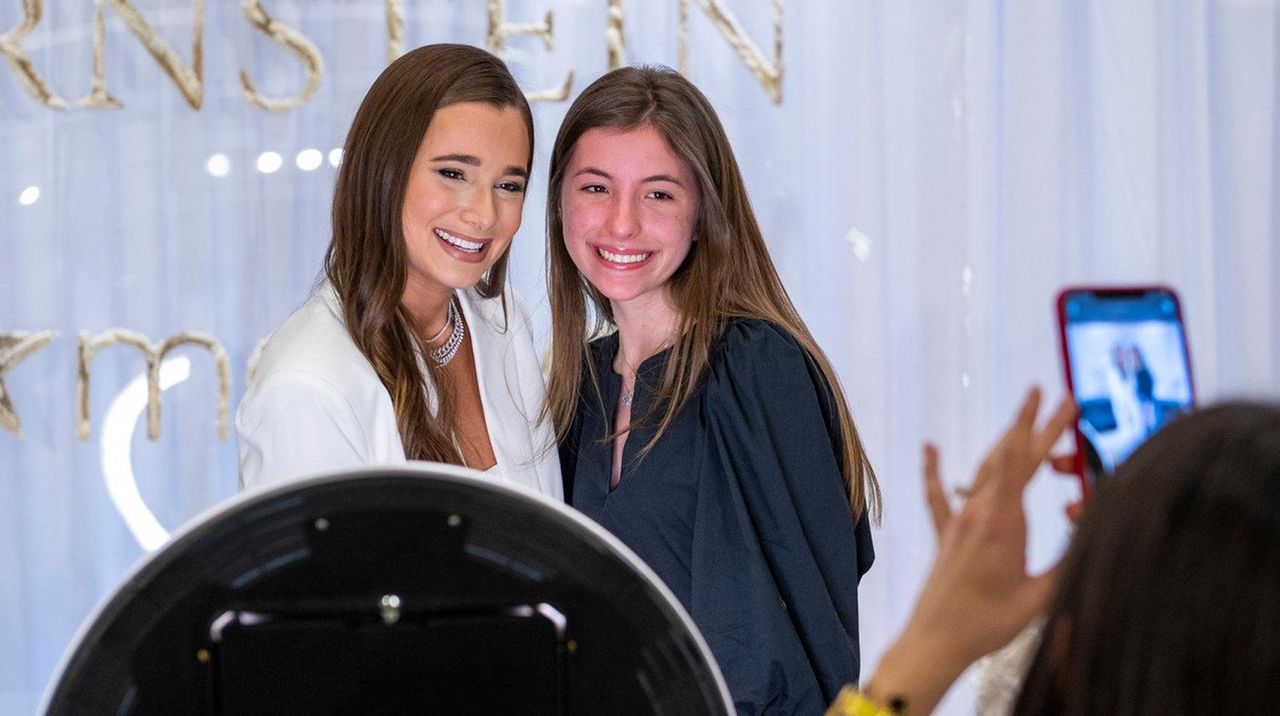 Great Neck native Danielle Bernstein, a fashion influencer and the founder of the blog, WeWoreWhat, debuted her clothing line on March 5 at Macy's in Herald Square. Credit: Corey Sipkin; Danielle Bernstein for Macy's

A decade ago, Great Neck South high schooler Danielle Bernstein bolted out after school to hit up Macy’s, where she says she’d "scour" for the newest items. Now, Bernstein, a fashion influencer and the founder of the blog, WeWoreWhat, has her very own eponymous brand exclusively at her old stomping grounds. “Danielle Bernstein for Macy’s is my ode to my childhood self, it’s a way to bring my brand to the masses and pay tribute to the girl I was before WeWoreWhat,” the 27-year-old says.

On a recent Thursday night, more than 500 loyal followers of the fashion blogger/influencer/maven lined up at Macy’s Herald Square to meet her and get a first look at the new 22-piece, sizes 00-24, ready-to-wear collection, each design priced under $100. By night’s end, the racks were almost bare, with women of all ages clutching their merchandise as if it were gold.

The new brand is a byproduct of her WeWoreWhat blog where Bernstein broadcasts a carefully curated look at her own life.

That care was evident pre-meet-and-greet when Bernstein breezed into a private suite at Macy’s with an entourage that included a makeup artist whose job appeared to be as minder for a rogue strand of hair, and an angelic woman in a baby doll dress from the collection who opined on how the light hit the influencer. Bernstein herself, slim, tall and glowing (maybe it was the light) wore a white flowy ensemble from the collection (pants, blazer and crop top).

The influencer expertly lived up to her mission of meeting the masses – hugging, (much to the chagrin of her mom, Andrea Seigel of Roslyn … coronavirus concerns and all), taking selfies and chatting with hundreds of women. “We love Danielle,” said Sydney Cano, 24, of Franklin Square who was shopping with a bestie from New Jersey and waiting for an item – already gone – to be restocked. “We’re so excited to get a look like hers, it’s all basic but essential fashion,” said Cano who expected to spend around $250 on several items including a cute puff-sleeved cropped jacket and a blousy bodysuit.

All this is a l-o-n-g way from when Bernstein transferred back from the University of Wisconsin-Madison to the Fashion Institute of Technology and started WeWoreWhat. She says, “I was a street-style photographer and sharing all the amazing style I was seeing in New York with the girls at Wisconsin and the other big 10 schools to give them outfit inspiration.” About a year in, she dropped out of school and turned the camera on herself. What started as a hobby morphed into a lucrative business. Today, a single Instagram post on WeWoreWhat can command $15,000 according to Forbes, where she is on their "30 Under 30" list.

Perhaps the key to the apparent success of the Bernstein partnership with Macy’s is the influencer’s laser focus on design and fit -- from 00 to plus. It’s also not her first foray into fashion design. She has launched a successful, somewhat higher-priced line of bathing suits and jumpsuits available on the WeWoreWhat e-commerce site.

So, what’s next? The summer drop for Macy’s, the second of four, is coming in June. Shhh, there’s a big, secret “reveal” on the horizon -- no one’s talking about it now. Then there’s a book, “This Is Not A Fashion Story: Taking Chances, Breaking Rules, And Being A Boss In The Big City,” ($17.99, Nextone Incorporated) billed as “a down and dirty tale of how a Long Island-born teenager became one of the most recognizable names in fashion.” It’s on pre-order at Amazon.com now and due out in May.

Rarely does Bernstein takes a breather. “I did for a minute yesterday – I had a momentary ‘wow,’ and then went back to work,” she said. As for the connection with Macy’s and growing up on Long Island, she’s nostalgic. “Macy’s in Manhasset was my go-to ... I loved it there. I mean, I loved going and looking at stuff at the Americana too. But then I couldn’t afford it … now I can.”