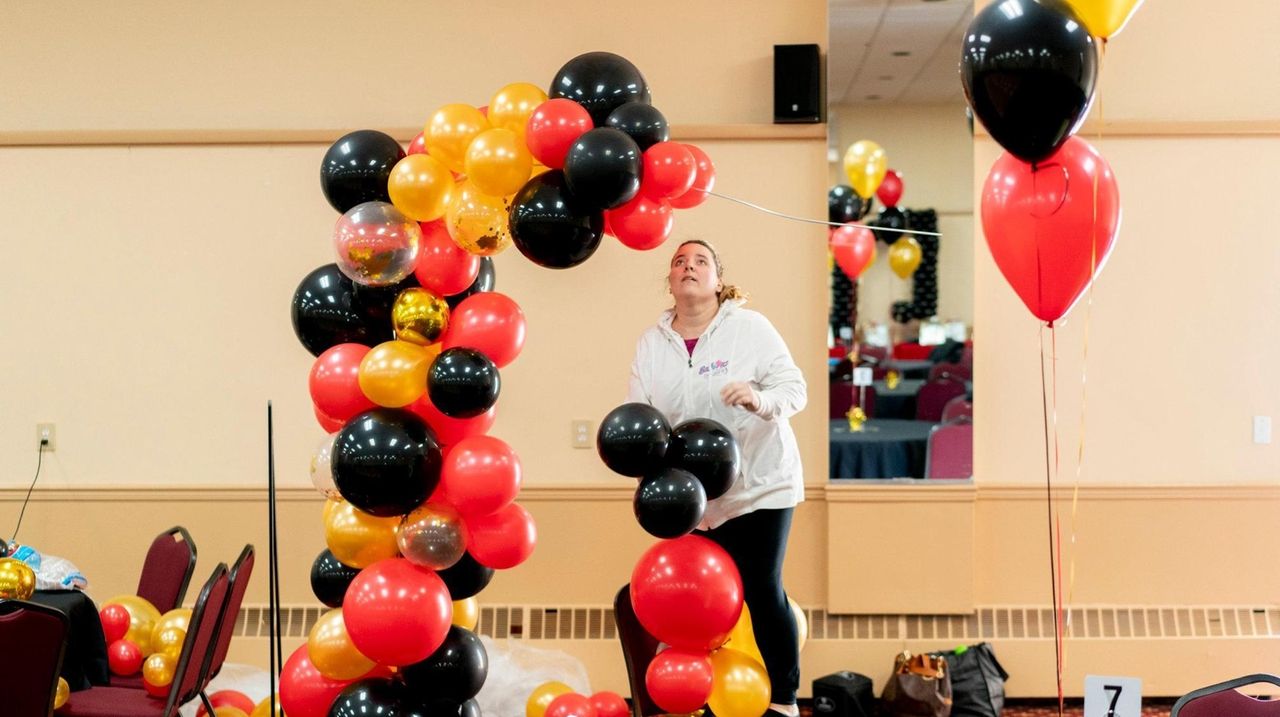 Balloons by Laurie designs and creates huge balloon displays for parties and other events on Long Island. On Thursday, Jan. 30, owner Laurie Ferrara set up a 5-foot music note display at the American Legion Post 1066 in Massapequa for a party held by Seaford High School.  Credit: Johnny Milano

When her nephew, James, turned 18 in January, Megan Weilert supersized the celebration. She surprised the high school senior with a traffic-stopping birthday greeting stretching more than 20 feet across the front yard of his Malverne home.

“I’m the crazy aunt. I wanted to do something special,” says Weilert, 44, a Bayville office manager who’d used her own ingenuity to toilet paper James’ house for his 10th birthday. This year, she called upon Sign Gypsies Long Island, specialists in plus size corrugated plastic placards, to make the milestone one for the ages.

“It was a hit,” she says. “It’s a party on the lawn. Signs are so fun.” And so popular now on Long Island, according to party planners who say that eye-popping balloon creations (blowups for blowouts) and doughnut walls that look — and are — good enough to eat are two more hot ways to party in style.

Credit social media, word-of-mouth and the fact they’re all designed to turn heads.

“Big statements are on trend,” says Laurie Ferrara, owner of Balloons by Laurie, whose inflatables run the gamut from centerpieces to sculptures. Seven years after launching her home-based business in Seaford, orders have blown up. “Pinterest has made balloons more elegant, more fun and packed with more pizzazz,” she says. “And they’re Instagram-ready.” Party packages typically start at $250.

Consider, for your next luau, a 4-foot-tall pineapple made from dozens of balloons. Or a Chinese dragon arch measuring 9 feet tall by 25 feet long, made up of about 300 orange, yellow and black balloons. Ferrara, 44, created such a balloon beast for a bar mitzvah in Jericho. In January, she turned 160 black air-filled balloons into a towering music note for a PTSA fundraiser for Seaford Middle and High Schools.

“The music note was huge — and a huge success,” says Lisa Garcia, 45, a fundraiser co-chair who works for a wellness company. The balloon sculpture showcased the grand prize raffle tickets table. “Balloons are just so festive,” she says.

Ditto doughnut walls, which have an added bonus of being delicious.

Ask Risa Fier, a nanny who lives in Farmingdale. She ordered a pegged pastry wall and 10 dozen doughnuts from LMNO Party Planning for her fiance’s 50th birthday celebration in Massapequa. “I’m the type of person who likes to think outside the box for my parties,” says Fier, 45, adding that her fiance, Brian, is still talking about the Reese’s Pieces chocolate and peanut butter doughnuts.

Fier also included a bacon bar, an emerging trend, dreamed up by Brian Von Der Linn, owner of Liberty Links in Freeport. His spreads feature such savory eats as bacon rosettes, bacon lollipops and bacon dusted with sugar the 37-year-old butcher candies by “hitting it with a blow torch” while guests watch. “Everybody loves bacon — and a show,” he says. Prices run about $12.50 a person.

At Megan Leeb’s Winter ONEderland-themed bash this month for 60 friends and family members at the Lindenhurst Pavilion for her daughter Everleigh’s first birthday, seven dozen vanilla-flavored doughnuts iced in snowy white and icy blue frosting melted hearts. “All of our guests loved it and couldn’t stop talking about how creative and beautiful the wall was. We gave Everleigh a taste and she did not want to let go,” says Leeb, 29, who lives in Amityville and works in compliance. She got the idea after seeing one at a Long Island fundraiser.

“Every year or two there’s a new trend. Doughnut walls are huge right now,” says Nicole Rosales, 31, co-owner of Babylon-based LMNO. The wall rental is $100. LMNO doughnuts start at $20 a dozen. “We rented out our first wall in July 2019,” she adds, “and have rented it almost every weekend since.”

Oh, baby, outdoor birth announcement signs are also going strong. That’s what Island Lawn Expressions, in Port Jefferson, is all about. “Moms and dads are so excited and proud,” says Sean Fitzsimmons, 54, owner of the 17-year-old company who says business keeps  building. “Parents want everyone to know.” A typical sign rental costs $119.99 and stays up for a week.

Theresa Re, 46, who lives in Bethpage and co-launched Sign Gypsies LI in 2017, has seen dramatic growth at the Glen Cove-based company. Now they average about 10 signs a week, twice as many as when they began. Signs start at $99. And set to launch in April: illuminated signs.

Jackie Spiro, a team leader at Liberty Travel who lives in Amityville, surprised her daughter Molly with a Sweet 16 yard sign from Sign Gypsies LI this month. “Teenagers love taking pictures,” she says, “and these signs are perfect for the perfect photo-op.”

And Spiro’s sign got plenty of applause on Facebook. “So awesome,” one wrote, while another shared that she had one “for my 70th birthday.” Another post helps explain how party themes turn trendy, noting, “I’m totally copying you.”

Play games at a pinball arcade, more things to do this weekend on LI
1:29
Cuomo announces new guidelines for museums, movie theaters, more
Small banquet halls now eligible for grants
LI drive-in movie schedule for the spring and summer
1:26
Explore field of 500,000 tulips at LI farm
1:26
Explore a field of 500,000 tulips at LI farm this weekend
Didn’t find what you were looking for?