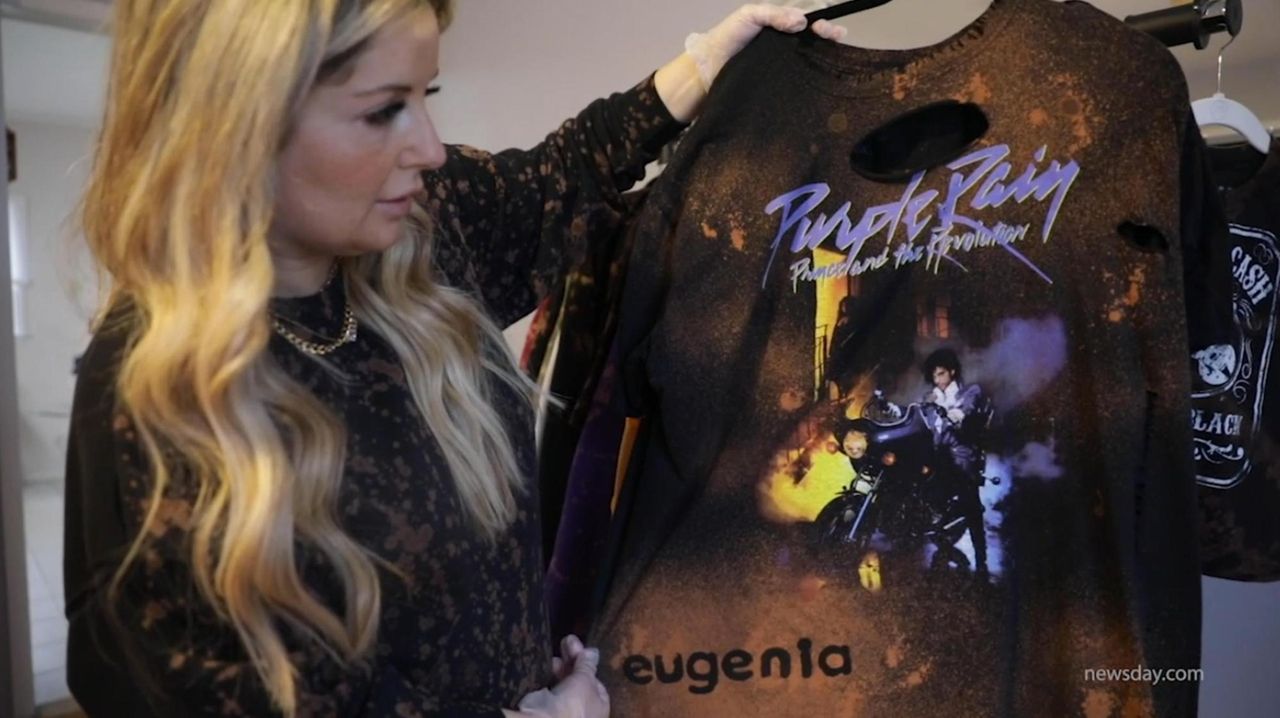 Eugenia Fundo, of Cedahurst, created a successful T-shirt business while she was home during the pandemic. She shows us how to distress clothes with bleach at home.  Credit: Newsday / Reece Williams

Cedarhurst resident Eugenia Fundo describes her community as so tight-knit that when someone has something new or cool, everyone else there wants it. And she says that was the case when she and her four-year-old son were among those wearing the latest must-have around town — bleached distressed clothes.

"We had matching sweatshirts and everyone would ask where I got them," Fundo, 31, says. "I got a bit of a following on Instagram and started selling them."

In Cedarhurst and beyond, bleached distressed looks are everywhere lately for teens, kids and adults — ranging from band logo, thrifted and vintage shirts to sweat and track suits. It’s all part of the most modern version of the tattered clothing trend that includes tie-dye, ‘80s-inspired bleached jeans and other pieces made to look worn. But it’s tie dye’s bleached cousin that’s the newest star on Instagram and Tik Tok — offering a respite from the saturation of tie-dye, but still similar in appearance.

"It’s a trend," Ariana LaConte, owner of Lulu’s women’s clothing store in Bellmore, says of bleach distressed fashions. "No two pieces come out the same and it’s not like wearing a plain shirt or a solid shirt." The 26-year-old Melville resident sells bleach distressed clothes in her shop but she’s also a DIYer. "I started with tie-dye."

Fundo says she became a bleach distressed DIYer after she stopped working her retail job when the pandemic hit, and learning bleach distressing meant she didn’t have to stress about losing her paycheck. She does a lot of rocker tees. "I do The Rolling Stones, Bon Jovi, Guns N’ Roses AC/DC … anything people ask for," Fundo says. "I call my style a high-end grunge look. I wanted to make something cool and trendy that people would want to follow." Her business is named Bleach Bum. She adds, "This is easier than tie dye — you don’t need color; you only need bleach."

Gabrielle Banschick, 28, of Great Neck, is the owner of Penelope, a women’s clothing store in Woodbury that features ‘60s and ‘70s-inspired fashions. She personally makes some of the bleached distressed pieces sold at her shop, which include rocker T-shirts, tube tops, flannel shirts, denim jackets and sweatpants. She says she believes bleached distressing became a trend when people began looking beyond tie-dye but not too far.

"I think people were getting a little tired of tie-dye," Banschick says, adding that once winter arrived some wanted to turn away from the typically louder colors of tie-dye to something more subdued for colder weather like black, which is popular for bleaching. "It’s edgier, not as juvenile, and you don’t look like you’re at sleep away camp."

ONE OF A KIND

Karrie Anne Vitti, owner of the Let’s Craft "gym for crafters" in Westbury, is planning to offer classes in bleach distressing when the weather gets warmer so it can be done outdoors. Her other workshops will show how to make cuts in bleached distressed pieces and how to apply designs. Participants will have the option of bringing in their own pieces to work on or they can pre-order shirts, pants and sweatshirts for the workshops through her. "It’s like a paint and sip," she says.

Vitti adds her 16-year-old daughter, Kaitlyn, and other teens are huge fans of bleach distressed clothes.

"I have a few oversized T-shirts and sweatshirts," says Kaitlyn Vitti, of North Bellmore. She notes she likes bleached distressed looks because less is more. "I personally like more neutral colors and bleach dyes aren’t as loud as tie dyes and aren’t as crazy."

Kaitlyn Vitti’s friend, Lauren Andruzzi of Bethpage, also 16, does both tie dyeing and bleach distressing at home to follow trends. "I see it on social media a lot. I just think it’s a really cool and unique thing — all my friends are doing it."

HOW TO BLEACH DISTRESS

1. Prepare your bleaching area. It is recommended you do this outside on a warm, sunny day. Get the best results from dying your pieces outside where warmth and sun can affect the intensity of color in the finished piece. You will need garbage bags, gloves, a spray bottle or squeeze bottle, bleach, water, peroxide, a bucket, and optional rubber bands, and the clothing you would like to bleach.

2. Take a dry colored or black piece of clothing and prepare it for the bleaching process. Depending on the look you are trying to achieve, you can either scrunch/twist the clothing and bind it with rubber bands, leave it loosely scrunched up, lay it flat or put a piece of cardboard between the front and back of the shirt so you can control the bleach one side at a time.

3. Put gloves on and prepare the bleach solution by using equal parts bleach and water. Put the mixture into a spray bottle or squeeze bottle depending on the look you are trying to achieve.

4. Spray/squeeze the bleach on the clothing and leave it in the sun to bleach. Check it every 10 minutes to see when it reaches your desired effect. The amount of time needed will vary depending on the weather and the amount of direct sunlight. Keep a close eye on the clothing, if the fabric is very thin and bleach is on it too long it could cause small holes.

5. Place the clothing into a peroxide mixture and let them soak for at least 20 minutes to neutralize the bleach. To create the mixture, use one gallon of water and one cup peroxide.

6. Wash and dry the items in a washing machine.

7. If you did not achieve your desired look repeat these steps and add additional bleach.

1:26
Explore field of 500,000 tulips at LI farm
Visit Adventureland, more things to do this weekend on LI
Holbrook brewery teams with musicians to raise suicide awareness
Try something new: Recent LI restaurant openings
LI drive-in movie schedule for the spring and summer
3 new Long Island ice cream shops you need to try
Didn’t find what you were looking for?