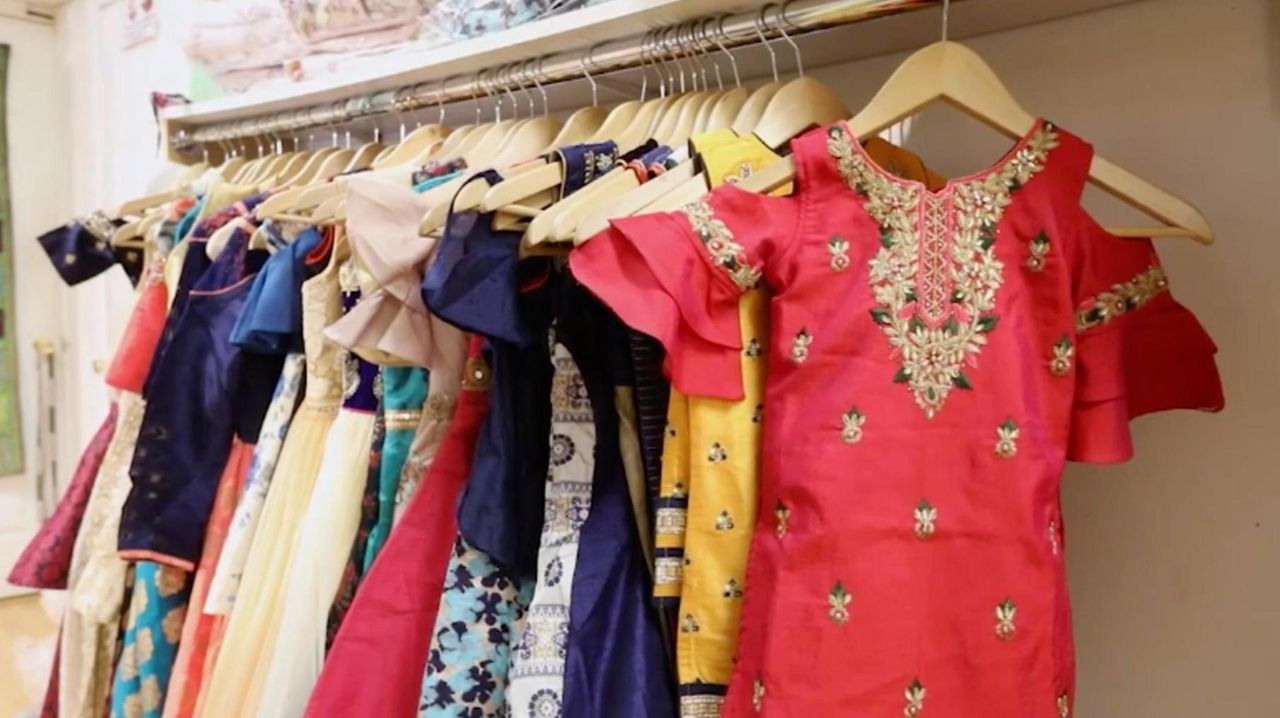 On Oct. 19, two proprietors of Hicksville Indian fashion stores spoke about what makes their businesses thrive: the personal attention they give to customers. A growing number of people of various ethnicities come from far and near to shop for Indian fashions in Hicksville, the hub for high-end traditional, formal Indian fashions. Credit: Marisol Diaz-Gordon

When Abijith Varughese, 28, of Kerala, India, started shopping for his wedding outfit, he knew just where to begin — Hicksville.

“We’re visiting from India — we heard about this store from our friends in Islandia who said they have better clothes than in India,” explains Varughese’s mother, Laila Anish, as her son tried on sherwani suits, traditional men’s groomwear, at Samaira Man on South Broadway for his wedding next July.

Varughese is among a growing number of people of various backgrounds and ethnicities who come from far and near to shop for Indian fashions in Hicksville, where there are more Indian clothing stores than anywhere on Long Island, according to local business and fashion authorities.

And Hicksville has become the hub for high-end traditional formal fashions and those given a modern or designer spin, such as clothing seen in Bollywood movies.

“Bollywood for us is high fashion,” and it drives all Indian clothing trends, says Ronie Singh, 26, of Dix Hills. Singh’s father owns Samaira Man and the women’s clothing shop, Samaira. Both stores feature wedding apparel and accessories, and are on South Broadway in an area lined with these Indian shops.

Poonam Jain, 58, owns Vastra Inc.  in Hicksville, where Indian attire is sold and rented out to customers who don’t want to spend thousands of dollars to wear a piece just once. She says hers was only one of two Indian fashion stores in the hamlet when she opened in 1997 and now there are nearly 20.

“I get Bangladeshi, Pakistani, African-American, white and Hispanic [clientele],” Jain says. She says interest in buying Bollywood-inspired Indian fashions in America has grown because of the increasing number of people marrying into Indian families and Indians marrying into other cultures.

Sonal Shah, of Manhattan,  42, has been an Indian wedding planner for 15 years. She says a lot of her clients have purchased their wedding attire or formal outfits in Hicksville for the nuptials or as guests at the wedding reception, and that there is no place on Long island with as many Indian fashion stores.

“You don’t have to go all the way to India to get the clothes,” Shah says.

While Singh and others say that many younger and older Indians have gotten away from wearing traditional Indian clothing on an everyday basis in favor of more westernized and casual fashions, when it comes to a wedding, holiday or another special occasion they want to get dressed up, get the best, and not be outdone.

It can even be difficult for a bride to make sure she’s the standout at her wedding, Singh says. Getting Indian designer and custom fashions are now a must for parties and celebrations.

Party clothes and formal wear such as saris, lehenga cholis, anarkali suits for women and men’s sherwani suits at the Hicksville stores range in price from $100 to $5,000 or more. Womenswear rental, at Vastras, for instance, can range from $50 to $500 a week.

The stores in Hicksville that carry formalwear can feature designers such as Sabyasachi Mukherjee , who describes his collections as “an international styling with an Indian soul.” He has designed costumes for Bollywood films, actresses Renée Zellweger and Reese Witherspoon have worn his label, and his Autumn/Winter 2015 collection at Amazon India Couture Fashion Week was a collaboration with Christian Louboutin.

But in many cases customers go into the shops requesting something custom. Because the fashions at these shops are made in India but sold in Hicksville, sketches of custom requests go back and forth via computer between the Hicksville stores and their designer teams in India that make the garments.

At Aainaa , also on South Broadway, Parmeet Singh, 31, of Levittown, helps run the family business and he says that more than half the styles there are his own designs.

Singh says he sees only growth in the Indian fashion business in Hicksville in the future because the styles  appeal to so many other groups.

“If it were only Indians buying we couldn’t stay in business,” Singh says.