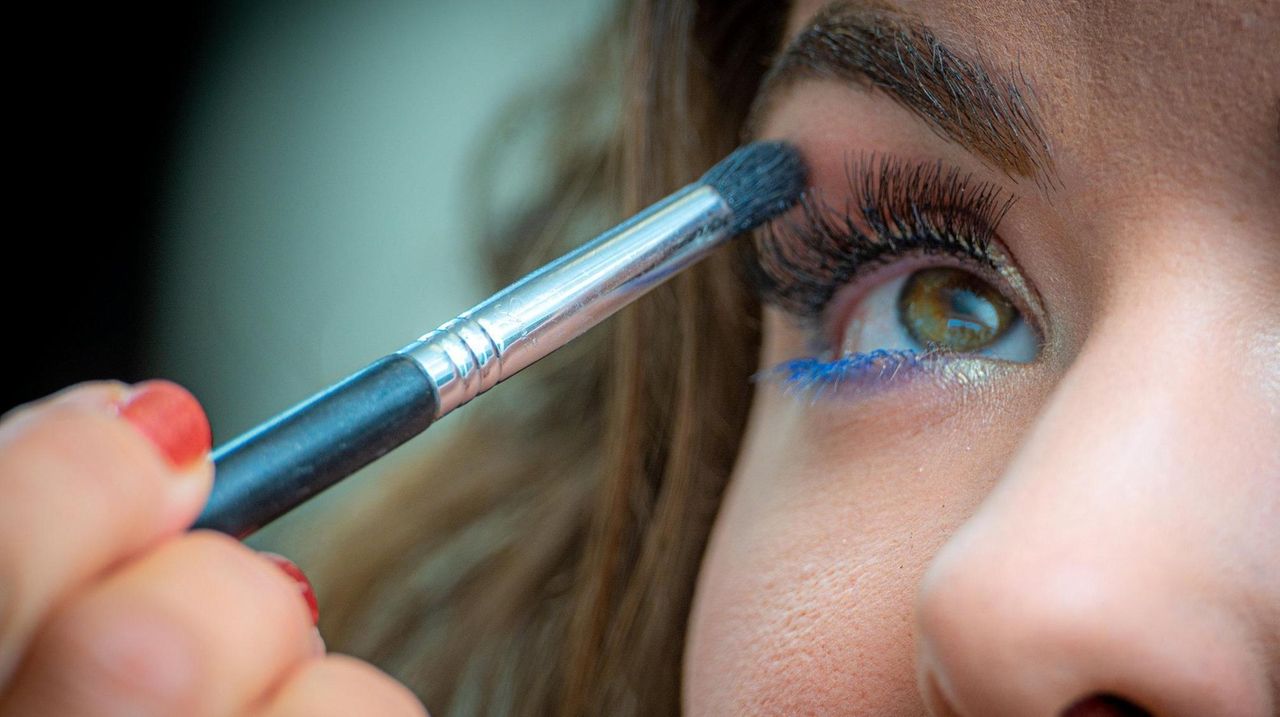 Wearing masks to prevent the spread of COVID-19 has shifted the focus in beauty care from the full face, to now a focus on the eyes. In the photo: Makeup Artist Alia Yassen embellishes Ana Christina's face at Shears of Elegance Salon in East Northport. In the video: Clementina Richardson takes us inside her salon, Envious Lashes in Commack. Credit: Johnny Milano

Lisa Magnuson of Port Washington says she was fine with the look of her eyes until recently when mask wearing brought them into sharp focus. She decided she needed Botox to remedy her crow’s feet and the vertical lines that can develop between the eyebrows — and her husband had the same procedures done on himself.

“People’s eyes are very prominent now, it’s all anybody sees," Magnuson, 51, says. "I was so pleased with that I’m getting lash enhancement [next] — I’ve never done that before.”

Magnuson and her husband are among a growing number of people following a new trend of enhancing the look of one’s eyes now that mask wearing has become the new norm. Surgeons, aestheticians and makeup artists on Long Island say they’re seeing more people seeking ways to make their eyes deliver that great first impression and unmask personalities, ranging from eye-catching makeup to surgery.

'WINDOW TO THE SOUL'

“With everybody wearing a mask, it’s like they say, ‘The eyes are the window to the soul,’ ” says Angela Abbott, 43, of Medford. She’s a nurse at Stony Brook University Hospital and says she got lash extensions to make her eyes “pop” since her signature smile can no longer be seen. She adds without her new lashes, in a mask she “looked dead” and now “my eyes pop. I want to brighten the patients’ day and make them feel everything will be OK.”

“The amount of men and women seeking solutions to the eye area is tremendous,” he says. “The eyes are the telltale sign of a person’s age, and now more than ever the eye area has become a significant focal point.” He's seen patients schedule both surgical and nonsurgical procedures to address concerns about the eyelids and wrinkles around the eyes, including Botox, upper blepharoplasty (lifting upper eyelid) and lower blepharoplasty (reduce under eye puffiness and folds).

But it's not all plastic surgery. Long Islanders are trying out eyelash extensions, microblading (tattooing eyebrows onto your face), lash lifting, brow lamination and more, some for the first time. Clementina Richardson, founder of Envious Lashes in Commack, says people are looking to enhance the eyes "however possible."

They’re going for bolder, fuller eyebrows and lashes to “lift and elevate” for a younger look, she says. “Lash extensions are very big,” Richardson adds. She says her clients go for a variety of eye looks; for example, people with more narrow or slanted eyes often want to make their eyes look larger and more open, while others with narrower eyes want to enhance that feature with a “super cat eye” look popular with celebrities.

Mask wearing is evolving makeup trends, too. Crissy McWeeney, founder and CEO of The House of Makeup in Sayville, says a lot of brides are coming in wanting heavier makeup than they would usually wear because they're being photographed in masks. "Some even want sparkles now and really fluffy lashes."

'FASHION FOR YOUR FACE'

Shari Saint, managing owner and founder of Bare Fruit Sugaring & Brow Studio, which has locations in Westbury and Wantagh, says she has noticed customers lately venturing beyond their comfort zone to make their eyes standouts.

“They’re trying services they’ve never tried before — they’re no longer afraid [of something new],” Saint says. “People feel good about having their eyebrows on point so their eyes pop and they don’t look so harsh.” She’s noticed clients trying brow lamination in particular to make their eyebrows fuller, and eyelash extensions, henna and ombre tints and microblading are hot.

Julia Chan, manager of the Water2Moon spray tan and lash studio in West Babylon, says that lash extensions and lifts have become huge.

“They were popular before the lockdown but never like now since the reopening,” Chan says. “People want to feel good about the way their eyes look … and they want to enhance them.”

Celine Rana, 22 of Coram, got lamination done on her eyebrows at Envious Lashes in July to make them thicker.

“I love it,” Rana says. “I think it enhances the face since your face is covered from your nose to your mouth and people tend to look at your eyes more and you can tell emotions.” She adds that social media has made procedures like lash lifts — something she wants to get next — a trend. “It’s fashion, fashion for your face.”

Thinking of trying out ways to make your own eyes pop? Envious Lashes in Commack breaks down some popular services. Prices vary per location.

Lash lift: includes tinting the lashes to make them darker and have more pop; $175.

Lash extensions: cosmetic application with extensions (commonly made from a variety of materials including human, synthetic or horsehair, silk and mink) used to enhance the thickness, fullness, curl and length of natural eyelashes; $105 to $330 depending on the volume.

Lash tint: tinting of the upper and bottom lashes; $40.

Brow extensions: applying fine fibers to make enhancements look like they are growing from the skin; $200 and up.

3 LI spots offering pumpkin bagels, treats
LI drive-in, outdoor movie and concert schedule for fall
Festivals and carnivals happening on LI this fall
Halloween dinner made easy: Spaghetti with 'eyeballs'
Halal chain opens second LI location, in Commack
Have eyeballs and bones in your dinner at this Halloween pop-up
Didn’t find what you were looking for?