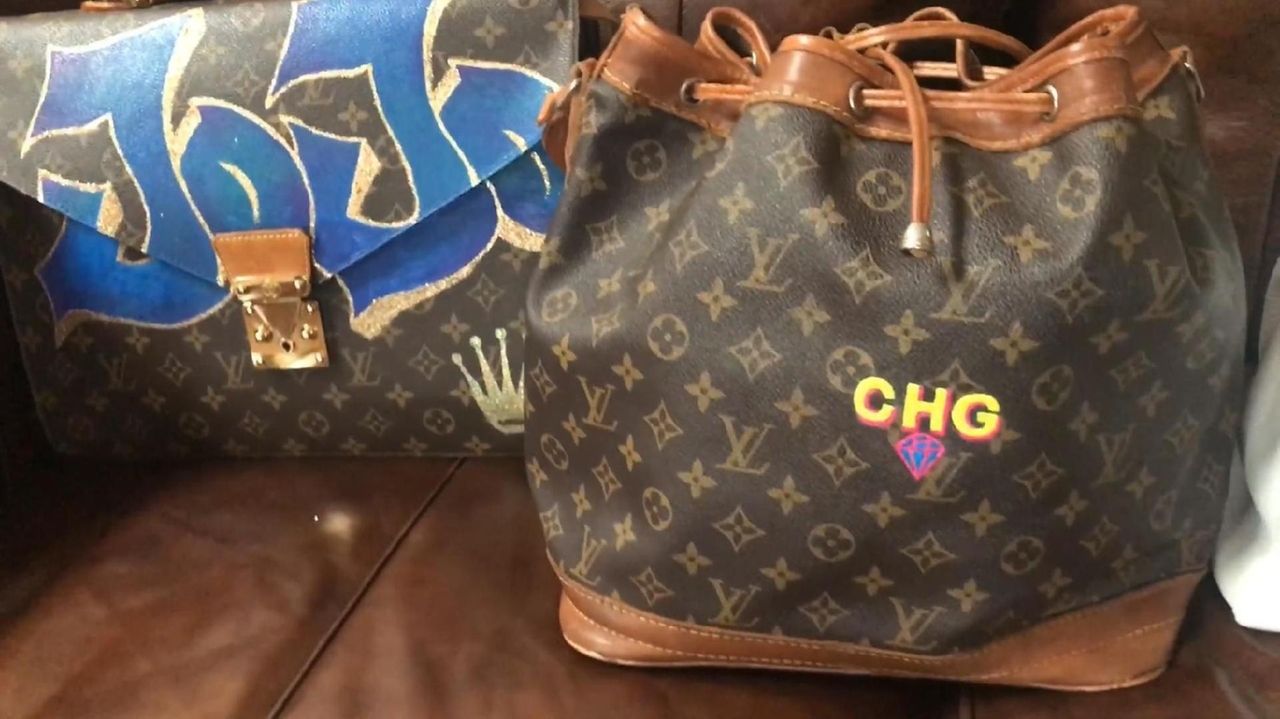 Nicole DiMasi, owner of Lady Cuir Restoration, explains her work as one of Long Island's most sought-after restorers of leather handbags, shoes and accessories from such luxury labels as Chanel, Gucci and Louis Vuitton at her Glen Cove home, Jan. 12, 2018. Credit: Newsday / Janelle Griffith; Bruce Gilbert

“I loved this bag so much that I even used it when the strap was half-broken and a piece of wire was sticking out of the bottom and told my sister and my friends at college, ‘It’s vintage,’ despite knowing full well that the bag was on its last leg,” Griffin says.

Store employees referred Griffin to Nicole DiMasi, whose help they enlist to clean and restore designer bags for resale.

When DiMasi received the bag, which retails for almost $1,500, it was practically destroyed, the natural cowhide trimmings coming undone.

“I could not see why she would want to invest in repairing this bag,” says DiMasi, owner of Lady Cuir Restoration. “I advised her it wasn’t worth restoring.”

That was until Griffin explained her motivation was sentiment and not style alone: It had belonged to her mother, Catherine, who died in December 2015. Her mother owned the bag for as long as Griffin could remember and carried it often. Griffin had done the same since her mother’s death — to carry a part of her with her.

For $600, DiMasi restored the bag to like-new condition and personally monogrammed it for free with a symbol of a gem that represents the elder Griffin’s nickname for herself and her two daughters.

WHERE LEATHER GOES TO REHAB

DiMasi has established herself as one of Long Island’s most sought-after restorers of handbags, shoes and accessories from such luxury labels as Hermès, Céline, Chanel, Gucci and Louis Vuitton, as well as the less expensive Coach and Michael Kors brands.

“Giving a bag new life can include repairs and also revamping the style, which I really enjoy,” DiMasi, 44, says. She hand-dyes and customizes bags with art or monograms out of a small workshop in her Glen Cove home. Most work, which can include cleaning, color refinishing, piping, metal or lining replacement and custom handles is done out of her Bayside workshop.

Decades in the business have taught DiMasi that for some people, like Griffin, handbags and leather goods are heirlooms in the same way jewelry is to so many.

“Women are more willing to splurge on a beautiful designer handbag than any other wardrobe component,” DiMasi says. “Once it starts to show wear and tear, it devalues your investment. That is the basis for how my business was founded.”

DiMasi trained alongside craftsmen with more than 40 years of experience to learn the art of leather restoration.

“Our company name, Cuir, means leather in French,” DiMasi says. “I wanted it to be feminine, adding ‘Lady’ to be identified with women.”

She worked in Manhattan for many years, and in 2009 launched Lady Cuir Restoration, servicing hundreds of dry cleaners and larger leather restoration companies. After the birth of her daughter, Hudson, in 2013, DiMasi shifted her focus to Long Island to be closer to home. She partnered with a stable of local consignment boutiques including LuxeSwap in Oyster Bay, Revival in Roslyn and One Last Look and Worth Repeating, both in Locust Valley. A great deal of her business is generated by word-of-mouth.

Last summer, Matthew Ruiz, whose boutique LuxeSwap specializes in consignment and luxury resale, had a $10,000 Hermès Kelly leather bag that needed minor repairs to its stitching. The fixes would have been costly and taken several months had he gone through the bag maker.

He entrusted DiMasi with the in-demand bag. Three weeks later, it was returned to him. It would have taken the Hermès label a year to turn it around, he says, and the level of craftsmanship was the same but at a fraction of the price.

“On Long Island, it’s very challenging to find someone that has city-level work,” Ruiz says. “For handbags, I wouldn’t go anywhere else.”

Keeping Lady Cuir “small-scale” has allowed DiMasi to be hands-on. She employs three people. During their busy season of September through January, and again right before June — when DiMasi says most people change over their closets — her team will average five to 10 handbags a week.

This year, DiMasi plans to open a boutique somewhere between Manhasset and Locust Valley, where she will provide one-on-one consultations, repairs and custom creations.

HOW IT WORKS Drop-offs can be made at several consignment shops in Nassau County. A complimentary mail-in service or local concierge pickup and delivery service is also available.

PRICING Fees for repairs are determined on a bag-by-bag basis and depends on the condition of the item.

LI landlords call for more COVID-19 grants for eateries
Tickets gone for Jones Beach Air Show except practice run
Take a nature walk at Sands Point Preserve, more things to do this weekend
LI drive-in movie, concert schedule for the spring and summer
Things to do this Memorial Day weekend on LI
Weekly farmers markets to visit this season
Didn’t find what you were looking for?