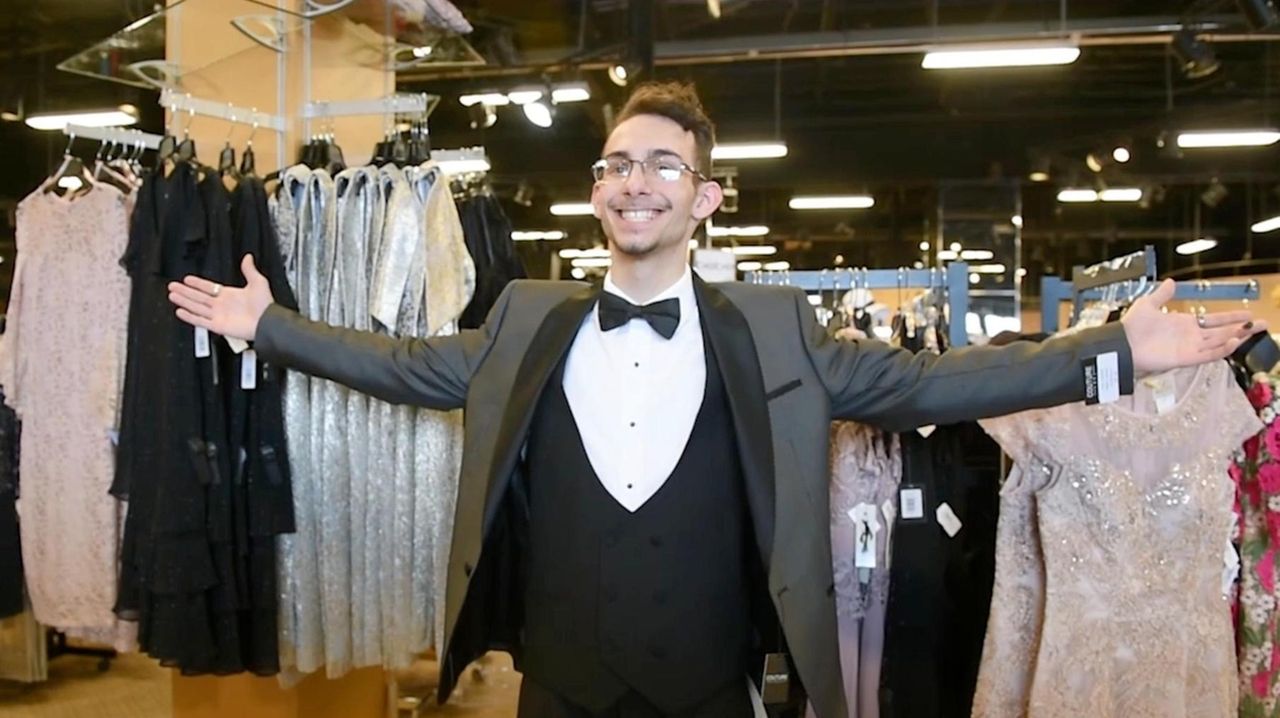 Keanu Waters, 17, the senior class president of Brentwood High School, is this year's Project Prom winner — and now it's up to Newsday readers to decide what he should wear Credit: Jessica Rotkiewicz; Newsday / Tom Ferrara

Keanu Waters, 17, the senior class president of Brentwood High School, is this year’s Project Prom winner — and now it’s up to Newsday readers to decide what he should wear.

The self-described “popular nerd” had been planning to skip renting a tuxedo to the prom. “I didn’t see it as a necessary expense because I had to pay for all my AP exams and my senior trip,” he says. “I decided I would go and just wear a suit that I had.”

That kind of pragmatic thinking wouldn’t surprise people who know Waters. He’s an honor student who will attend Long Island University Post in Brookville next year on a full scholarship. But moreover, they know Waters for his spirit.

“Keanu is an amazing kid who devotes most of his time to school even when he’s not in school,” district guidance coordinator Wayne Abenes said in his nomination of Waters. It’s the first time a young man has been the lone star of Newsday’s annual prom feature.

After years of Brentwood and its schools being stained with a reputation for gang violence, superintendent Richard Loeschner says “part of Keanu’s mission is to change the conversation.” He does that, Loeschner says with his “focus on improving the school community.”

His mom, Shireen Dajani, says, “ I think he wants to make a difference. People just ‘talk’ and he wants to ‘do.’ He really is like a cool breeze on a warm day spreading love. Keanu’s superpower is his ability to get people to listen to him. They want to hear what this young man has to say.”

In his quest to uplift and change perceptions he’s met with local politicians, including Islip Town Supervisor Angie Carpenter, who says she was “blown away” by him. “It’s really something coming from a community that some people look at and say, ‘Oh my god, there are gangs there,’ and here we’ve got a school district that has so much to be proud of,” she says. “He is very impressive.”

Guidance counselor Christine Burrows describes him as “a very inclusive kind of kid who will speak out on behalf of anybody. And he will fight for what’s right and when someone needs a voice he will give it to them.”

Proving the point, in October, Keanu created the A.P.P.L.E. club (the acronym stands for Always Promoting Peace, Love and Equality) made up of students from different ethnicities, religions and of varied academic standing.

“I always see the exact same faces in all the clubs and societies — mostly honor students. The students in A.P.P.L.E. aren’t necessarily academically outstanding but are there so we can get the best representation about how everybody feels. In doing so, we better the school culture and make people who don’t’ feel welcome feel welcome and really want to learn,” he says.

But despite his maturity, Waters is still a kid who wants to look good at prom. He was driving when he found out he won Project Prom and “got so, so choked up I had to pull over,” he says. Next came an intensive two-day fashion shoot that began with a shopping expedition at Black Tie Tuxedo by Sarno in Farmingdale (it’s one of three locations, this one housed in Estelle’s Dressy Dresses).

“Oh wow, I’m really feeling this,” he said, trying on multiple looks and occasionally busting a dance move. A few days later it was off to upscale Mad Men barbershop in Williston Park where Tim Santiago tamed Waters’ slightly wild hair with a half fade, shaved off his beard and trimmed his mustache. He was ready for his close-ups and enthusiastically modeled his favorite tuxes. And once again, he was enchanting. Tux store owner Mark Tricarico liked him so much he offered him a job. (He’s busy by the way, but very appreciative.)

Along for the ride, Waters’ girlfriend Carolann Torres, 17, and also a student at Brentwood High School, gamely agreed to coordinate her own outfit around whatever Newsday readers like best for her date. (Lucky lady, she’s getting a dress from Estelle’s to match whatever tux wins.)

At the end of it all, Keanu said, “I can’t even imagine how amazing prom is going to be.”

Now it’s up to you readers, to pick what Keanu will wear to his big night on May 31 at Crest Hollow Country Club in Woodbury — Newsday is buying — you’re voting at newsday.com/projectprom through May 3.

Prom is far from being all about the tux — this year's gown trends:

COLOR Pastels are always a staple, says Asena Pesman, executive buyer at prom dress central -- Estelle’s Dressy Dresses, in Farmingdale -- and this year there are plenty in powder blue and blush. But surprise — power colors are having a moment. “I’m seeing hunter green, red and royal blue along with the pastels,” says Pesman. In fact a sleek, fiery red satin gown is one of the hottest selling looks in the store.

SILHOUETTE Slim shapes in shiny satin get their interest from intricate lace-up backs. The ubiquitous off-the-shoulder style is still hot, this iteration, with lots of beading and high side slits in the skirt to make dancing so much easier.

SHINE Prom women want to sparkle and to the end, says Pesman, so “two-tone metallic glitter styles are selling well.”