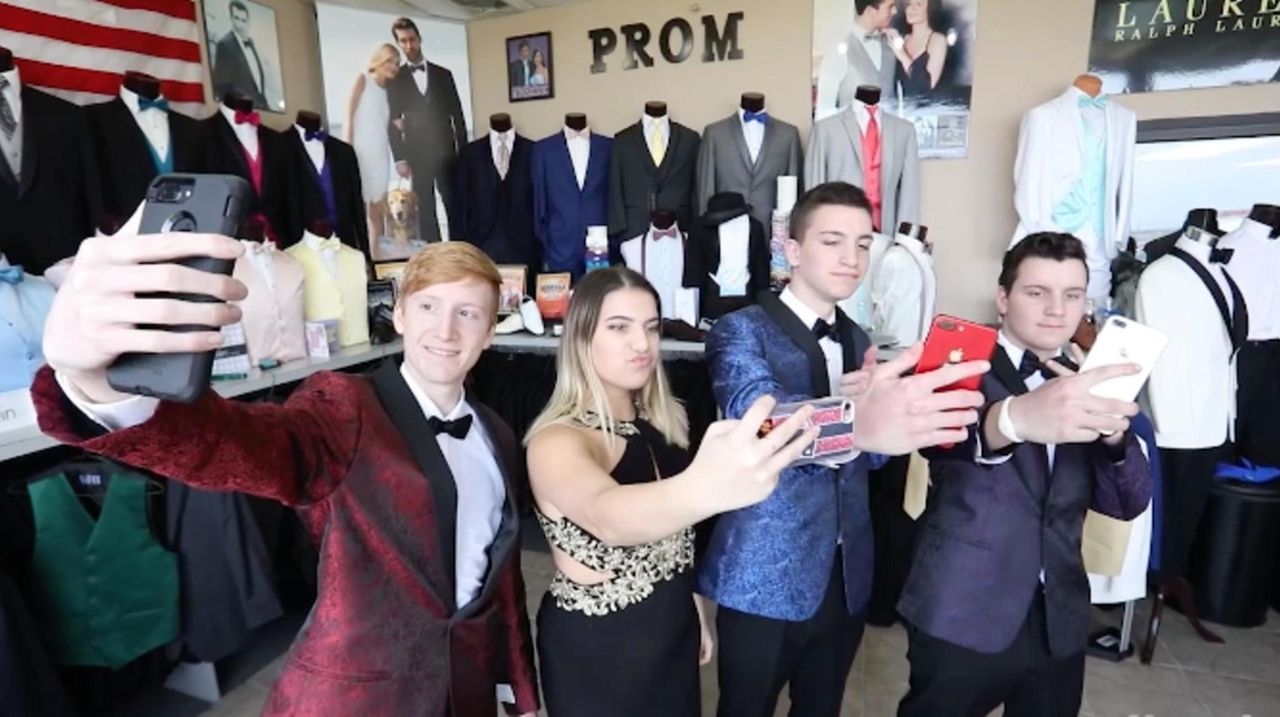 Quadruplets Alexa, James, Nick and Rob Soldo of Massapequa, who lost their father in 2015, were chosen for Newsday's annual Project Prom contest. On April 12, Newsday's Anne Bratskeir took the family to Bloomingdale's at Walt Whitman Shops in Huntington Station to pick out two dresses for Alexa, then on to MyTuxes at Ginos Galleria Tuxedos in East Farmingdale to choose two suits for each of the boys. On April 16, the quads were treated to a makeover and photo shoot at Newsday's photography studio. Each quadruplet picked out his or her two favorite outfits and readers get to choose what they will wear to the prom. Credit: Jessica Rotkiewicz

By Anne Bratskeir Special to Newsday Updated May 8, 2018 8:45 AM
Print
fbShare Tweet Email

Newsday readers have spoken. In a landslide vote, about 4,000 of you have determined what the Soldo quadruplets -- James, Alexa, Robert and Nick, 17 -- of Massapequa will wear to their prom at the Bourne Mansion in Oakdale June 20. (And, yes, Newsday is footing the bill for the dress, the tux rentals and a limousine.)

Some 3,300 votes went to the classic-with-a-twist “Crooners” ensembles, compared to about 700 who votes for the “Posh Prepsters.” Alexa, a standout in her white dress with floral appliqué from Bloomingdale’s, is thrilled. “I love it. This is the dress I was leaning toward, and I think the readers did a fantabulous job picking,” she says. “I knew I could trust them 100 percent.”

James, the oldest of the fab four by one minute, looked swanky in his retro-meets-mod pin-dot jacket with a shawl collar and emerald bow tie from MyTuxes at Gino’s Galleria.

“I’m happy with the look they chose. It’s actually the one I like better even though I like them both, so the readers did a good job,” he says.

The quads lost their dad, Jimmy Soldo, a few days after their 15th birthday, when he died of a heart attack. Grace Hyatt, a family friend, nominated them for Project Prom, noting that not only are they great kids, but they also work hard, sometimes missing out on typical teen experiences so they can help out their mom, Judy Soldo. For her part, Soldo says she enjoyed the process of shopping, the glam squad treatment for the kids and the studio photo shoot.

“You made us all feel special and loved. Somehow I feel I would have made prom shopping a chore, with all four not really being able to reflect on Jim as we did it, and you made that possible for us,” she says.

And in the words of the quads, “See you at prom!” We’ll be there.

Project Prom winners through the yearsHere, our winners from 2006 to 2018. Meet the Soldo quads: Newsday's Project Prom winnersReaders to choose the siblings' best look for the big event. Stores that offer discounts to students and teachersFlash a school ID and get up to 25 percent off clothing, accessories and more.

10 events, things to do this weekend on Long Island
It's Farmers Market Week all over the land, LI included
LI drive-in, outdoor movie and concert schedule for summer
New ramen bar opens in Stony Brook
3:07
65-year-old fulfills lifelong dream of opening restaurant
3:07
Here's what it's like to open a restaurant with your family
Didn’t find what you were looking for?