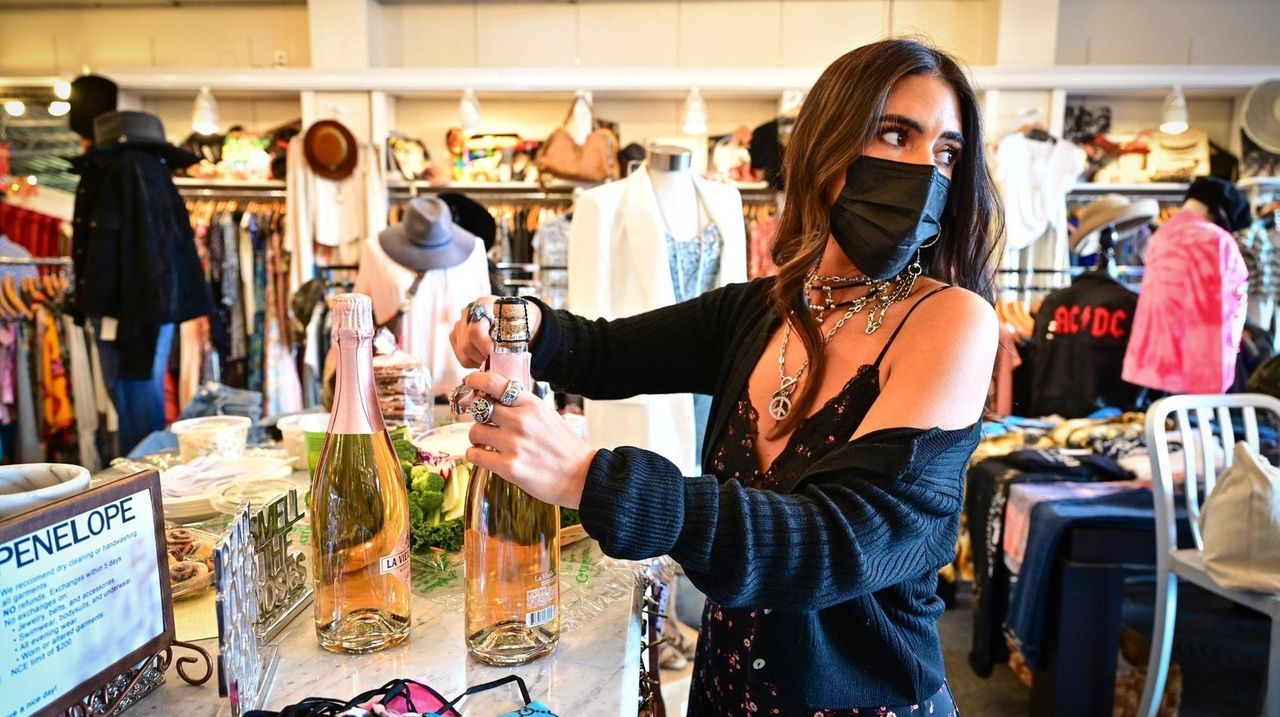 Some Long Island boutiques are shutting down to offer private shopping parties for fundraisers, birthdays and more. In the photo: Gabrielle Banschick, owner of Penelope, opens a bottle of sparkling rose during a private shopping party held at her Syosset clothing shop. In the video: We visit AJ Sunflower Boutique in Center Moriches to check out a shopping party. Credit: Barry Sloan

A bunch of women entered the Lola’s Lookbook store after hours recently and "ransacked" the place — excitedly grabbing up lots of dresses, pants and tops — but the owner was super happy about it and actually helped them during their spree.

Lola’s Lookbook in North Massapequa is one of many Long Island fashion and home décor boutiques that offer private shopping parties to customers who want to shop at a store outside of normal business hours with just a group of invited guests allowed in.

Such exclusive parties are starting to pick up steam again.

At some stores like Penelope, a women’s clothing store in Woodbury that features '60s and '70s-inspired fashions, even food and drinks are part of the event.

"I cannot tell you how excited everyone was," Ann Marie Inglese, of Massapequa Park, says of the nearly two-hour May 7th spree at she held at Lola’s Lookbook for about 15 people. "Everybody was just so happy. A couple of girls dropped $300 or $400 each." She adds, "The place got ransacked, but in a great way."

GET THE CELEBRITY TREATMENT

Leighann Cromie, 37, of Rockaway Beach, Queens was at Inglese's party and says she loved being part of a select group who could shop at the store when it would normally be closed.

"It’s a great little shop on a shopping strip and the clothes are beautiful," Cromie says. She purchased a pair of pants.

Penelope owner, Gabrielle Banschick, of Great Neck, says she’s made private shopping parties available to customers since the store opened in 2001 and they give the host the opportunity to get the celebrity treatment by having a shop cater just to them.

"We used to do a lot of charity events after hours," Banschick says. "A customer would be on the board of a charity and have their guests come in and shop and have drinks, but we also have them for girls who just want to come in and shop. We had a party with a blogger and a couple of her friends and her mom’s friends."

Banschick adds, "Customers want to feel like we’re just for them."

Because Penelope carries modern as well as retro looks, Banschick says the fashions appeal to a wide range of ages — and a May 13th private shopping party at the store was a perfect example.

Danielle Robbins, 23, of Syosset, hosted the party with her mother, Leni Robbins, 60, also of Syosset. Not only were different age groups in attendance, both Robbins purchased the same dress. Banschick provided Champagne, snacks and desserts for the 6 p.m. gathering of about 10 people and the menu included a huge vegetable platter, mini cinnamon buns and chocolate pastries.

During the party, Danielle tried on the long black and pink floral maxi dress first, and when Leni saw how it looked on her daughter, she bought the dress for herself. In addition, the duo also each bought a pair of jeans, although those weren’t matching.

"We wanted to do something fun and exciting and support local businesses who have been going through so much because of COVID," Danielle says.

Long Island Babes and Bucks, an all-female fishing and hunting group, gave an April 20th shopping party at the AJ Sunflower Boutique in Center Moriches to benefit the New York Marine Rescue in Riverhead. A portion of each purchase went to the Rescue and $300 was raised. About 30 guests came and went during the two-hour event and they bought everything from candles to dresses and jeans.

AJ Sunflower owner Kate Goulding, 23, of Shirley, says that private shopping parties are great both for the exclusivity of the experience and for developing a more personal relationship with the owner of a store.

A sampling of other Long Island boutiques that off private shopping parties: