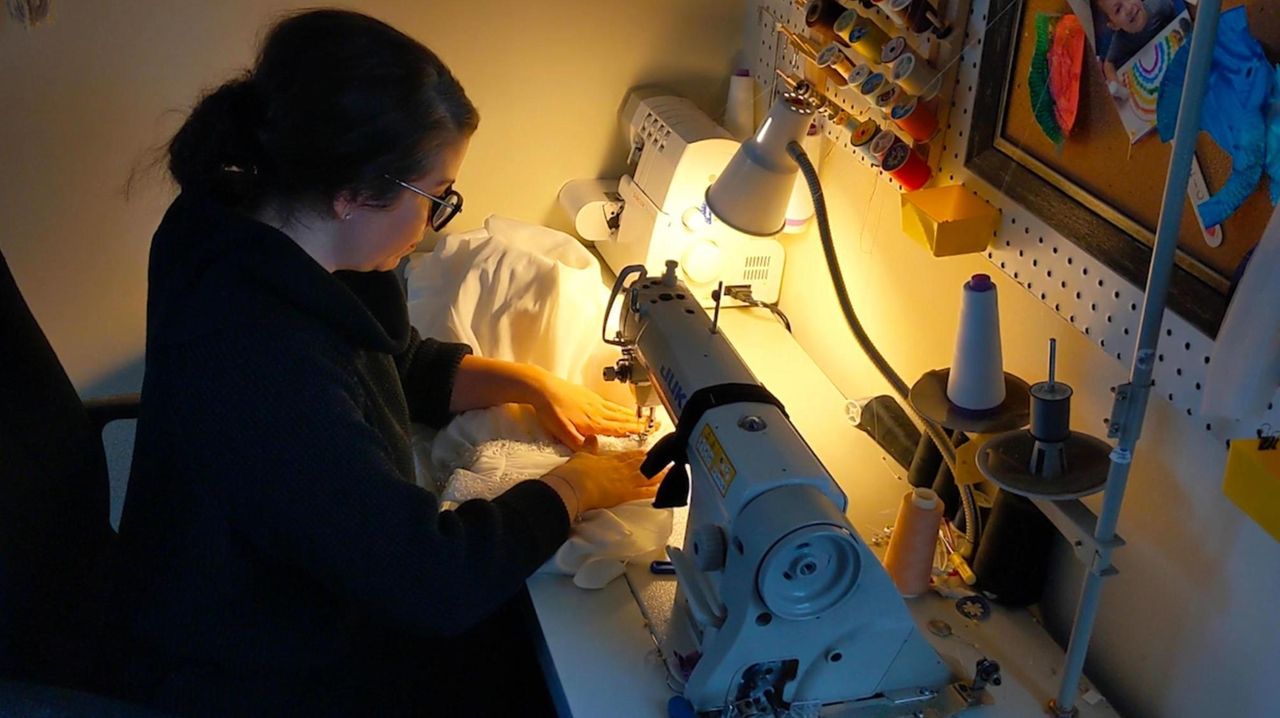 When Jessica DiRocco, 34, tried on her mother’s 1980s wedding dress years ago just for fun, she decided to one day wear it when she got married — inadvertently following her family’s growing nuptials tradition of turning something old into something new.

Sally Ann Zummo’s “something blue” came in the form of her late grandfather’s blue shirt — a piece of which was cut into the shape of a heart and sewn into the gown that she and her mother both wore for their trips down the aisle.

Christina Doyle plans to transform her mother’s wedding dress into a more modern frock for her big day and use some of the original beading to wrap around her bouquet.

DiRocco, Zummo and Doyle are among countless brides from Long Island and beyond who have chosen to honor their mothers in a very special way — by wearing or reusing their mom's wedding gown. Seamstresses say repurposing the dress their mothers got married in is something a lot of brides like to do — whether it’s wearing the dresses exactly as they were, updating the looks, or making them into anything from Baptism and Communion outfits to boys’ rompers, bridal purses, ring bearer pillows and teddy bears.

“I was honored and happy she wanted to wear it,” says DiRocco’s mother, Lucy, 60, of Oceanside, of her daughter’s decision to wear her wedding dress.

Oceanside seamstress Cat Munzing, who used to do design work and product management for such labels as Calvin Klein and Hickey Freeman, redesigned DiRocco’s dress by shortening it, removing the turtleneck to make way for a lower neckline, and replacing the billowing sleeves with cap sleeves.

“That allowed the beautiful lace and beading at the top of the dress to be preserved,” DiRocco, who grew up in Oceanside and now lives in Brooklyn, says. “It fit perfectly — it didn’t need to be taken in or anything.”

Munzing says that as a private dressmaker she has repurposed nearly 50 mother’s wedding gowns and grandmother’s wedding dresses. “It’s like an heirloom,” she says of when a bridal gown is used again in a family. “It’s also something ‘green’ because it can be passed on from generation to generation.”

DiRocco’s aunt, Laura Aldorasi, had also worn her mother’s wedding dress for her 1984 marriage after enjoying dressing up in the gown as a child — and while DiRocco had her mom's dress shortened, Aldorasi went to great lengths to be able to wear her mother’s gown at all.

“My parents were married in 1954 and I was very close to my mother, so wearing her wedding dress seemed like a very special thing to do,” Aldorasi, 58, of Baldwin says. “I always thought of wearing it from the first time I put it on to play dress-up. It was beautiful — it had little fabric buttons down the back — it was so delicate and so finely made.”

But Aldorasi ended up having to do a homemade restoration first.

“My mother had kept it in a box that got stuck in a flood (in the basement of their Brooklyn home), then when my parents moved to Long Island it was stored in the attic and that’s when I tried it on,” Aldorasi recalls. “I said, ‘I’m going to wear this one day.’” But the flood had left the dress covered in water stains and dirt. “We were told that dry cleaning would make the damage worse, so I soaked it in Whisk detergent and the water turned completely black. But we laid it on a table (to dry) and ironed it. Then a neighbor fixed the lace and made a veil to match the dress,” Aldorasi says. “It came out great and cost maybe $5 to restore.”

Aldorasi’s mother, Libby Natoli, 85, of Valley Stream, says that having a daughter wear your wedding dress is one of the highest honors. “I was very proud,” says Natoli. “I was so thrilled.”

Zummo, 27, of Levittown, says that wearing the wedding dress of her mother, Tina Ruby, 51, of Wantagh, was a tribute to their close relationship. Zummo tried Ruby’s dress on one day just to see how it looked and she got married to the idea of wearing it for her 2017 wedding.

“My mom is my best friend so it was about having that moment — she bought the first dress she tried on … so I thought we could share that special bond,” Zummo says. “And my grandfather had passed, so we had a heart made from one of his blue shirts stitched into the dress.”

Doyle, 28, of East Northport, says she plans to get married within the next few months. She isn’t certain of the wedding date but she’s certain of one thing — she’ll wear a modernized version of her mother’s wedding dress for her nuptials.

“My godmother and my mom made it together and it is so beautiful and has so much detail — that’s one of the reasons I want to wear it — and the other is because it’ll be one-of-a-kind and special,” Doyle says.

Doyle’s mother, Donna, 61, who shares a house in East Northport with her daughter, says the dress is “really special," and a way to honor Doyle’s late godmother.

Donna says, “I wanted (her to wear it), but I never thought that was going to happen.”

Anastasia Derenzo, 25, of Ridge, says that when she gets married in July of next year she too will restyle her mother’s wedding dress for the occasion. She wants to keep the dress mostly as it is but hopes to put a slit in up the side and remove the sleeves, which she plans to make into a purse.

“Since my mom did pass away, it would be a nice tribute,” Derenzo says. “She always wanted me to wear it.”

Danielle Roccisano, 32, of South Huntington, says that wearing her late mother’s wedding dress was a way of making her mother still be a part of her nuptials. “I had her dress redone to be more of a cocktail dress and wore it to the rehearsal dinner,” Roccisano adds. “It was a way for her to be there.”

Fishers Island Lemonade debuts vodka-spiked ice pops
1:03
A cherry blossom festival blooms in Greenport
6:10
An accident almost derailed her baking career. Now her cake shop is a runaway success
LI drive-in movie, concert schedule for the spring and summer
Mother's Day celebrations on LI, more things to do this weekend
Where to get great gelato on LI
Didn’t find what you were looking for?