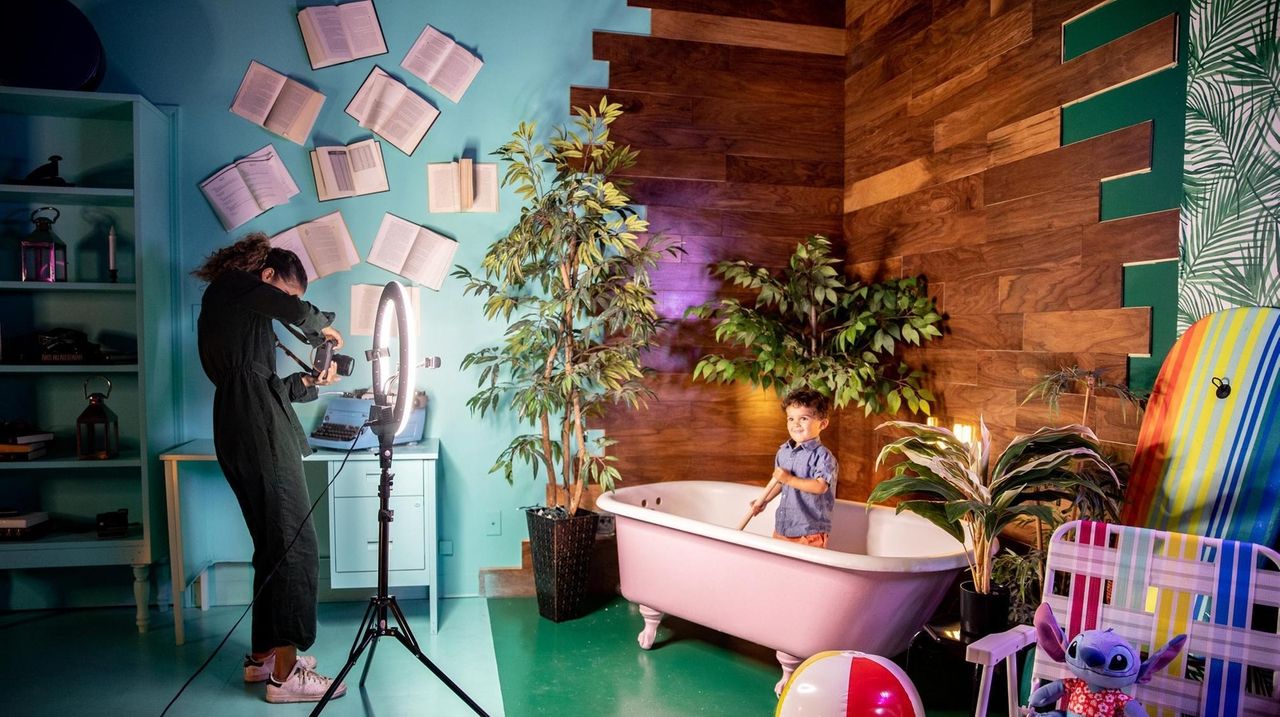 That’s the universal sentiment Catherine Ovejas, 50, and her partner (in life and business) Jose Rivera, 40, are banking on with their new business, PopUp Speakeasy Selfie Studio in Ronkonkoma, a social media haven, set in an innocuous 1,800-square-foot warehouse where selfie-seekers and TikTok fans can capture their images and videos in some 15 artfully arranged scenarios.

These individual vignettes include a pink claw-foot bathtub, an orange, bagel-centric diner booth, a bright yellow and blue ‘90s bank of school lockers and a vintage VW bus, also pink. The colorful props provide unexpected backdrops for selfie stars — yep, that would be you — and are enhanced by ring lights, Bluetooth remote shutters and neon lighting so there’s opportunity for each visitor to create their own scene and lighting.

The idea, a pandemic project for Ovejas, came about she says, because, "I was thinking about what we can do to give people an opportunity to do things they’ve been missing for the past year. I’ve always been interested in design and photography, and I liked the concept of having everything in one studio.’"

To keep the place from getting stale, she plans to juice the interest factor with an ever-rotating supply of props — hundreds of them — some which she hunts down (like a Garfield phone); some gifted (old-fashioned cameras, vinyl records) and many that she and Rivera rehab like the VW bus. "I’m pretty crafty," she says.

Coming soon: concepts including details inspired by "Bridgerton" and "Schitt’s Creek." The most recent add here is a Malibu Barbie-like/beach summer scene. She says, "It’s all about taking pop culture themes and bringing them to life."

As for the "speakeasy" portion of the business? "I’ve always been enamored with the design of a speakeasy — it’s secret — you go through one door into another and you’re there. Here, you see a warehouse and you’d never guess what’s behind that door." First comes a stark, white check-in lounge, "and when people go through another door their jaws drop."

This "made-for-Instagram" spot may be a rarity on Long Island, but "selfie museums" have become a national trend opening in major cities across the United States. Ovejas didn’t want to use the word museum. "When I think of a museum, you’re taking photos of the works of art. You’re not part of it. All the themes here are designed for you to be a part of them. I want people to make their own stories."

The business, which opened in May, has already attracted and appealed to many different types of folks just for fun and for special occasions including Mother’s Day and birthdays. Ovejas says she will rent the space out for private sessions and events as well and has already booked with professional photographers, charity fundraisers and even influencer groups.

As for safety protocols, Ovejas limits guests and says stations are sanitized before and after use.

Sabrina Sharp, 35, of Shirley and her son Nicholas, 8, visited in May and says, "It’s definitely worth the price of admission. My son is at the stage where he’s annoyed about taking pictures and he didn’t want to go. Now, when we had the chance to go a second time, he was basically begging." Sharp’s favorite was the VW bus while her son, she says, liked the musical area with its wall of vinyl records and head phones, and the two managed to take some 50 selfies in an hour.

Avid selfie and art installation fan, Cut Castro, 30, of the Bronx perched himself atop the VW bus for a photo that close to 400 of his followers liked. He says, "I was skeptical at first and didn’t know what to expect. But when I saw the set up there I thought, ‘this is going to be good.’ It was amazing and anything I posted, people gravitated to."

The place was a surprise to Holly Hunt, 45, of Shirley, a professional photographer herself, who went with a cousin, and says, "It impressed me that they could bring so much into what is not such a big space" Her favorite spot? "I liked the bagel shop. It’s so Long Island and we live for bagels here."

PopUp Speakeasy Selfie Studio; 1860 Pond Road, Ronkonkoma. General admission per person is $25 (ages 13 and up) for one-hour sessions; kids 5 through 12 are $15; kids 4 and under are free. Reservations are a must: popupspeakeasy.com.

3:36
10 events, things to do this weekend on Long Island
LI drive-in, outdoor movie and concert schedule for summer
High-end, waterfront restaurant opens in Port Jefferson
New LI dessert spot serves coffee imprinted with your photo
3 LI restaurants to try this weekend
Didn’t find what you were looking for?