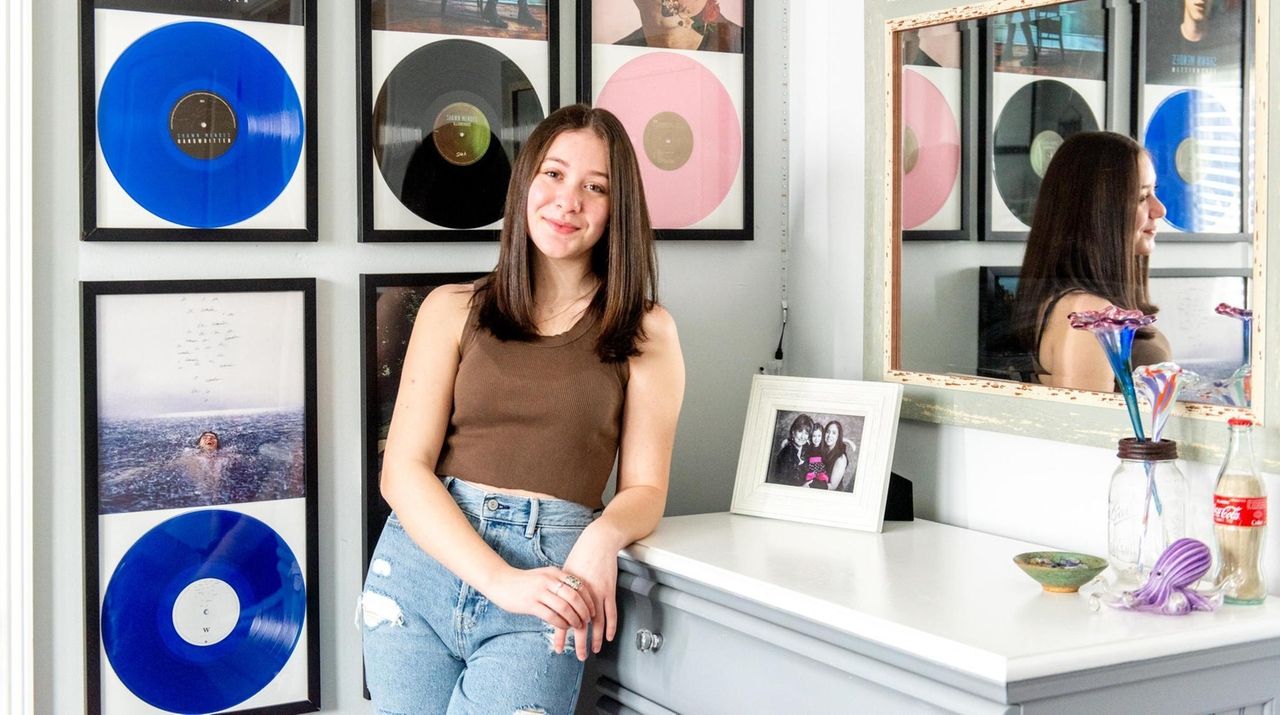 When the pandemic left many spending more time at home, it was a chance to redesign some of their indoor spaces. For one Port Washington teen, Madison Forman, it meant redoing her childhood bedroom to match her teen style. Credit: Johnny Milano

From imaginative DIY jobs to pro major league renovations, teen rooms became a focal point during the pandemic when they need to be oh-so-much more than a place to sleep.

And while the world seemed to stop due to the pandemic, growing up did not and during the yearlong stint in solitary, more than a few Long Island teens sprouted up and out of their more babyish rooms.

"When you’re spending six to eight hours plus a day in your room online learning instead of in a school, you start to care more about what the space looks like and how it functions for your life," says Kristin Koch, editor-in-chief of Seventeen where an Instagram survey revealed that 75% of some 2,500 respondents did all their studying and remote learning from their bedrooms and 63% redecorated their rooms in one way or another since the pandemic began.

"Bedrooms used to be a place where teens could have privacy and an escape from school and their friends and family, but with remote learning and social distancing, teens found themselves also using their rooms to attend school and hang out with friends," she adds.

DIY MAKEOVER ON A BUDGET

For Madison Forman, 15, a sophomore at Paul D. Schreiber High School it wasn’t that her small, 10x12 room was bad, but she says, "It wasn’t good for learning every day. And it was a preteen room. It wasn’t mature."

To that end, she and her DIY-savvy mom, Carin Forman, 52, teamed up to create a total transformation for under $500 — a new rug eating up $300 of the budget.

Her pink walls went gray, and a found bureau in the basement (this one given a slick coat of darker gray paint and new crystal knobs) replaced her space-hogging six drawer piece making room for a desk. A marble slab — a remnant from a marble yard — supported by inexpensive metal pipe legs is now her school workspace.

Her Broadway posters were replaced with album covers and vinyl records (heartthrob Shawn Mendes played a big role here) and even the Peter Rabbit waste bin that hailed from her newborn days was painted over and emblazoned with her initial.

"I chose the whole layout and the colors," says Madison. "It’s definitely Zen and relaxing with overall calm vibe." But there was more to it. "It allowed us to bond," says Madison.

Her mom adds, "I’ve always seen her creative side but I learned how genius she is — from creating an image in her head to bringing it to life. We definitely had laughs. It was fun and nice to spend so much time together. As a matter of fact, I might have her take on her brother’s room next."

The pandemic also led to a redo for Ava Candia, 15, of Dix Hills says mom Susan Candia, 51. "Everybody had their own space except for Ava whose room was not efficient in its former state. It was a frilly, little girl’s room in blush, white and cream with stuffed animals and dolls (a few of which she kept) — a baby room really."

Now, the walls are slathered with gray paint and an eye-popping geometric print wallpaper amps up one wall — the work all courtesy of a handy dad. Mom and daughter collaborated every step of the way and Ava, according to Candia, who thinks the room may now be the best in the house, is "very, very proud of it."

Same for Madison Forman of Port Washington. "I love it and feel like this is how my room will be forever," she says. Even the Shawn Mendes vinyls and art? "Well, maybe I’ll change that."

Interior designer Jackie Higgins of Beach Glass Designs in Huntington Bay created an “everything” room during the pandemic for 12-year-old twins Annabelle and Alex on the second floor of their Lloyd Harbor home. (Credit: Jackie Higgins)

On the flip side, interior designer Jackie Higgins of Beach Glass Designs in Huntington Bay, was charged with creating an "everything" room for twin 12-year-olds — Alex and Annabelle — a boy and a girl in Lloyd Harbor — that would outlive the pandemic yet be practical enough to support all their needs during it. The space, dubbed "the hangout room," formerly an enormous laundry room on the second floor now accommodates studying, quiet reading, musical instrument practice, gaming and ultimately sleepovers when they’re finally allowed.

"We showed intentional restraint in not filling the space with too much furniture so they would have room to spread out," she says, adding that teens love to sit on the floor (there’s plenty of it here). Higgins says the room offers, "Guided privacy," especially because it’s on the second floor.

To make it their own without being too "theme-y" Higgins incorporated, "things they love and that they’re interested in — models, stuffed animals, trophies and more to personalize the space but that can ultimately be removed."

Creating a personalized space is the quickest way to updating a teen’s room. (Credit: Wayfair)

While the pandemic caused many of us to rethink our spaces, for teens, remote learning and social distancing presented particular challenges. There’s a lot to consider when redecorating teenagers’ digs. Here are a few tips.

— It’s their room, not yours: "Barring the pandemic, whenever you do a teen’s room, you have to capture the essence of the kid," says interior designer Keith Baltimore of Baltimore Designs in Port Washington. Interior designer Jackie Higgins of Beach Glass Designs in Huntington Bay concurs. "I would advise parents to let their teenagers be themselves. The space has to reflect its occupants."

— Check out what’s hot: According to Kristin Koch, the editor in chief of Seventeen, these are the most popular décor styles for teen bedrooms (in order) based on info gathered from the publication’s Instagram poll: "Minimalist, Boho, celeb-inspired (most coveted being the rooms of Charli and Dixie D'Amelio, Sofia Carson, Dove Cameron, K-Pop stars and Dawson’s room from Dawson Creek), eclectic, Pinterest/TikTok inspired, Parisian-inspired and finally, beachy, ocean-themed."

— Keep it cool but not over the top: All the experts say use accessories rather than sweeping overhauls when redoing a teen room. "If your child loves comic books, you don’t want to do comic book wallpaper, but instead frame a piece of art that reflects that interest," says Baltimore. "I wouldn’t set anything in stone," he adds. "Do favorite colors on a bed or throw. Down the road it might become a guest room or an office, so include removable interests and art and don’t be trendy."

LI drive-in movie, concert schedule for the spring and summer
Take a nature walk at Sands Point Preserve, more things to do this weekend
Top LI chef sells pasta, sauces at farmers markets
Try something new: Recent LI restaurant openings
Where to watch sailing races, regattas on LI
Why Sayville may be LI's next 'it' restaurant destination
Didn’t find what you were looking for?