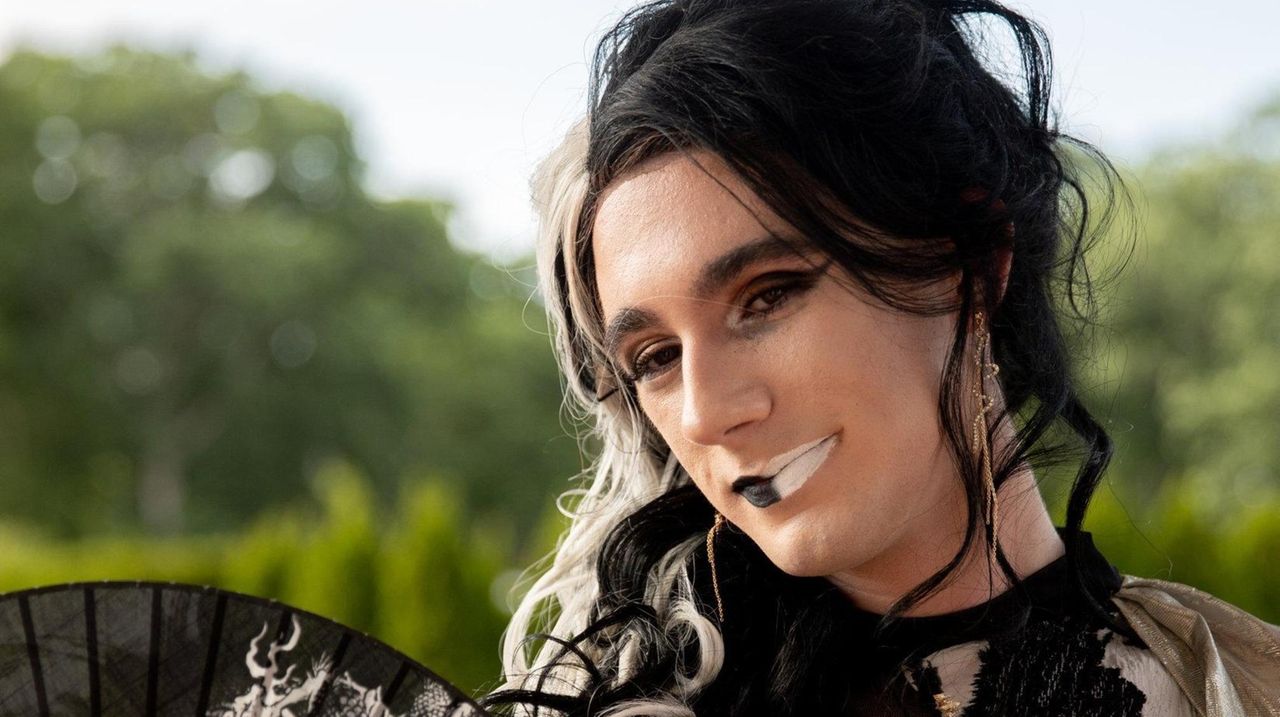 When senior prom was approaching, S. Ashton Rosato was hit with inspiration in the form of a cunning, vengeful, and arguably the most fashionable Disney antagonist: Cruella de Vil.

Rosato said he had always been fascinated with Cruella, the Dalmation-snatching dame depicted in "One Hundred and One Dalmatians" in 1961. But more recently, the 18-year-old was taken with Emma Stone’s cinematic portrayal of the character in "Cruella," the origin story of the villainess.

For two years, Rosato has been taking fashion design and merchandising classes in the Bixhorn Technical Center at Eastern Suffolk BOCES, alongside his studies at Connetquot High School.

So for prom, he had a plan: to design his own attire, inspired by Cruella.

"I learned so much and I wanted to be able to take that and use it in real life," he said. "So I decided to make my own dress."

His vision was to "do something a little special and a little extra." Rosato had already toyed with this fashion inspiration in the past. One year for Halloween, he created a "gender-bent version" of a Cruella costume, he said.

"I want to make a really classy gown using black and white," Rosato said on May 26. Prom was less than a month away, and he had his mock-up done. Soon, he would start sewing. "I’ll throw in some gold and come up with something really nice, with Cruella-inspired hair: half black, half white."

To achieve this part of the look, Rosato purchased a white wig and dyed half of it black to match Stone’s curly updo in the film. As for the gown, it’s white and floor-length with splashes of black and flecks of gold. Rosato spotted the fabric while sourcing materials in New York City.

"I wanted to go for subtle, yet statement," he said.

Rosato first fell in love with fashion design in his ninth grade art class. His friend taught him how to draw characters, and Rosato started having fun coming up with outfits for them to wear. Little did he know, that would become his passion and professional pursuit.

"I’m so picky when it comes to what I want to wear," Rosato said on June 9. At this point, his gown was coming together. He sewed the fabric mostly by machine; next came the hand-stitching for the lining. Fifteen hours of work had gone into the creation so far, with around 15 to 25 to go before the prom on June 21, he estimated. All of the sewing and stitching took place right in Rosato's home in Ronkonkoma. He turned a space in his dining room into his workshop.

"I just knew that if I really wanted to love it, I would have to be the one to create it."

Bringing a friend's vision to life

In addition to his own dress, Rosato sewed prom attire for two of his friends. For one, he created two-tone pants. One leg features a checkered pattern, with pinstripes on the other side.

For his other friend, Taylor Austin, Rosato designed and sewed another gown. This one is purple and decked out in tiny, silver beading and accentuated with red and white flower appliqués.

Austin came up with some ideas for what she wanted her gown to look like, but also asked Rosato to add in his own special touches. With the gown, she sported her own pair of gray and white Converse sneakers.

"I’m just really happy he agreed to make my prom dress for me, with my ideas," Austin said.

On the big night, Rosato posed for pre-prom photos in front of his house, excited to show off his masterpiece, and relieved that it came together. Prom was held at East Wind Long Island in Wading River.

Rosato added a sheer black sleeve to one side of the gown and a shimmery gold cape to the other. He walked in a pair of snakeskin high heels, and behind him, a stunning 10-foot train followed. Rosato completed his prom look with a smoky eye, winged eyeliner and black-and-white lipstick.

In total, it took Rosato more than 40 hours to sew the gown.

"I’m hoping to make a huge statement and just pretty much catch everybody’s eye," he said with a warm smile, in contrast to the villainess he was honoring that night.

In the fall, Rosato will keep the momentum going as a student at FIT in Manhattan. He hopes to focus on designing evening wear while there.

He’s happy that he’s discovered exactly what he wants to do with his life.

"When I’m in my zone sewing, I forget the world around me, and I’m happy doing it," Rosato said.

Take a little trip to Egypt at new Selden market
3:36
10 events, things to do this weekend on Long Island
LI drive-in, outdoor movie and concert schedule for summer
High-end, waterfront restaurant opens in Port Jefferson
New LI dessert spot serves coffee imprinted with your photo
3 LI restaurants to try this weekend
Didn’t find what you were looking for?