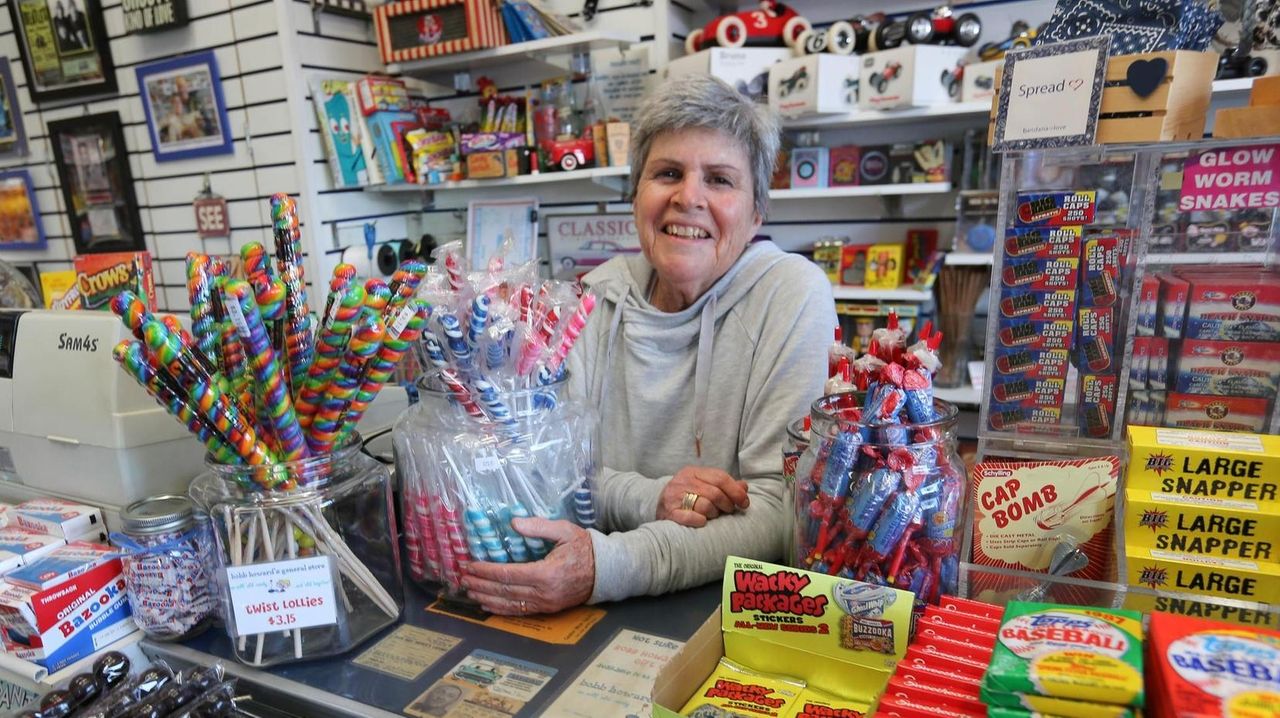 These are just some of the 1,500 different nostalgic candies, toys, merchandising signs, and collectibles available, at Bobb Howard’s General Store, where you’ll find penny candies, like Necco Wafers, Wax Lips, Atomic Fire Balls and Whistle Pops, starting at 5 cents and going up to $3-plus, for pre-packed assortments.

"In dark times, people want comfort," says Eileen Caplin Wysel, who’s owned the New Hyde Park store with her husband, Ronnie Wysel since 1982. "There’s nothing better than a comfort food or a toy from your childhood to bring back the memories, evoke calmness in people and put a smile on their face."

"When you go in there, there are portraits of Elvis and there’s the Beatles and all that fun stuff," says Nicolello. "And they have all sorts of great music playing."

Years ago, Nicolello would take his children to shop at Bobb Howard’s. These days, he brings his three-year-old granddaughter. "It’s really more of an atmosphere than it is anything else," says Nicolello. "It’s fun to go in there and spend some time with the kids. That’s what it’s all about."

While some stores might have a special section designated for nostalgia, Bobb Howard’s is an exclusive purveyor of nostalgia, notes Caplin Wysel.

"We sell stickball bats, Spalding, old-time Jacks: everything from someone’s childhood," she explains.

Laurito, whose blog, "A Vintage Nerd," explores Old Hollywood, shops at Bobb Howard’s for unique toys, like Panic Pete, whose eyes and nose pop out when you squeeze it, and oversized lollipops, chocolate coins and other candies her kids can’t easily find elsewhere.

In Massapequa, Alex Kuvish presides over Fantastic Toyage, which, he says, has been dubbed "The 'Star Wars' headquarters on Long Island."

"I have a lot of guys that come to get goodies for their man caves: everything from sports memorabilia to 'Star Wars' props," says Kuvish.

Living Legends Memorabilia & Collectibles carries a wide array of autographed items, from cards starting at $15, photos of and letters from presidents and celebrities, a bat signed by over 160 Yankee players, to a one-of-kind framed piece with photos and autographs of the cast of the "Wizard of Oz," for the asking price of $8,000.

Once a celebrity dies, Heller observes, there’s a greater demand for items with their images and signatures.

"After Kobe Bryant passed away, all of a sudden everybody wanted Kobe Bryant," he says.

One of the newer memorabilia shops on Long Island, Babylon Collectibles, which opened in June 2020, sells comic books, dating back to the 1950s, action figures, statues, toys, vintage coins, superhero and comic book wall art, and other collectibles.

"This is my life hobby and it became a business," says owner Jerzy Wronski.

For people who don’t wish to venture out during the pandemic, Just Kids Nostalgia offers a virtual shopping option for movie, TV, music, sports and other memorabilia.

"We sell all kinds of things that you grew up with," says owner Ken Farrell, who started a brick and mortar store in Huntington in 1978 and now sells pop culture collectibles from the 1930s through the 1980s mostly through eBay auctions on his website.

Nostalgia is popular because people are basically just kids at heart, Farrell opines.

"It’s a looking back at that time when we were thinking the world was a much better place," he says, adding, "But it really wasn’t. It just looked that way to us."