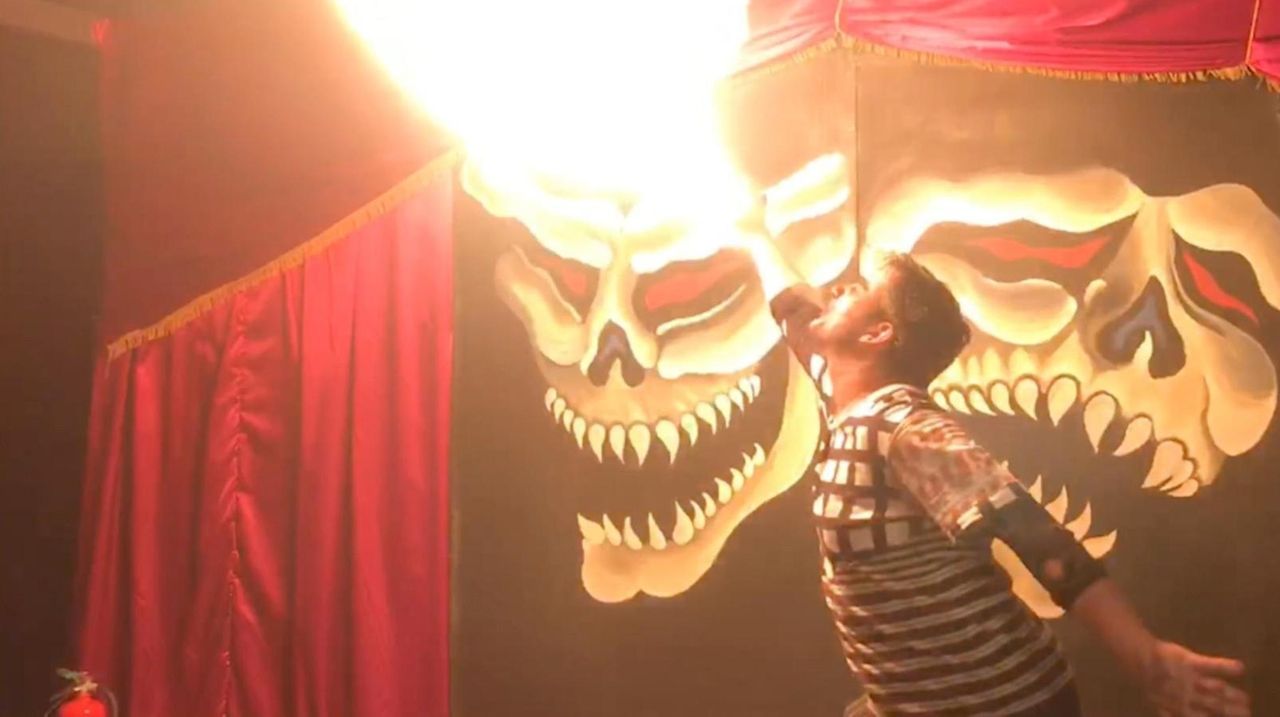 When he's not working as a theater technician building sets, fire artist Zach Thomas can be found eating and juggling fire at the Midway at Gateway's Haunted Playhouse in Bellport during the Halloween season. Credit: Newsday / David Criblez

Before he got his driver’s license, Zach Thomas learned how to juggle knives. He grew up surrounded by acrobats, jugglers and magicians at the festivals and Renaissance fairs popular in York, Pennsylvania.

“My dad became a magician when I was about 10 and the vibe flowed onto me,” says Thomas, 27. “I started seeing other performers doing cool things and I wanted in.”

When he came out of college at age 22, Thomas found his specialty: Fire.

“There’s a fascination that I have with it,” he says. “Within human nature, there’s a primal attraction to fire. It was our first form of entertainment.”

When he’s not working as a theater technician building sets, Thomas is eating, juggling and breathing fire at Gateway's Haunted Playhouse outdoor midway in Bellport during the Halloween season.

“I keep people entertained as they wait to enter the haunt,” he says. “My job is to give them something cool to watch, take pictures of and discuss with their friends.”

Thomas even walks about on stilts, spooking guests.

“I like to sneak up behind people and grunt,” he admits.

Then comes the fire-eating.

“That’s a moment when I get to ham it up, build suspense and interact with the audience,” Thomas says. “I ask them, ‘Do you like fire? Do you want more fire? They are always like, ‘Ooooooh yeah!’ ”

Although he won’t reveal the secret to the stunt, Thomas swears there’s no cheating involved.

“There’s no liquid beyond human saliva and there’s no such thing as fake fire,” he says. “It’s all old-school vaudeville.”

The nerves, Thomas admit, never go away but help him stay in check.

“I’m of the opinion that when you get too comfortable with something that’s when you stop recognizing the danger,” he says. “You still want to stay focused and not get too complacent. It’s easy to get lost in a performance.”

Thomas’ big finish is his fire-breathing routine where he blows fireballs out of his mouth and into the air. The blast fuel is the same liquid used in backyard tiki torches. “There’s a specific way to blow it,” he says. “I’ve been known to get them up to 10 feet.”

Although Thomas has never been severely injured, there are aftereffects to grapple with.

“There’s been a singe every now and then, but nothing that a little burn cream couldn’t fix,” he says. “The blast fuel leaves a nasty taste. I brush my teeth after each performance and rinse with charcoal powder in water to clear out the toxins from my system.”