Consider a bit of data and a few statistics in contrasting and comparing the military jet performers at this weekend’s Bethpage Air Show.

Their aerobatics, experts say, are complementary.

The Canadian Forces Snowbirds’ 1960s-era jets fly about half as fast as the U.S. Navy Blue Angels’ much more advanced F/A-18 Hornets, which have a top speed of about 700 mph.

The Snowbirds, however, have nine performers — three more than the Blue Angels, said Lt. Michele Tremblay before the Canadians’ arrival Thursday at Republic Airport in East Farmingdale. 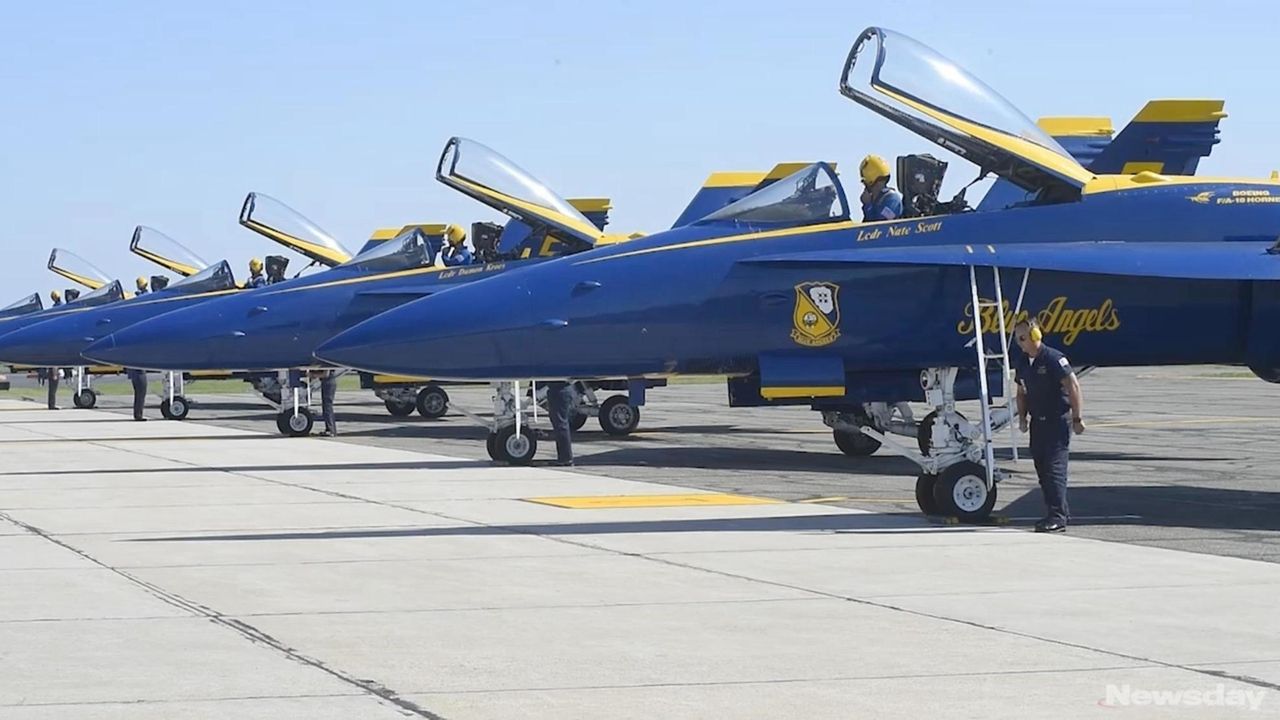 In some maneuvers, the wings of the Blue Angels’ jets are a mere 18 inches apart, Cmdr. Eric Doyle, the Navy team’s No. 1 boss, told reporters after landing for the 15th annual Memorial Day weekend show at Jones Beach.

At times, the Canadians, led by Snowbird Maj. Denis Bandet, also the No. 1 boss or team lead, fly with their wings overlapping by 4 feet, Tremblay said.

The Snowbirds’ trainer jets have none of that equipment.

Their jets “for the most part” have changed very little in decades, Bandet said after landing with his team.

And that is part of their draw for aficionados, as well as some of their pilots.

“My background is F-18s,” said Bandet, now serving his second stint with the team.

“I gravitated back to the Snowbirds because I just can’t stay away,” he said. “Nothing is telling us the proximity to an aircraft. It’s all timing and visual cues.”

Bandet has also given his jet a nickname.

“I call it a Cessna with a jet engine,” he said.

The Snowbirds do not, however, entirely spurn technology.

Some of the younger pilots tracking their fitness on devices, for example, discovered their hearts beat 180 times a minute during a show, Bantet said. “It’s like playing a sport for half an hour.”

One of the Canadians’ showstopping feats is the heart they draw with smoke in the sky.

That is no easy feat — and the wind also can be a spoiler.

Shortly after landing, the Canadians held a detailed, but rapid-fire briefing about the air show, setting their laptops on the wing of one of their jets.

The usual items were quickly reviewed — the hotel, schedules, maps, which security gates would be open and when, the ground frequency, which runways to use and which were closed, who the air boss is — the individual who directs all pilots — and where their rental cars were parked.

There also were a few Long Island twists, traffic and travel among them.

Snowbirds were told to take the train instead of driving their rental cars into New York City. “It’s not worth the pain and trouble,” Bandet said.

And they were cautioned to beware of radar speed traps and red light cameras.

10 events, things to do this weekend on Long Island
Indoor farmers markets to visit this winter
Lunar New Year celebrations a sign of courage, strength in 2022
Scoop: June opening planned for LI's 7th Dairy Queen
Popular breakfast spot to close in Rockville Centre
Didn’t find what you were looking for?