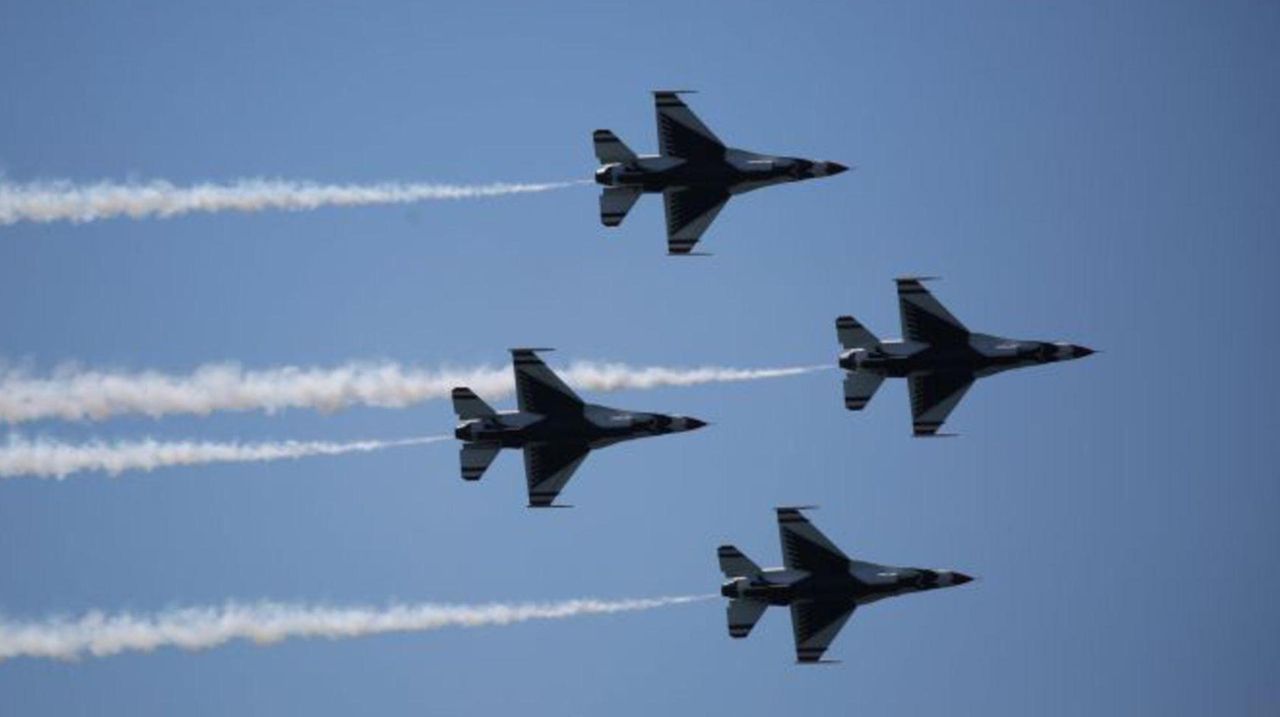 Jones Beach State Park was packed Friday with people watching the practice runs for the Bethpage Air Show. Officials predict around 350,000 to 400,000 spectators will attend the real deal on Saturday and Sunday. The event runs each day from 10 a.m. to 3 p.m.   Credit: Newsday / Shelby Knowles

The beach easily won out over the bay — where stiff breezes kicked up whitecaps — as a vantage point Friday for spectators watching gravity-defying aerobatics at the rehearsal for the Bethpage Air Show.

“The word has gotten out that you can come down to enjoy the practice show with less traffic, though you’ll miss some of the performers,” said Gorman, the air show founder.

Because of windy conditions, beachgoers vastly outnumbered boaters Friday. But in calm conditions, Zach’s Bay, the northern border of Jones Beach State Park, draws lots of boaters who enjoy views of the air shows, when military and civilian aviators reveal the outermost limits of what a stick and throttle can do.

With forecasts for the sun to shine and the gusts of wind to abate on Saturday, Nassau's marine police likely will be ensuring hundreds of boats stay out of restricted areas, observe the “no-wake zones,” carry required equipment, from life vests to flares, and stay safe during five-hour show.

In the back bays aboard the “9/11 Heroes," a 39-foot patrol boat with a top speed of about 46 mph, Nassau police officers Joseph Locher, Philip Endres and Eric Almskog were one of the many teams handling security Friday as the U.S. Air Force Thunderbirds soared overhead.

In the bays, Nassau marine police are joined by other agencies proficient in boating, including the Town of Oyster Bay Constables, State Park Police, the Suffolk County Police Department Marine Bureau, and even the Department of Environmental Conservation, which, after all, regulates fishing, explained Endres.

The U.S. Coast Guard watches over the Atlantic, closing off the "aerobatic box," the 500-foot-wide, 2-nautical-mile-long area where the performers work their magic, to other boats.

High winds on Friday grounded the U.S. Army Golden Knights Parachute Team, and Red Bull helicopter stunt pilot Aaron Fitzgerald had to cut his session short. Referring to the aerobatic box, he said, “I was just working hard to stay in it.”

Though he flies at about 115 mph, pulling off his mind-blowing stunts in a 30 mph wind is exceptionally tricky.

The list of potential targets on Nassau’s South Shore is daunting: everything from bridges to fuel tanks to waterside electrical or sewage treatment plants, “anything that could possibly be on the target list to go after,” Almskog said. Nassau’s marine police also carry out safety checks for the U.S. Department of Homeland Security, according to Officer Maureen Roche, declining to offer further details.

Nassau's three marine officers are grateful their craft has a cover, unlike some earlier models. Twelve-hour shifts in the sun, wind and rain — let alone in winter — when they might be rescuing people on the water, or searching for weapons, can be grueling work.

On Friday, the “Irish Echo,” helmed by Michael Madison, 40, of Wantagh, holding his 18-month old son — equipped with both the required life jacket and a teething ring — passed a spot inspection.

Madison, also accompanied by his son's aunt, Allison Deitel, 31, of Babylon, honored the purpose of the Memorial Day holiday, saying: “We’re out here to pay tribute to all the things the men and women do for our country to protect our freedom."