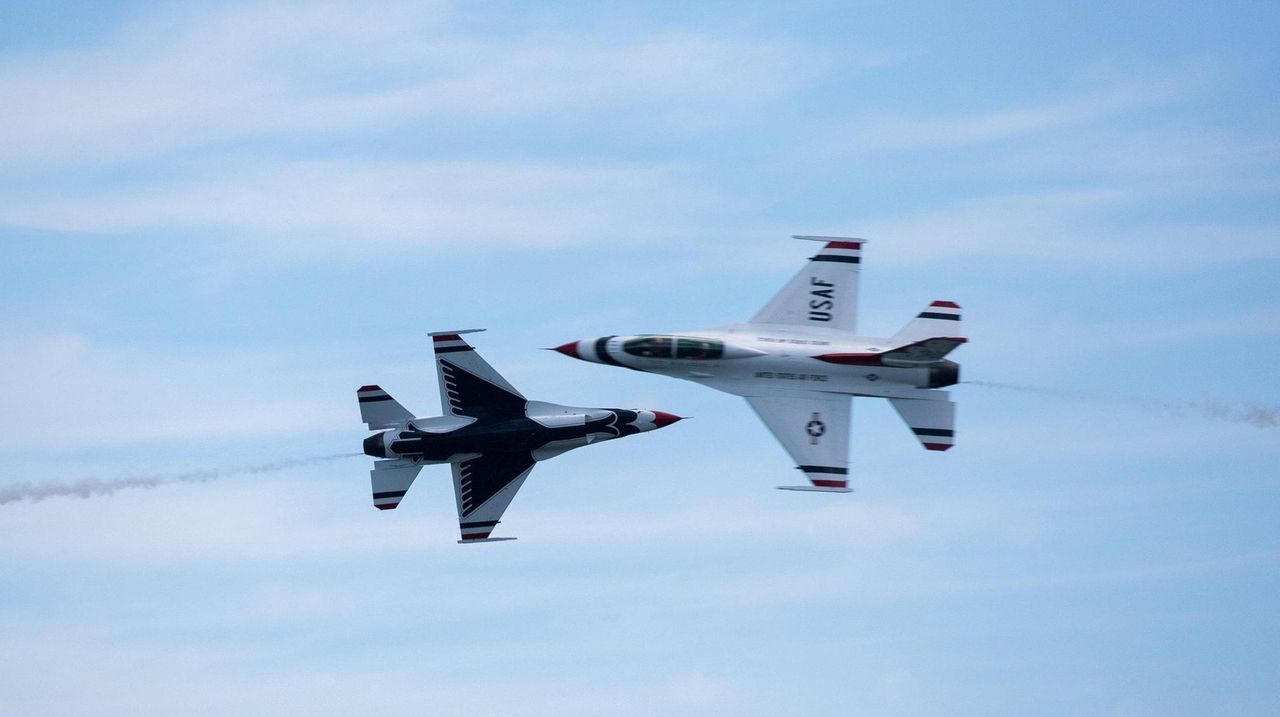 A perfect day at the beach married with awe-inspiring performances by civilian and military pilots — that was the 16th annual Bethpage Air Show on Saturday.

“You can’t get any better than this. You just have to respect the skill and expertise that’s required” of the aviators, said Kevin Hurtt, 60, who grew up in North Babylon and now lives in Frederick, Maryland.

The sunshine, the revelry, the pleasure of being outdoors with friends and family did not obscure the meaning of Memorial Day — which honors the men and women who gave their lives for this country.

“It’s very patriotic; It just makes you feel happy to be in the United States,” said Linda Hurtt, 62, who came with her husband to the show.

Sunday’s weather is forecast to be a bit warmer so attendance at the second day of the holiday weekend show might surpass Saturday’s, estimated at 114,000, down significantly from last summer’s Saturday show, which drew 193,000.

The closing flight of this summer’s shows, the U.S. Air Force Thunderbirds, blazed through the skies on what one announcer said was their 66th anniversary, climbing vertically into the sun. The six F-16 Fighting Falcons pirouetted gracefully in unison — passing each other, the two solo pilots reached closing speeds of almost 1,000 miles per hour.

Lawrence Louis-Jeune, 24, of East Patchogue, also extolled the military aviators’ talent: “Everything was like sharp and precise, it’s really cool.”

He is well on his way to getting his pilot’s license and hopes to fly corporate jets.

“Coming to a location where I grew up is really special to me,” said Golden Knights Maj. Marissa Chierichella, who grew up in Brooklyn and now lives in Fort Bragg, North Carolina. “I love being able to interact with young adults and teaching them about the opportunities in the Army.”

For the second summer in a row, Ryan Reis showed Ryan Claeson, 6, how to fold a parachute. The two had met at the last show.

“He’s been counting down to this show since Monday,” his mom, Tiffany Claeson, of Wantagh said.

Edward Tolver, a Marine veteran from Hempstead, goes to the air show every year. But this year was special, Tolver said, because his grandson came too.

Jacob Williams, 3, wore a Marines baseball cap that covered his eyes. He drank an orange soda that trickled down his chin, mesmerized by a jet that boomed overhead.

“He likes everything that makes a lot of noise,” Tolver said.

Planes of all varieties soared across Long Island skies through the Memorial Day weekend for the 16th annual Bethpage Air Show at Jones Beach State Park in 2019. Here are highlights of some of the eye-catching plane stunts, beachgoers and more.