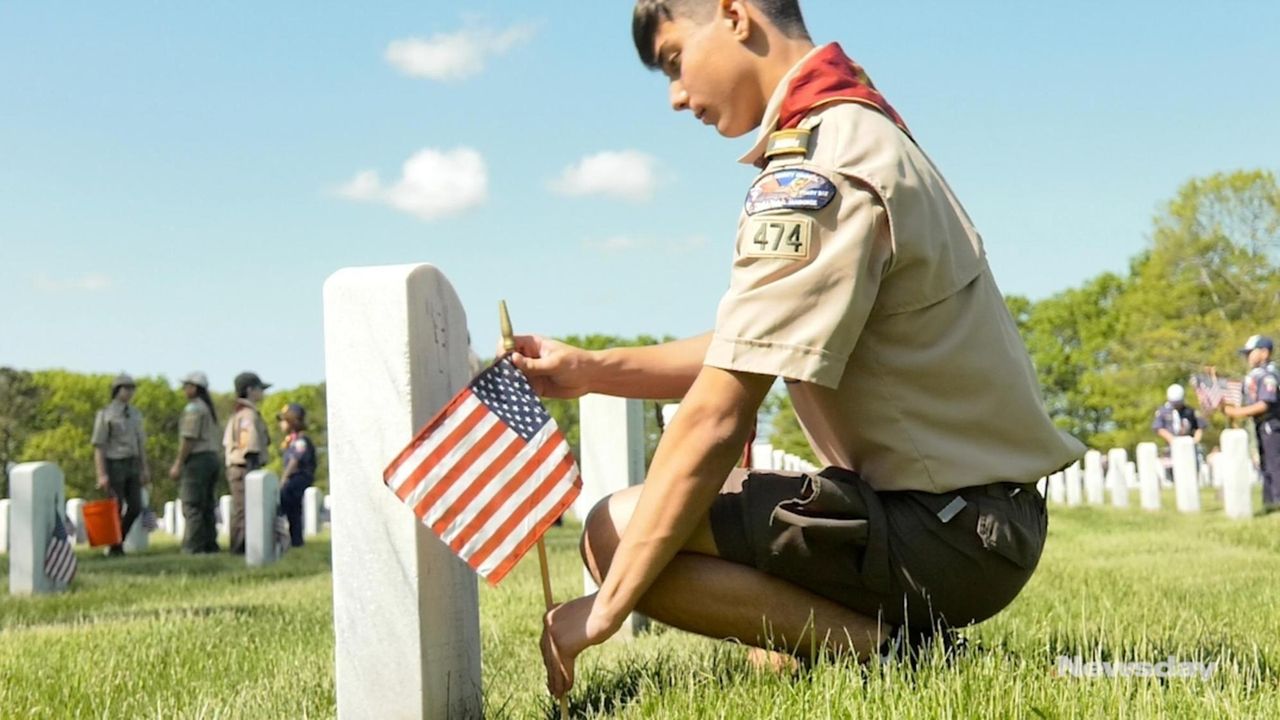 Volunteers descended upon Calverton National Cemetery on Saturday to participate in a flag placing ceremony where individual flags are placed in front of each gravestone to pay tribute to America's fallen soldiers on Memorial Day weekend. Credit: Newsday / John Paraskevas

“Each of these stones represents a life that died, and sometimes died fighting in war, for the freedoms we have,” Menegio said, hundreds of white marble gravestones behind him.
Saturday was the 25th year of the placing of the 12-by-8-inch flags at Calverton on Memorial Day weekend. A similar event took place earlier Saturday morning at Long Island National Cemetery in Farmingdale.
Menegio, 50, of East Moriches, told the Scouts to “have a high level of respect” as they stuck the wooden poles of the flags into the ground in front of the gravestones.
Menegio said he explained the significance of Memorial Day to the East Moriches Scouts because “they’re young kids.”
But, he added, “I think even as adults we forget the importance of this holiday weekend. It’s great to have barbecues, go out on your boat or play in your pool. But it’s also nice to remember those who died for our country.”
About 6,000 Scouts, parents, and members of American Legion posts, the Civil Air Patrol and other groups placed flags at each of the cemetery’s 225,000 graves, said Frank Bailey, 61, of Middle Island, who chairs the Calverton Gravesite Flag Placement Committee.
At 9:30 a.m., they fanned out among the graves, transforming lawns with flat, in-ground grave markers into a sea of flags, and adding the red, white and blue to the white marble of the aboveground stones, sometimes in a matter of minutes.
The placement of the flags began in 1995, after Frank Belsito, a member of the cemetery’s volunteer committee and commander of American Legion Post 1941, asked why Long Island National had such an event and Calverton did not, recalled Doris Brennan, who at the time was senior district executive in the Boy Scouts of America’s Medford office and who later co-founded the event with Belsito.
Cemetery officials said Calverton did not have the money to buy the flags and staff time to take the flags out after Memorial Day, Brennan said. Belsito then agreed to raise the money for the flags and ensure that volunteers removed them, she said. The cemetery now pays for replacement flags.
Saturday was the first flag-placing since Belsito died on July 3, 2018, at age 85.
Ann Colletta, 51, of Sound Beach, has been taking part in the event for more than a decade.
“This is just a small token of appreciation,” said Colletta, whose father, brother and uncles have all served in the military. “It’s a debt we can’t repay, so this is the least we can do.”
Each year, Colletta has brought daughter June Colletta, 12, a member of the all-girl Scouts BSA Troop 2019 that her mother leads.
“They served for us,” June said. “We can give something back.” The flags, she said, “are a symbol of our country, what they served for.”
Andrew Monaco, 10, a Boy Scout from Coram, said Saturday was “a big day to honor those who fought for our freedom and liberty, for us to be able to be free.”
At a ceremony after the flag-placing, Bailey thanked parents for bringing their children to the cemetery “and showing them what Memorial Day is all about.”
“It’s important to remember those heroes and the spouses of those heroes, because without them, we wouldn’t be where we are today,” he said.