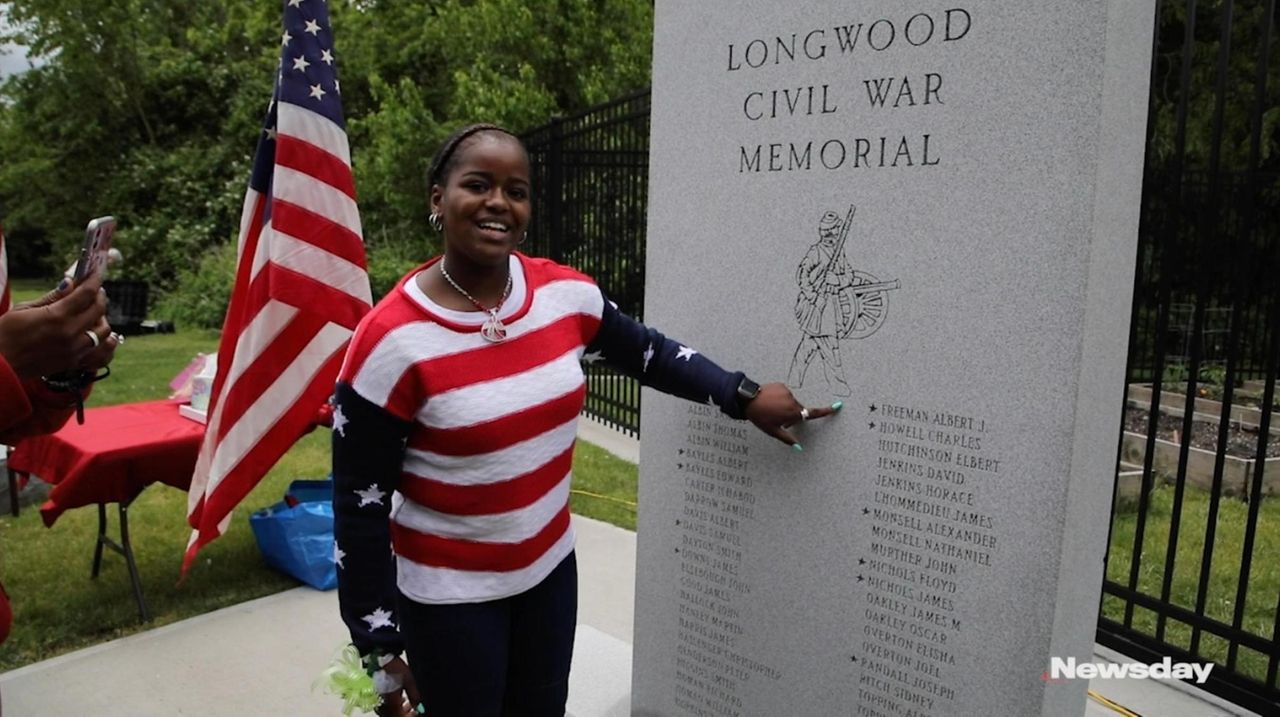 Albert Freeman, a Black Union soldier who died during the Civil War, was officially added to the Longwood Civil War Memorial on Monday. After months of research by Longwood Junior High School eighth-grader Carlie Preudhomme, Freeman's name is no longer lost to history. Credit: Barry Sloan

On Memorial Day, Long Islanders marched through hamlet downtowns to honor America's war dead. They craned their necks at the Bethpage Air Show at Jones Beach. At backyard barbecues, they celebrated the start of summer; at solemn ceremonies, they read the names of the fallen.

At least one of those ceremonies made history Monday, when the name of Albert Freeman, a Black Union soldier who died during the Civil War, was read for the first time at Middle Island’s Bartlett Pond Park ceremony commemorating Longwood community members who died fighting America’s wars.

Freeman's name was lost to history until Longwood Junior High School eighth-grader Carlie Preudhomme began her research a year ago. Freeman, born free in Middle Island in 1840, volunteered for the war in 1863 and died of dysentery a year later.

He was the first Black service member whose name was added to a memorial honoring 46 other area residents who served during the Civil War.

Freeman was paid just $62.79 for his service, but now the community will know his name and carry his legacy, Middle Island Civic Association president Gail Lynch-Bailey said. County officials presented Carlie with a proclamation honoring her research.

"Every time you find a story like Albert Freeman’s, that’s a thread that gets woven into the fabric of America and paints the full picture of who we are as a nation," said Legis. Rob Calarco (D-Patchogue), presiding officer of the Suffolk County Legislature. "I’m going to encourage you to keep doing that, keep digging into history. Keep telling these important stories."

Among the Memorial Day traditions to return after a year of changes caused by the COVID-19 pandemic: the Village of Freeport's annual commemoration. There, hundreds of firefighters and other first responders marched down flag-lined West Merrick Road past a war memorial flanked by red, white and blue wreaths.

"It’s important to remember how many people died in the flower of their life," said Albert Klipfel, 95, who fought in the Battle of Tinian in the Pacific in World War II. "I will never forget."

Klipfel, a Freeport resident who also fought in the Korean War, said he worries some people take for granted the sacrifices that were made.

Next to him, Steven Latus, 73 and an Air Force veteran, said Memorial Day is a chance for people to think about how vital military service is to our everyday lives.

"I think society as a whole feels disconnected from military service because there isn’t a draft," he said. "In the past there was a stronger relationship."

At Calverton National Cemetery, a stream of visitors stopped by the graves of Lt. Michael Murphy — a Navy SEAL who died in Afghanistan in 2005 — and those of Tech Sgt. Dashan J. Briggs of Port Jefferson Station, Master Sgt. Christopher J. Raguso of Commack and Captain Andreas B. O’Keeffe of Center Moriches, members of the New York Air National Guard 106th Rescue Wing who were killed in a 2018 helicopter crash in Iraq.

Vincent Palifka of Rocky Point brought his family to the graves.

"We owe them everything," he said of the fallen.

At Long Island National Cemetery, Richard Garcia, a Vietnam veteran who served in the Air Force, walked through the white headstones looking for the grave of his wife’s cousin, Miguel Angel Vale, killed in 1966 by a drunken driver during basic training.

"As Americans, as veterans, it’s only right that we come here," said Garcia, who lives in Massapequa. "I feel it’s my responsibility, my duty to come and pay my respects to all these people."

Maritza Sellas of Levittown and Army veteran Bob Gerard of Hicksville came to visit the grave of Gerard’s childhood friend Micky James Johns, killed in Vietnam in 1966 at the age of 19.

"I come every year just to say hello," said Gerard. "I don’t want him to think we have forgotten about him."

Nancy Zak of Levittown came to the cemetery to visit the grave of her grandfather, Albert Osberg, a veteran who died in 1943, when her father was just a youngster.

"I never knew him, but I want to find out more about him," she said.

In Smithtown, elected officials joined members of American Legion and Veterans of Foreign Wars for a ceremony outside Town Hall. Military service members "take a risk that they may not come back," said Legis. Leslie Kennedy (R-Nesconset). "They do it for our nation and they do it for each one individually … Today we thank those that did lay down their lives for us and our nation."

Previously, veterans had to be diagnosed by a provider at the Department of Veterans Affairs.

"Making it easier for veterans to be diagnosed so they can receive state benefits is crucial in making sure they are able to undergo any mental health treatment they may need once they retire from service," the governor said in a release from his office.

Attendance at most Long Island parks and beaches was light because of overcast and cool conditions, said George Gorman, Long Island regional director of the Office of Parks, Recreation and Historic Preservation.

The exception was Jones Beach, where crowds started arriving at 7 a.m. and 61,000 people attended the rescheduled show, Gorman said.

Beachgoers at Smith Point County Park in Shirley wore hoodies and closed-toe shoes on the boardwalk and the lifeguards on duty had little to do with few people heading into the rough surf.

Pat and Dave Jolly of Shirley said they saw the sun peek through the clouds and decided to head to the beach hoping to hear some live music. They got their wish as a band began setting up at the nearby stage.

"We’re just sitting here, relaxing. Normally we’d be barbecuing with family," said Pat Jolly, adding that she is soon embarking on a new job. "I’m unstressing from the old and looking forward to starting anew."

LI restaurants, theaters push back on state's vaccine suggestion
Family carnivals are back: Put these dates in your calendar
10 events, things to do this weekend on Long Island
LI drive-in, outdoor movie and concert schedule for summer
Tour the bay houses for a look at Long Island's past
Easy summer skirt steak with blender sauce
Didn’t find what you were looking for?