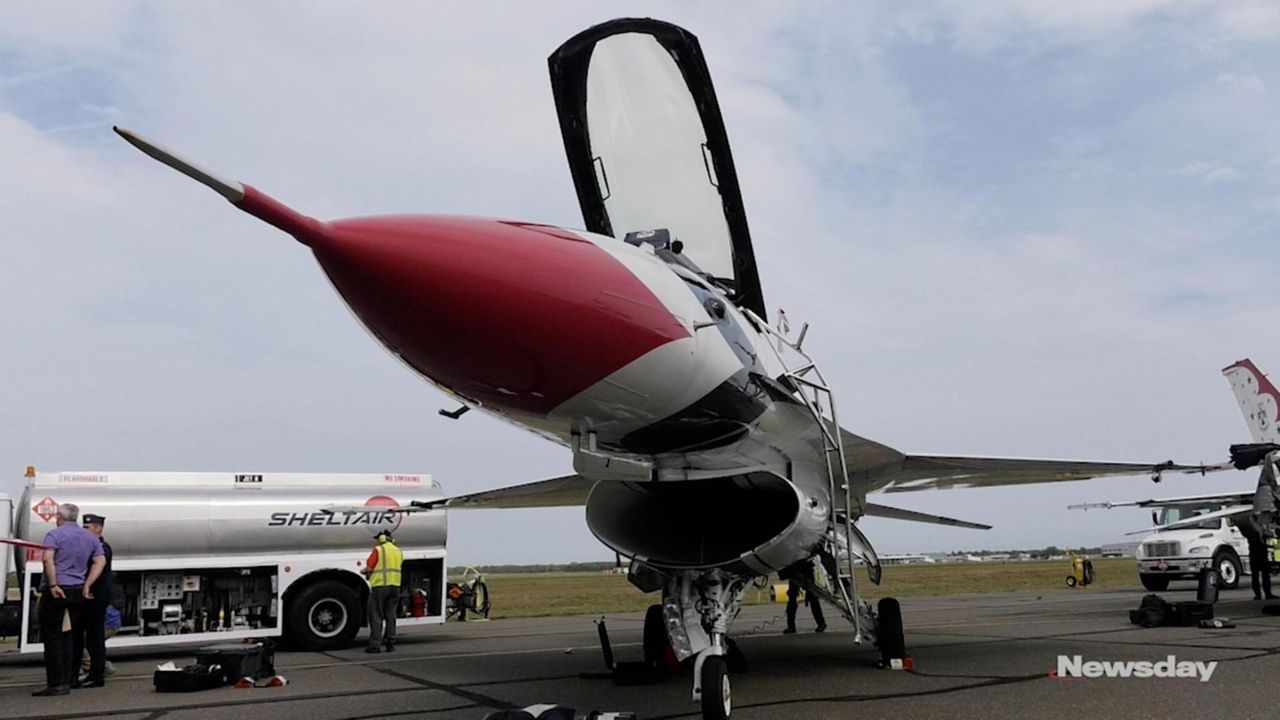 “It takes a lot of trust and a lot of practice,” said Thunderbird pilot and Air Force Maj. Whit Collins. “A lot of times, people think that we might hit …but at the last minute, we maneuver out of the way.”

The audience for the air show at Jones Beach State Park, likely to number in the hundreds of thousands if forecasts for sunny skies on Saturday and Sunday are correct, could well see the Thunderbirds' “high show.”

That one has the most daring and hazardous maneuvers — including cloverloops and high bomb bursts, when the jets break off in different directions.

“You’re going to see some fast action. It’s going to be loud, too, with the afterburners,” Collins said, referring to the F-16 Fighting Falcon’s fuel-injectors.

Though most Thunderbirds rotate out after two years, this is Collins’ third year with the team,  and he is now the No. 4 slot pilot. At the 2017 air show, he was lead solo.

The reason for his extension and that of Maj. Matt Kimmel reveals the perils these pilots routinely face. Last year, Thunderbirds’ Maj. Stephen Del Bagno died after crashing during a Nevada training flight.

Kimmel, previously the opposing solo pilot, now is lead solo. The new opposing solo is Capt. Michelle Curran, one of the few women ever to join the team.

The solo pilots aim to showcase the F-16’s maximum performance, with knife edge and inverted passes, for example.

Pressurized suits, special breathing and muscle-tightening regimens enable the pilots to stop the blood from rushing to their feet and stay conscious at up to 9 Gs. Sustained exposure above that force of gravity can kill or maim, experts say.

Collins' new role is all about performing acrobatics at hundreds of miles an hour in the team’s trademark diamond formation.

With the F-16, Collins said, “You have to respect the power. It’s incredibly easy to fly.” The stick and throttle each have more than a dozen of the jet's most vital controls. So pilots, he said, often liken flying it to playing the piccolo.

It's up to the team's boss to fly as predictably as possible — calling out the timing of each twist and turn, climb and dive over one of the two radio channels. The second channel, which Collins sets at a lower volume, is for the solo pilots.

“This is our way of also honoring the military, the veterans and all those who gave their lives for our country,” said Gorman.

“It’s awesome to represent the men and  women who came before us and made the ultimate sacrifice,” said Collins.

The 16th annual Bethpage Air Show at Jones Beach runs Saturday and Sunday of Memorial Day weekend and is headlined by the U.S. Air Force Thunderbirds.

10 must-see acts at the 2019 Bethpage Air ShowThe 16th annual Bethpage Air Show brings back a fast-paced high-, low- and upside-down-flying spectacular. A pilot 'doing a different kind of dance' in the skyOne stunt pilot was inspired as a teen working by an airport, where he saw "all these cool airplanes flying around -- and acrobatics looked amazing to me."