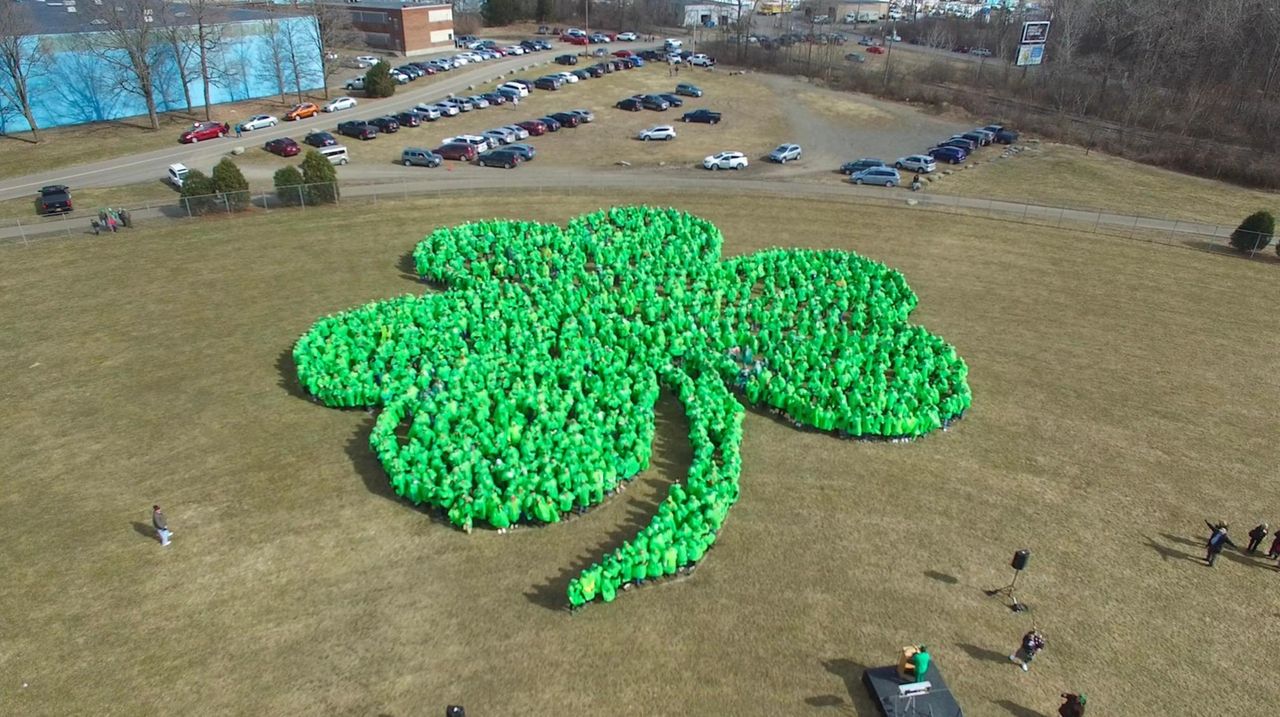 The city of Elmira, New York attempted to beat the Guinness World Record for the largest human shamrock on March 17, 2019.  Credit: James B. Gensel

Farmingdale's attempt to beat the Guinness World Record for the largest human shamrock at Howitt Middle School's football field has been canceled by organizers amid coronavirus concerns.

"There is nothing more important to us than the health and well-being of our community," said Joe Fortuna, co-founder of The Nutty Irishman and 317 Main Street. The event was previously set for Saturday, March 14 at 3 p.m., in a celebration of St. Patrick's Day.

"The cancellation comes following the heightened concern of community spread of the coronavirus, COVID-19, alongside the Centers for Disease Control and Prevention (CDC) recent guidance to avoid large crowd gatherings," an emailed statement read.

Proceeds ($10 per participant) were set to go to the St. Baldrick’s Foundation, which raises money for pediatric cancer research and development.

“We are going to have a big shamrock painted on the field which people can fill in,” Nutty and 317 co-owner Kevin Cleary said in advance of the event's cancellation. Participants were to be given a green poncho. "You must put the poncho on and work your way through to fill out the shamrock.”

In order to officially get in the Guinness Book of World Records, organizers making an attempt would be required to fill out an application prior to an event. Then comes a 27-page document of specific instructions that would have to be followed as to how the activity must be captured.

“Everything needs to be recorded. There must be video and photo evidence throughout the entire day,” said Cleary. “You also need two third-party witnesses to sign off on various documents and proof of how you are counting the people.”

Rob Madden, a certified commercial drone pilot, planned to fly his DJI Mavic 2 Pro above the field to capture the entire scope of the event.

Documented material would need to be sent to Guinness to be analyzed for a determination on whether the record was beaten or not.

A massive effort to beat the human shamrock record was made last year in the city of Elmira in upstate New York. Despite drawing 1,200 people, the attempt was snagged on a technicality.

“There were spaces in our shamrock,” said Elmira mayor Dan Mandell. “If you look at the photos there are some, one area is more densely filled. They said that it didn’t qualify. We had to condense it. The rules are the rules.”

Jennifer Herrick, executive director of Elmira Downtown Development said the city planned to try again on Sunday, March 15 -- this time with no gaps and extra gear. "We drew 1,200 people, but turned away another 300 because we didn’t have enough ponchos,” she said.

Regardless of the competition, Farmingdale was geared up to complete the task.

“This village has so much spirit, I think we will do it without a doubt,” said Farmingdale mayor Ralph Ekstrand, ahead of the cancellation. “Dalers can do anything.”

Ekstrand even reached out to Mandell to broker a bet between the two communities.

“I want to do a little friendly wager with the mayor of Elmira. Maybe a bushel of upstate apples for a case of Farmingdale-brewed beer from Lithology,” said Ekstrand. “Who knows, we may become sister villages.”

In fact, a third attempt was set to take place in Willoughby, Ohio on Sunday, March 15 as well.

“We figured we were going to feel some type of pinch from other communities this year,” said Herrick. “A little healthy competition doesn’t hurt anybody.”