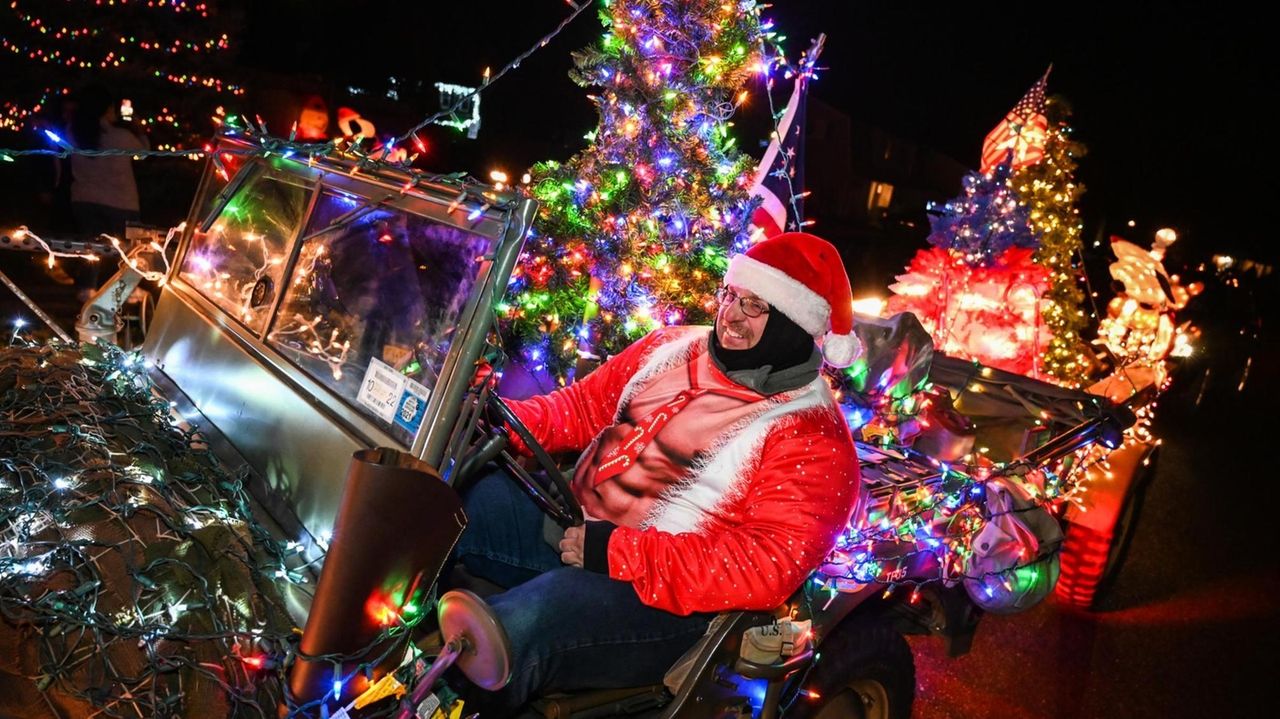 As the traditional holiday festivities are limited this year due to the pandemic, the Christmas Convoy made its way through Long Island neighborhoods on Friday night. Credit: Newsday / Steve Pfost

For those distraught over the cancellation of their holiday events, here comes the Christmas Convoy. These Long Islanders are moving throughout Nassau and Suffolk spreading cheer with their cars covered in multicolored lights.

"We try to reach as many communities as we can," says president Raymond Schettini, 29, of Smithtown. "Everyone is very appreciative this year, especially with COVID. It brings a sense of normalcy."

Schettini has 20,000 lights on his 2009 Hummer, all computer-controlled with wireless microwave antennas which he powers with two massive deep-cycle batteries with an upgraded alternator and a high-capacity inverter inside the car.

"I broadcast Christmas music from speakers on top of the truck and the lights dance to music," says Schettini. "There’s even an inflatable Santa and two inflatable candy canes on the roof. We try to account for everything."

Schettini’s fascination with Christmas lights dates back to high school.

"I got the idea to put a strand of lights on my truck and it kept growing every year," he says. "Once you start, you just have to keep adding lights. You think, ‘How can I go bigger?’ "

His right-hand man Chris Botto, 28, of Selden caught onto the hobby and began joining Schettini’s Convoy.

"It all started because we didn’t have houses. We didn’t know what to decorate so we decided to decorate our cars," says Botto, who serves as the Convoy’s second vice president. "The lights bring us together."

Botto’s 2018 Ford F150 carries a 4-foot by 6-foot billboard in the truck bed that runs off Schettini’s laptop promoting the Convoy.

This year, things are a bit different for the Convoy because of the pandemic, as there’s no personal contact. They’ve been joining Santa parades with local fire companies like Selden, Nesconset and Coram as well as simply driving through neighborhoods such as Centereach, Wantagh, Levittown, South Farmingdale and Massapequa. All of their appearances can be found on their social media outlets and, sometimes, they even livestream them in the process.

"There’s not as many meet and greets," says Botto. "When we park inside a lot; people don't get out of their cars. They tend to drive-by and snap photos."

Schettini adds, "We usually give out candy canes but, unfortunately, we can’t do that this year."

Matt Marrocco, 30, of Selden has a candy theme on his 2019 Dodge RAM pickup truck featuring 10 candy canes lit up on his front grill, plus 800 white, red and green LED lights, an illuminated wreath and rock lights in his wheel wells giving off a glow underneath the vehicle.

"I get constant people giving me thumbs ups and honking car horns," says Marrocco. "People put on their jackets and come out of their homes to see us going by."

"It’s all synchronized to music and it puts on a little show," says Steckowski. "People take pictures with it and dance around. I enjoy watching people enjoy it."

Anthony Weiss, 25, of Selden started getting his truck ready to roll by mid-November, so he could join the Convoy for his third year right after Thanksgiving.

"We don’t ask for any money. We do it to get reactions," says Weiss, who has 4,000 lights on his 2000 Jeep Cherokee with a Santa Claus climbing up a ladder on the side. "Many people feel this holiday season is a wash with the pandemic because you can’t really do much. But when we pull up with all these lights and music, it immediately puts a smile on people’s faces."